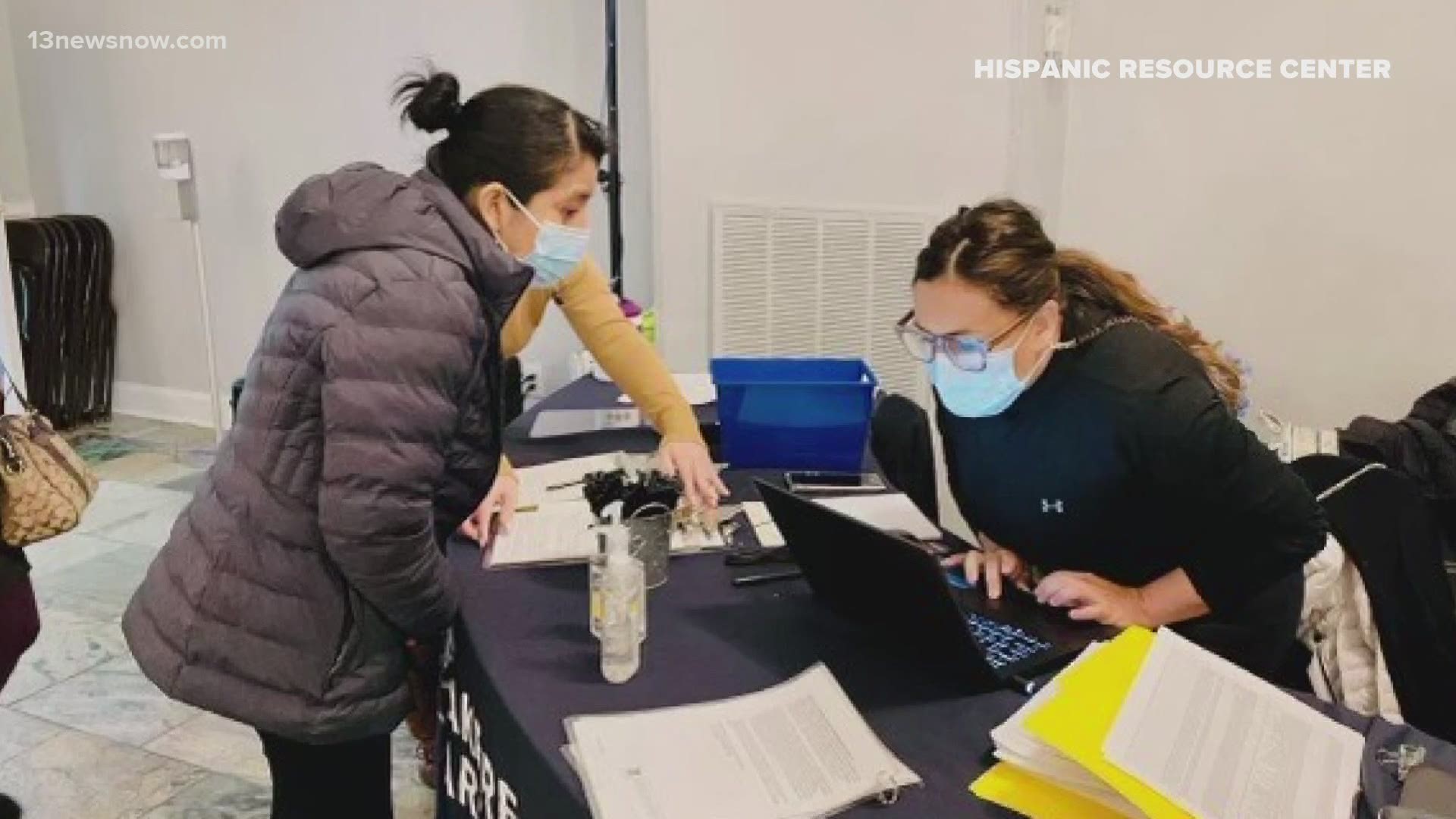 HAMPTON, Va. — Elizabeth Torres and Patricia Bracknell keep their ears to the ground in the Hispanic community in Hampton Roads. Their group, the Hispanic Resource Center of Coastal Virginia is encouraged by the state's latest efforts to vaccinate Latino Americans.

"My heart is so overwhelmed that we are moving in the right direction," said Bracknell.

They're talking about the launch of a statewide vaccination pre-registration website and call center. Governor Ralph Northam said the call center will prioritize seniors at least 65 years old and Spanish-speaking people.

VDH representative Melissa Gordon said the state hired 750 call center agents, and of those, 80 are native Spanish speakers, with that number growing.

"That's amazing for us because the Hispanic community needs a number to call," said Torres.

Torres, the HRC director, and Bracknell, who oversees the group's community outreach, spent their Friday night handing out supplies for a drive-thru food drive in Hampton. Shortly before that, they helped people register and get their COVID-19 vaccination.

However, a language barrier has caused some issues getting the community ready for the shot, said Torres.

"Providing the correct information, literature, and date has been very challenging to offer in Spanish," she said.

Torres and Bracknell said at some point they noticed confusing translations on the VDH website they believe may have been caused by the state's early use of Google Translate.

"We cannot read intentions. We can only read the black and white," said Torres. "So when translations go wrong, it sends the wrong message out to our community."

A 2014 report by the U.S. Department of Labor Civil Rights Center advises against using machine translations for "vital document, including webpages, when you do not have a trained, human translator for that language available to review and correct the translation."

Gordon said the state used Google Translate for the first two days of the site's launch "due to a delay in loading the manual Spanish translation."

"Now that the manual translation has been loaded, future updates to the form will also be manually translated," said Gordon.

She also said VDH uses a professional service to translate the site into Spanish and will continue to work the service for future updates to the statewide pre-registration system.

"In addition, we work with the Equity team to validate the translations provided by the professional service, as a final check to ensure not just the quality and accuracy of the translated material, but also its relevance to our Spanish-speaking residents," Gordon said.

A published study by the University of Virginia investigating antibodies and herd immunity found Hispanic participants had the highest rate of exposure to COVID-19.

Advocates, like Torres and Bracknell, believe the focus on Spanish-speaking communities by the state will keep more people in the community safe.