Do you know how many children are vaccinated in local schools? 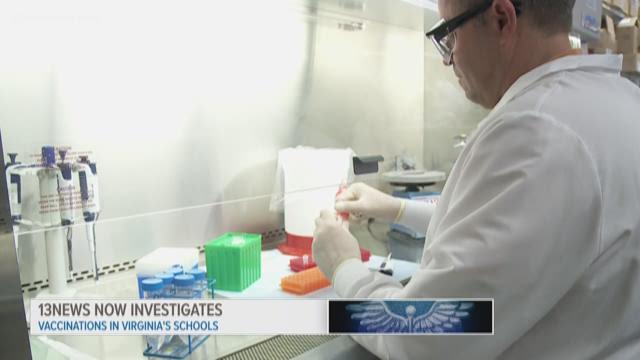 RICHMOND, Va. — Every school in Virginia, both private and public, is required to report how many children are fully vaccinated. Students must be immunized to attend school unless they have a religious or medical exemption.

“Immunizations are required for a reason. They’re incredibly effective. They’re safe. They help prevent these outbreaks of vaccine-preventable disease that we’ve seen occurring now throughout the country with measles," said Marshall Vogt, epidemiologist for the Virginia Department of Health.

The disease declared ‘eliminated’ in 2000 has spread to more than 20 states so far in 2019, but not Virginia or North Carolina. Scientists in Virginia's Public Health laboratory have tested eight suspected cases of measles so far this year, all came back negative.

Vogt said the absolute best way to prevent the spread of a disease like measles is through vaccinations.

“The more contagious a disease is, the higher the immunization rate needs to be to contain that illness and prevent an outbreak," he said.

However, determining just how high the immunization rate is can be difficult.

The Virginia Department of Health has two ways of tracking numbers. The first is through school self-reports, which are submitted to the state within 30 days of the start of the school year.

Students who are fully immunized, exempt or have at least one dose of every vaccine are counted as compliant. Compliance rates hover around 93 to 96 percent for kindergartners and sixth graders.

But, health department officials use a second method to figure out how many students are actually immunized – a statistical technique called the Virginia Annual Immunization Survey.

“Because it’s not self-report and because it’s more statistically sound, we think that’s a more reliable indicator of our immunization data," Vogt said.

This survey paints a different picture. Looking at sixth-grade results from 2012 to 2017, the compliance rate dropped from 93 to 82 percent, a concerning trend.

Does that really mean almost one-fifth of all sixth graders are un-vaccinated?

For one, the VAIS is conducted on the very first day of school. The school self-reports are submitted within 30 days of school starting, so students have more time to get caught up on their vaccines after the summer ends.

Also, the school self-reports count students with conditional admittance as compliant. That means they’ve had at least one shot of every required vaccine but may be missing additional doses. The statistical survey doesn’t count these students as fully immunized.

“When you really look at it, more children are probably immunized than when we actually gather those [VAIS] numbers because they get excluded from school or they have a conditional enrollment, and then they go and get those vaccines," Vogt said.

But the gap raises the question – do we really know what percentage of students are fully vaccinated? If the annual survey is more reliable, are the actual numbers of immunized students closer to the 80 percentile range than the 90 percentile range?

Vogt said even a drop of a few percentage points can lower the 'herd immunity' and put a group of people at risk. However, he believes the actual immunization rates in schools are closer to the mid-90s.

What about students who are exempt? Virginia’s exemption rate for medical and religious reasons doubled between 2006 and 2017, but the total number of exempted students remains small at just 1.2 percent. Vogt said he’d be concerned if he saw a jump up to 4 or 5 percent.

If students are not exempt or fully immunized within the first month of the school year, they should be held out of school, per state law.

“But then it’s up to the schools to actually enforce that, know what those requirements are, do those assessments and to ensure that those students that aren’t properly immunized are excluded until they can go get their vaccines," Vogt said.

So the true percentage of immunized students is likely somewhere in the middle of the two surveys, with individual school officials responsible for following up with students in need of additional vaccinations.

Vogt said, just like the rest of the country, he's seen more anti-vaccination sentiment in recent years. However, he said it thankfully hasn't affected rates or outbreaks in the Commonwealth.

You can view the annual school self-reports for each school at this link on the VDH website.