A new initiative directed by the National Institutes of Health is focused primarily on helping to solve the opioid crisis. 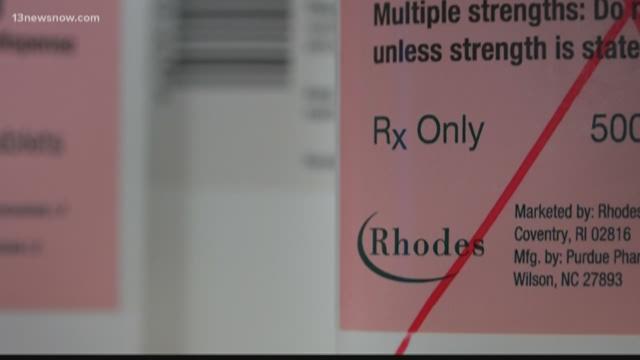 NEWPORT NEWS, Va. (WVEC) -- Ebony, a mother of two teenagers, said she feels pretty good about her recovery from opioid abuse. She enjoys her support group at the Hampton Roads Clinic, run by the Hampton-Newport News Community Services Board, and she recently married her best friend.

She readily admits, her journey has been anything but easy.

"I was trying very hard to look liked I had it all together and everything was normal, and I didn't at all," Ebony told 13News Now.

Her problems grew out of a host of medical issues including rheumatoid arthritis, fibromyalgia, lupus, and cancer. That placed her among the 100 million Americans who suffer with chronic pain.

Opioid abuse would be next.

During the course of several years, her doctor prescribed several pain killers, including Fentanyl patches and Percocet. Ebony said she overdosed on pain pills for at least 10 years.

"Every morning, the first thing I did when I woke up was take pills. I didn't get out of bed before I took pills," she explained.

Ebony now takes Methadone at the clinic to help treat her addiction and said efforts by the medical research community to find better ways to treat pain are long overdue.

"Nobody has looked at the underlying issues for each person. You just can't put a label on ‘we're going to do this for everybody,’" she stated.

At the National Institutes of Health (NIH) Clinical Center in Bethesda, Maryland, opioid addiction is becoming a central focus of hundreds of millions of dollars of research.

Thomas told 13News Now NIH is pulling together a public-private partnership to attack pain research from several different angles. Several goals have been identified for the collaboration, including examining potential new uses for existing and abandoned medications, and creating new combinations of existing drugs.

Potential non-pharmacological solutions are being explored as well.

NIH also examines better ways to treat opioid addiction. In fact, the center was the first to introduce a nasal-spray version of Naxolone, the drug that reverses the effects of an opioid overdose, into the market.

Ebony recalled the day she finally got help: November 27, 2015. A friend, who ironically was the one from whom she bought her pills, told her about the Hampton Roads Clinic. Ebony has been clean now for almost two years.