Eating shellfish taken from the closed areas at this time could cause gastrointestinal illnesses including norovirus, hepatitis A, and shigellosis. 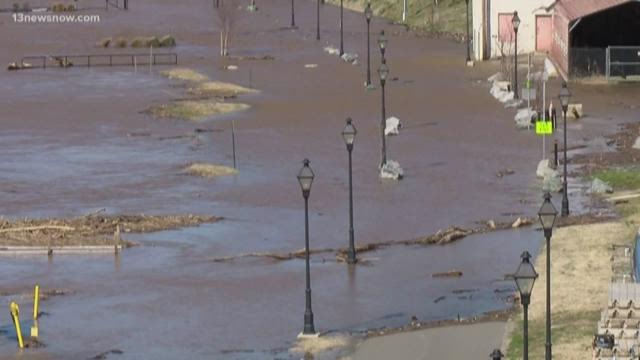 RICHMOND, Va. — The Virginia Department of Health made an emergency closure of parts of waterways in Hampton Roads to shellfish harvesting due to floodwaters caused by tidal flooding and excessive rainfall.

The emergency closure will take is effective in the Lynnhaven River in Virginia Beach, the James River downstream of the James River Bridge, and the Back River in Hampton and Poquoson on September 7, 2019.

The affected shellfish are bivalve mollusks including oysters and clams, but not crabs or finfish.

Monitoring shellfish harvesting beds is an important means to protect the health of Virginians. The Division of Shellfish Sanitation watches shellfish beds for contaminants after major storms to ensure any shellfish harvested there do not contain harmful substances that will make consumers of these shellfish ills.

Heavy rainfall and storm surge from Hurricane Dorian is projected to cause extensive flooding impacting the Hampton Roads region.

Due to potential microbiological and chemical pollution hazards, shellfish taken from areas affected by the emergency closure is currently unacceptable for consumption.

Eating shellfish taken from the closed areas at this time could cause gastrointestinal illnesses including norovirus, hepatitis A and shigellosis.

View the map below: