When their parents saw the 150-year-old explosive, they immediately called the York-Poquoson Sheriff's Office. Naval Weapons Station experts will detonate it. 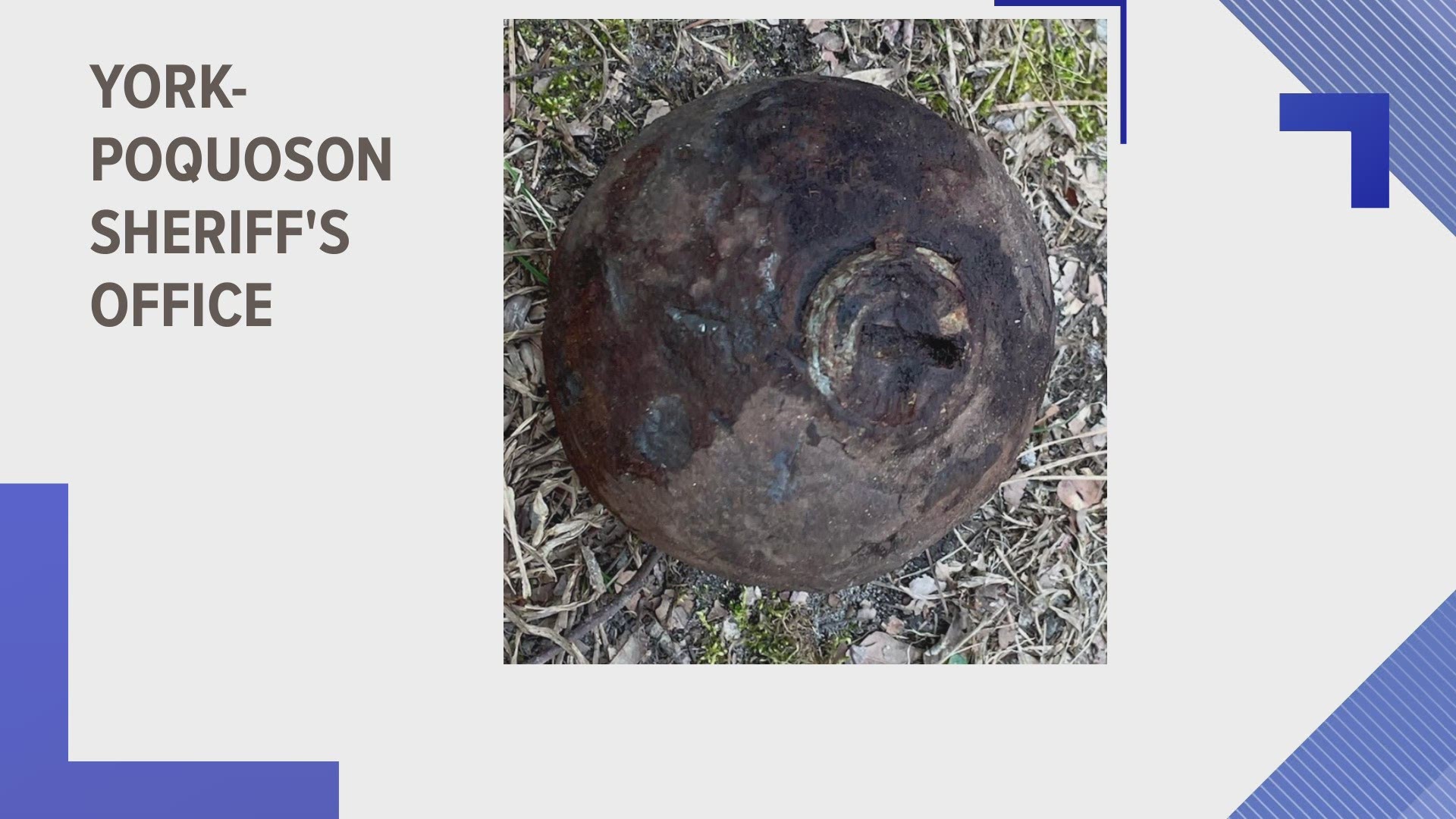 YORK COUNTY, Va. — Wednesday night, some children who had been using a metal detector in the Seaford area of York County brought home an unusual find - a Union Army cannonball from the Civil War.

It had been about two feet underground before the children dug it up.

"It was probably about 20 pounds, it was so heavy!" one of the kids said.

When their parents saw the 150-year-old explosive, they called the non-emergency line for expert help.

Joshua Thompson, the father of 12-year-old Malachi and 10-year-old Aviel, said he didn't believe his kids and their friends (Jackson Newbern, 6, and Kai Baker, 10) when they walked up to the door and said, "We found a cannonball."

Thompson called the York-Poquoson Sheriff's Office, and the dispatcher told him, "You're going to see a lot of my friends in a few minutes."

Sure enough, Thompson said there were soon seven or eight sheriff's cars, a fire truck and an ambulance at his Mastin Avenue home.

Deputies waited with the cannonball until experts from the Naval Weapons Station could make it over to positively identify the object.

"The cannonball possibly contained black powder based on the design," wrote a YPSO spokesperson. "EOD collected the cannonball and advised that they would be disposing of it by an explosion."

Thompson said all the precautions "definitely changed my perspective" about the cannonball - knowing that it could still have been dangerous, and his wife and kids were holding it, made him grateful everything turned out okay.

However, he said it was exciting to see the historical significance of Hampton Roads firsthand.

"The history is rich, it's thick, its heavy, and to know that we found a piece of history makes us even more a part of this great county," Thompson said.

The York-Poquoson Sheriff's Office shared about the find in a tweet that would sound bizarre for most areas of the United States, but fits right in with the Historic Triangle. They called it "Finding a Cannonball in your yard 101."

Essentially, the advice is: don't mess with it. Even if you're not sure about it being a cannonball, call for expert help.

Finding a Cannonball in your yard 101

If you find something that looks like a cannonball in your yard please call 911 and let us know.

Last night, we were called out to Mastin Ave in the Seaford area for what turned out to be a #civilwar #cannonball from the #unionarmy! pic.twitter.com/mfBeGIM46q