Many of the enslaved people freed from the President's plantation settled nearby. Their descendants are now talking about their past and their future. 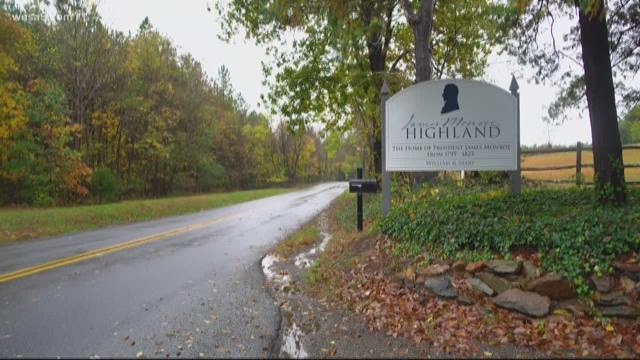 CHARLOTTESVILLE, Va. — It’s perhaps the most jarring contradiction of our nation’s beginning: How could the founders who wrote, "All men are created equal," also buy and sell men, women, and children?

At President James Monroe’s old plantation in Charlottesville, they’re flipping the script and rewriting the story with the help of descendants of the people he enslaved.

The winds of change are blowing through Highland – the old plantation where President James Monroe enslaved as many as 250 people over his lifetime.

The narrative on the plantation is shifting, thanks in part to George Monroe, Jr., who traces his family tree here back seven generations to a great-great-grandfather who was enslaved on Monroe's plantation.

"Mixed emotions every time I come up that hill," he said. "On one side, I think about my ancestors who pretty much worked this plantation. But then I think about the fact that I’m actually able to come back and have the conversation about what’s next."

RELATED: WATCH | 1619: The First Africans in Virginia and the Making of America

As a child, Monroe remembers driving by the sign on the highway for James Monroe's Highland and wondering if his family was somehow connected to the country’s fifth president.

He said when he asked relatives, "You would get either, ‘We don’t really talk about those things.’ Or you would get just a blank stare like, ‘Yeah, we’re familiar.’"

After the Civil War, many of the descendants settled here, in a community they call Monroetown. Many of them still live near here. It is just about 6 miles from Highland. But it’s only in the last few years that they’ve started talking.

For George Monroe, even looking at a 300-year-old tree offers not just a connection to his family tree, but a different kind of history.

"This tree has witnessed the Revolution," he said, looking up at the massive, crisscrossing branches. "It's witnessed... slavery, it’s witnessed my people here... It’s witnessed, potentially lynchings... There was a lynching 10 miles from here, in Fluvanna County. During the same time, this tree has been here."

George Monroe and other descendants have come back to Highland just as its curators are finding even its archaeology has been misunderstood. The house here now was built on top of the burned ruins of President Monroe’s home. But the guest house, built by two enslaved craftsmen, still stands.

As does a 1840s building where some of the enslaved people lived.

Sara Bon-Harper, executive director of James Monroe’s Highland, said it came as a surprise that descendants of the enslaved people were living nearby. But she said it shouldn't have been.

The new discoveries are allowing the museum to write history with the input of the descendants.

"There are different threads that we are pulling on together that will become the fabric of the new site interpretation," Bon-Harper said.

The American philosopher George Santayana once wrote, “Those who cannot remember the past are condemned to repeat it.”

"It feels not just necessary, but urgent to do this history here now," she said.

"My great-great-grandfather might have been a slave, and his father was a slave here, but guess what, three or four generations later, he has doctors, lawyers, entrepreneurs, businessmen, teachers... Now that I have my children, I’m telling them the same thing, ‘Be better than me. Don’t take no for an answer. Regardless of what you’re faced with, you can overcome it, because this is where you came from.’"

RELATED: George Mason University raises funds for a memorial dedicated to the people their namesake enslaved