Since stay-at-home orders were announced, many people are asking how child custody agreements could be impacted. 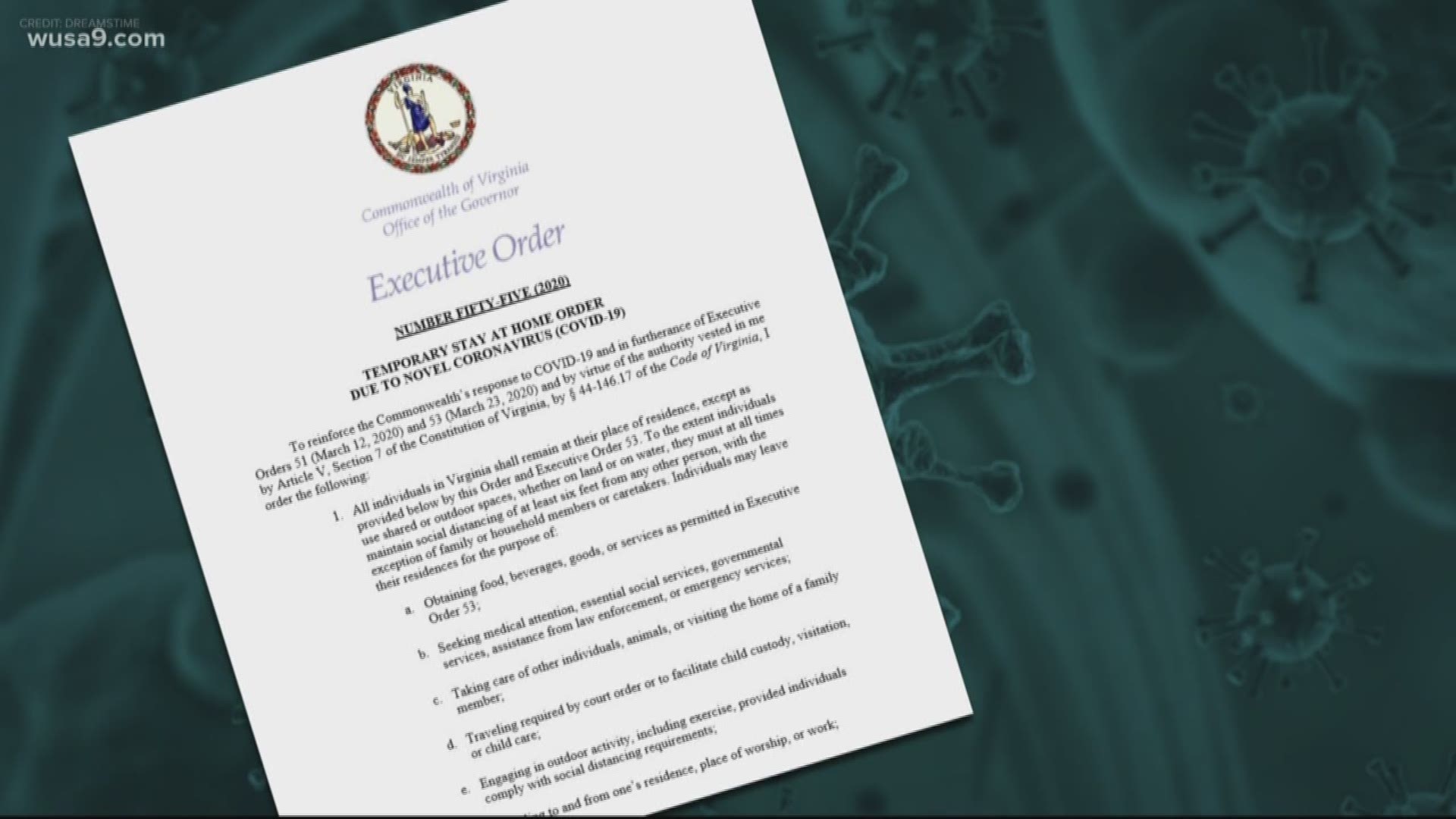 Jimmy Waldron lives in Fredericksburg Virginia, but his 14-year-old son and 12-year-old daughter live in West Virginia. According to his court ordered custody agreement, every other weekend he is supposed to have custody of his kids. He’s worried about how he can do that with the new stay-at-home orders in place.

According to the stay-at-home orders issued in Virginia, West Virginia and Maryland where Jimmy meets to exchange the children, traveling by reason of a court ordered custody agreement is permissible.

RELATED: Maryland Stay-At-Home order: Here's what it means, and what needs to close

Harry Siegel is a family lawyer in Maryland and is not affiliated with the Waldron case. He spoke to WUSA 9 specifically about the Maryland order and it’s potential implications

"So it’s complicated, said Siegel, "under the governor’s proclamation from yesterday, travel issued through a court order is still permitted ... elsewhere in the order he says that people should refrain from crossing state lines. Not shall, but should."

Gov. Hogan suggests that people who cross state lines should self-quarantine for 14 days upon return, but in section 2b it says that, persons transiting through Maryland who have only minimal contact with Maryland, i.e., only stopping for fuel, food, or other necessary supplies, not making contact with anyone for more than three minutes at a distance of less than six feet, are exempt from having to self-quarantine.

But what if one parent is concerned about following the custody agreement and transporting their child across state lines? Could they be held in contempt?

Virginia based family attorney Dan Dannenbaum is also not affiliated with the Waldron case. He spoke to WUSA9 about Virginia’s stay-at-home order and says it depends on whether the judge believes there was malice in the action.

Dannenbaum says, yes, you could be held in contempt. The decision of whether that violation is deemed to be "malicious or a willful violation of a court order" versus an attempt to protect your child is "going to be up to the judge and up to your explanation," he explained.

If the health and safety of your child is the true reason for not following a court order, Dan recommends reaching out to your child’s pediatrician for a note.

"It’s a very risky strategy to withhold the child from visitation," said Dannenbaum "but if you’re doing that you better have good reasons. You’ve got to be able to look a judge in the eye and preferably you have the back up of a pediatrician that told you not to transfer the child at this time."

Even then, Dannenbaum says it’s a case-by-case basis. When the courts are back in session, it’s really up to the judge and whatever evidence you bring to decide if you will be held in contempt. If you are found to be in contempt, he says your current custody agreement could be changed.