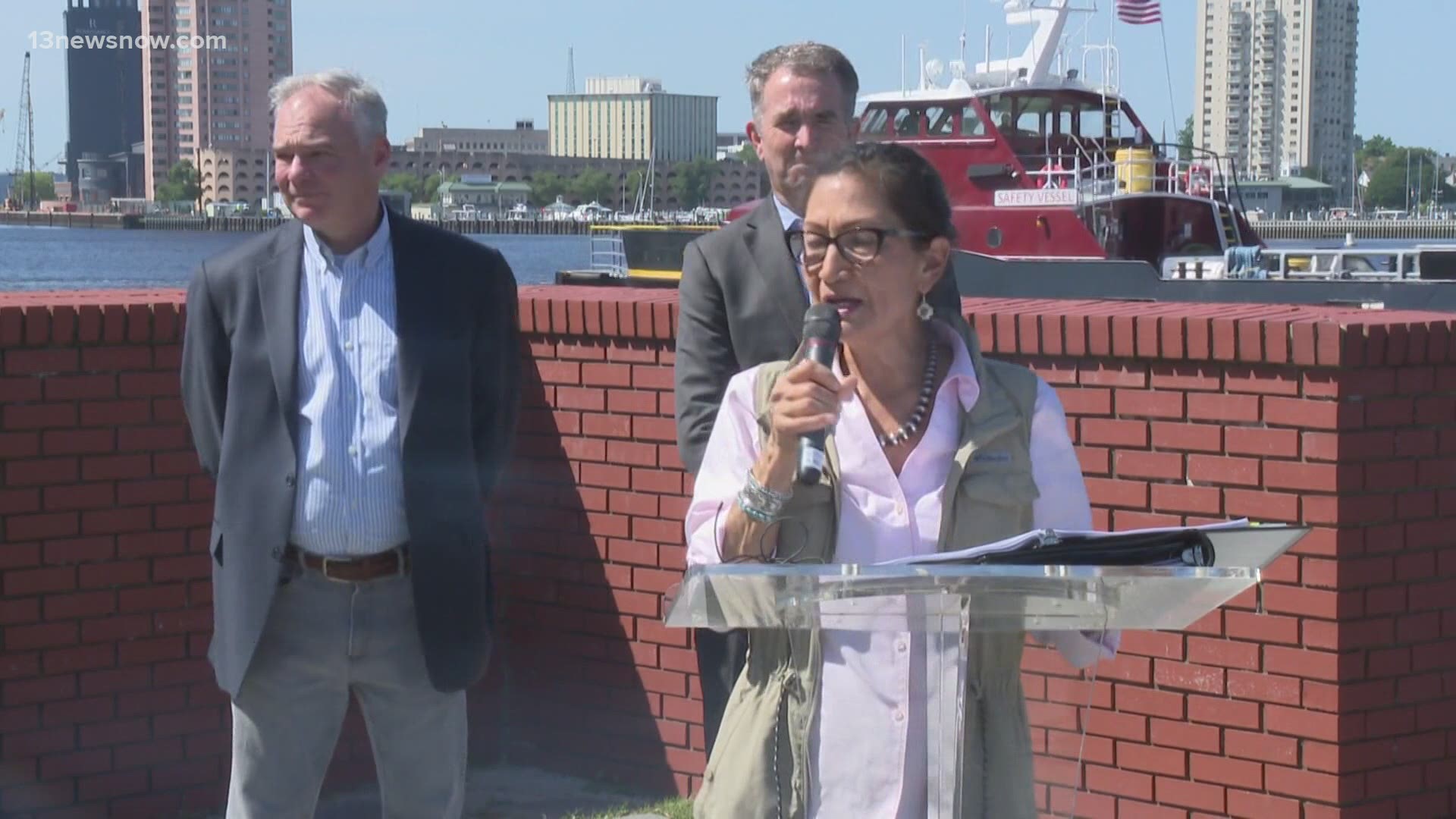 NORFOLK, Va. — Secretary Haaland started the press conference in Norfolk by acknowledging she was standing on the ancestral land of the Chesapeake and Lumbee Indian tribes. She used this acknowledgment as a platform to express the importance of green and cleaner energy use.

Haaland says Hampton Roads is one step closer to a big approval with the latest announcement of environmental reviews for the hundreds of wind turbines expected to be built off the Virginia Beach coast. It is part of Dominion Energy's Virginia Coastal Offshore Wind project and is considered the largest wind farm project in the nation.

Those environmental reviews will be done by the Bureau of Ocean Energy Management.

"Offshore wind is critical. It's a critical component of the president's ambitious agenda," said Haaland. "The demand for offshore wind energy has never been greater."

RELATED: Dominion Energy takes on what will be the country's largest offshore wind project

Secretary Haaland, who started a clean energy task force in the Interior Department, says these environmental reviews are a big step forward in the approval process.

"If approved, the project calls for the construction and operation of up to 205 turbines, generating up to 3,000 megawatts of electricity," said Haaland.

Dominion Energy wants to build these wind turbines to tower 800 feet in the air, miles off the coast. Their big size is set to make a big promise for Hampton Roads, creating clean energy and thousands of jobs.

"We estimate that at the end of the day, this could generate approximately 14,000 jobs right here in Hampton Roads, right here in the Commonwealth of Virginia," said Governor Northam. "So, this is a win-win. It's a win for our environment. We need to move away from carbon, it's the right thing to do and we'll also put people to work."

The two wind turbines originally established for research off the coast already produce enough energy for 3,000 homes. Now, this new project would promise to deliver power up to 660,000 homes and businesses by 2026.

Senator Kaine says it'll do more than just provide electricity along the coast, saying,  "Hampton Roads is the second most vulnerable community to sea level rise in the United States. The Commonwealth will now be a leader in offshore wind, in decarbonizing our economy."

Dominion Energy already operates an offshore wind research project with two turbines. Officials say this will help them provide more data for the environmental review before the final project is approved.