The juror is also asking the court to make the jury proceedings public. 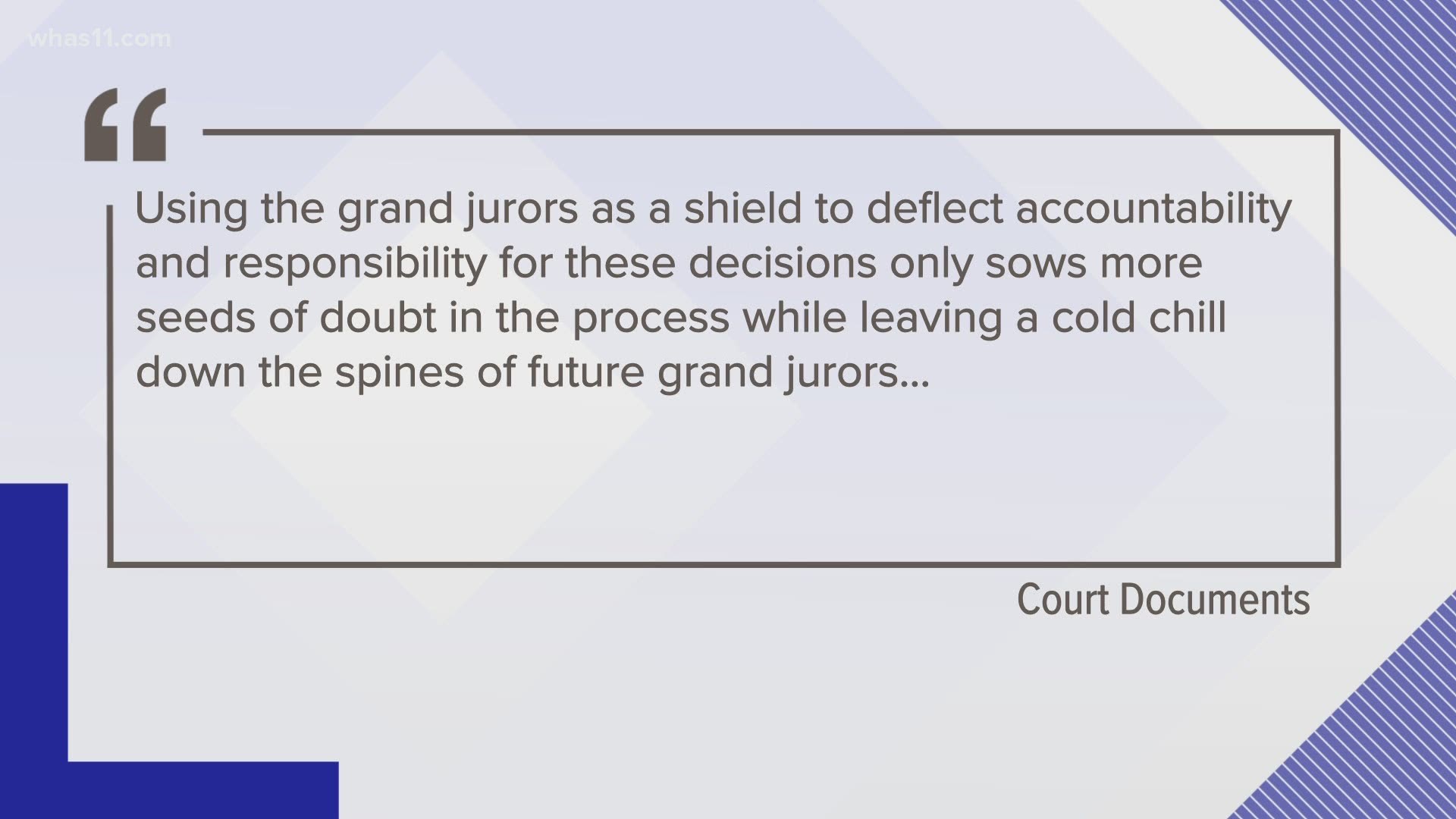 LOUISVILLE, Ky. — Just days after the family and attorneys for Breonna Taylor demanded Attorney General Daniel Cameron to release findings in the case, a juror who served on the Grand Jury has filed a motion requesting grand jury records and transcripts to be released.

The motion was filed anonymously in Louisville’s Jefferson Circuit Court Monday. The juror said there is no desire for notoriety or money – "only the truth, the whole truth and nothing but the truth."

The suit calls out Cameron for pinning the decision not to file charges against the three officers who fired weapons the night Breonna Taylor was shot and killed on the grand jury, but not giving any explanation.

"Using the grand jurors as a shield to deflect accountability and responsibility for these decisions only sows more seeds of doubt in the process while leaving a cold chill down the spines of future grand jurors,” the court document said.

Attorney Kevin Glogower said he believes his client felt Cameron laid a lot of responsibility on the decision at the grand jury's feet. He also said there were several unanswered questions that the anonymous juror believes the public should know.

Taylor’s family attorney Lonita Baker echoed the call for records to be released.

“The public has a right to know. Daniel Cameron promised transparency, but he's given none,” she said.

She and the rest of the Taylor legal team have been calling for the transcripts to be released since last week.

"I think him being an elected official he has a responsibility to this community, and he is failing in that regard,” she said. “We have given reasonable requests -- there should be no reason he hasn't responded."

Baker is hopeful this new call for transparency may make a difference.

The juror said they are counting it out writing in the document.

“The legal system has placed the grand jurors in this matter on an island where they are left to wonder if anyone who finds them will treat them well or hold the pain and anger of the lingering questions against them."

The juror also references what Cameron said towards the end of his speech during the Taylor case announcement.

“And I will fight for those across our state who feel like their voice isn’t heard, who feel marginalized, judged, and powerless to bring about change. In a world that is forcing many of us to pick a side, I choose the side of justice. I choose the side of truth. I choose a path that moves the Commonwealth forward and toward healing. You have that choice as well. Let’s make it together,” Cameron spoke.

The grand juror said Cameron has another choice, encouraging him to choose truth and choose justice.

The Grand Jury is meant to be a secretive body. It’s apparent that the public interest in this case isn’t going to allow that to happen. As the special prosecutor, our team has an ethical obligation not to release the recording from the Grand Jury proceedings, and we stand by our belief that such a release could compromise the ongoing federal investigation and could have unintended consequences such as poisoning the jury pool. Despite these concerns, we will comply with the Judge’s order to release the recording on Wednesday. The release of the recording will also address the legal complaint filed by an anonymous grand juror.

We have no concerns with grand jurors sharing their thoughts on our presentation because we are confident in the case we presented. Once the public listens to the recording, they will see that over the course of two-and-a-half days, our team presented a thorough and complete case to the Grand Jury. Our prosecutors presented all of the evidence, even though the evidence supported that Sergeant Mattingly and Detective Cosgrove were justified in their use of force after having been fired upon by Kenneth Walker. For that reason, the only charge recommended was wanton endangerment.