Despite a state law intended to provide protections for all students, many school divisions are choosing their own policies. There's no system for accountability. 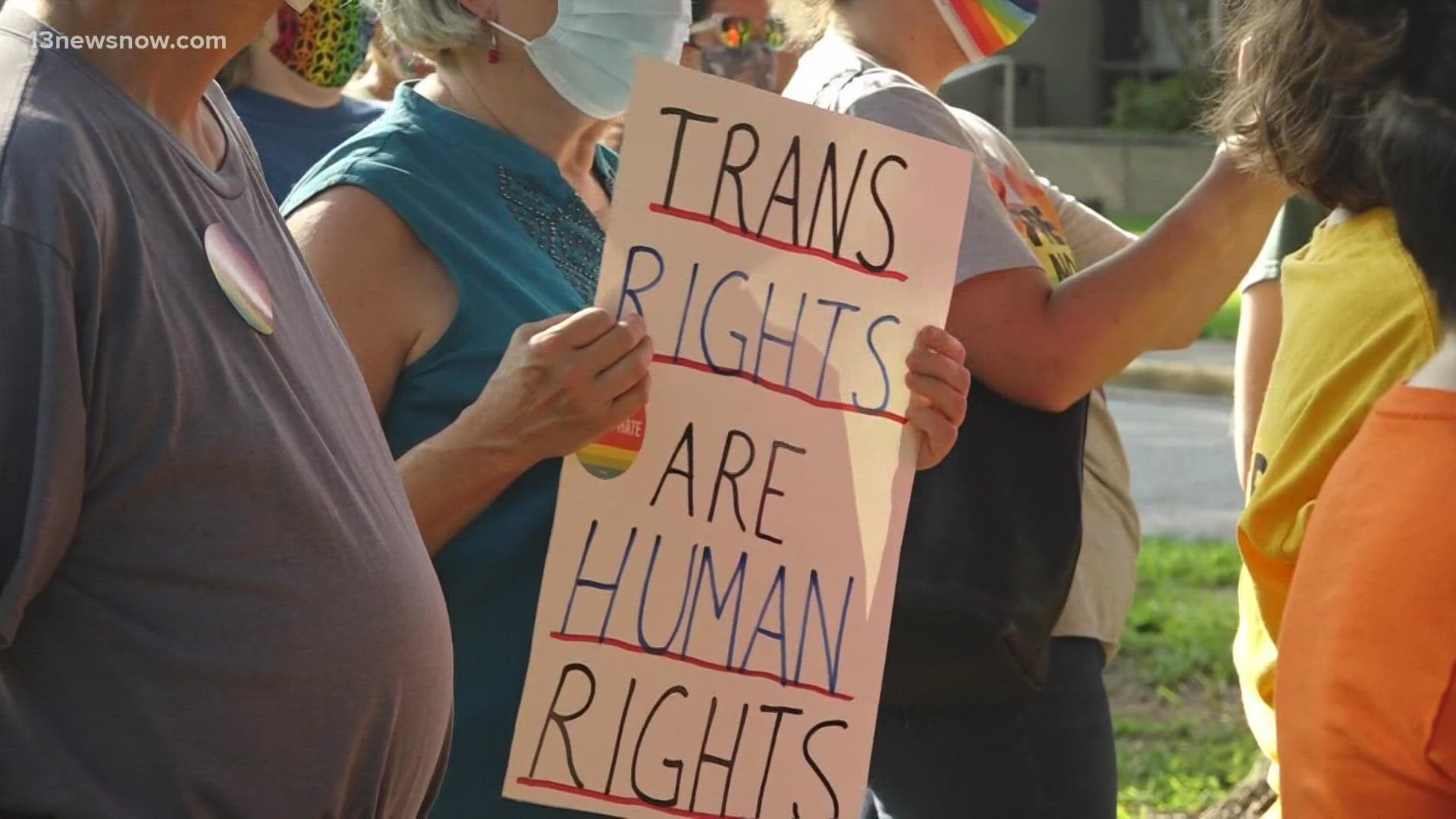 CHESAPEAKE, Va. — Every parent wants their child to be treated fairly, but some school systems are adopting very different guidelines against transgender student discrimination, despite state efforts to provide specific protections for all students.

The Virginia Department of Education says it doesn't know which school divisions have adopted its model policies and it won't keep track.

The new legislation does not require school boards to report local policy actions to the VDOE.

As a result, transgender student protections through school policies are not uniform across the state, and some school division policies are limited when compared to the VDOE recommendations.

LGBTQ advocates said it's a harmful result of years of efforts to create more inclusive policies across the Commonwealth.

"It’s hard to be like oh yay we’re finally going somewhere when we’re really not," said V Pritchard, a transgender and nonbinary student, in an interview with 13News Now.

A 2020 Virginia law required all schools to expand protections for transgender students by the start of the 2021-2022 school year.

Only a handful of school boards in Hampton Roads adopted the VDOE model policies in full.

"When we know that and we’re not implementing policies uniformly, it’s going to defeat the purpose of having them at all," said Stacie Walls, LGBT Life Center Director.

These school boards either made partial revisions to existing policies, decided their own policies were already good enough to meet new legal standards, or in some cases, simply added the phrase "gender identity" to existing non-discrimination policies.

The Accomack County Public Schools board did not approve the VDOE model transgender student policy at its September 21 meeting, with the motion failing in a 4-4 vote with one abstention.

ACPS board chairman Paul Bull told 13News Now the legal requirement will be addressed again "after a team has been organized to address issues of concern," including information regarding "how we would address bathroom and locker room issues once the policy is adopted."

The eight other school divisions listed above opted not to include new specific policy recommendations shared by the VDOE, such as detailed standards for transgender student identification and confidentiality, and access to restrooms and certain school activities.

Isle of Wight school board members, for example, pushed back against the VDOE recommendations, instead, making minor tweaks.

“We are going to follow the law, I just don’t want to be attached to the nonsense I have read in the other part of the VDOE recommendations," said IWCS board chair Jackie Carr in a workshop meeting on July 28.

IWCS board vice-chair Denise Tynes agreed with Carr that the VDOE model policies are optional.

“Recommendations, it did not say it was mandatory, it’s a recommendation, so we’re in compliance with what we’re doing," Tynes said.

The law requires school boards to adopt policies that are "consistent with" or "more comprehensive" than the VDOE suggestions.

However, there’s currently no way for state leaders to enforce that standard.

The Department of Education told 13News Now it does not keep track of which school divisions have which policies regarding transgender student protections, as the law doesn't require school boards to report their policies to the state.

Therefore, transgender students likely have different protections based on where they live.

V Pritchard, a transgender and nonbinary student, said the VDOE model policies include specific recommendations for a reason.

“If it’s vague and it’s not direct and to the point of exactly what’s going to happen and exactly how you’re going to handle it, it’s not going to do anything and it’s going to fall on blank ears," they said.

"There are so many trans children that are suicidal, there are so many young kids that don’t understand yet that are hurting, and these policies possibly could save their lives," Pritchard said. "Not enforcing them is doing the opposite."

The Chesapeake Public Schools school board added some of the recommended changes – including a gender-neutral dress code and allowing students to use names and pronouns they prefer.

However, CPS stopped short of defining restroom policies, as state leaders did.

“Obviously that was provided as a guide, but school divisions develop their own policies to be in compliance with those as much as possible," said Chesapeake Public Schools Superintendent Dr. Jared Cotton. "We are not going to tolerate harassment or discrimination of any student for any reason."

Ultimately, that means families would need to sue school divisions for change.

“It’s unbelievable that it’s going to be upon the families and individuals to hold the school districts accountable," said Walls. "That’s not ok at all, who has the resources and time and ability to do that.”

Some school systems now have detailed policies with specific protections, while others have a simple anti-discrimination statement.