Lawmakers push back on Navy plan to retire Truman

Ranking member of House Armed Services said, "The prevailing opinion of this committee is to refuel the carrier." 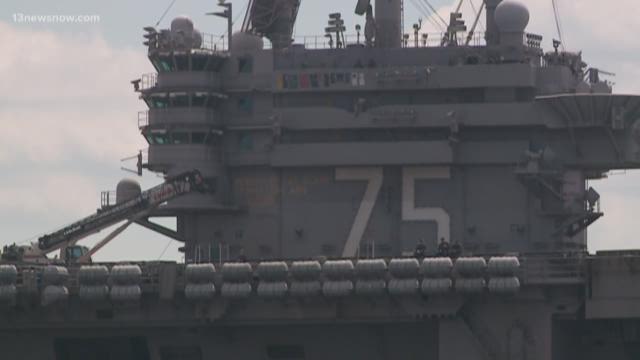 Navy leaders continued their push Wednesday to cancel the planned 2024 nuclear refueling of the USS Harry S. Truman and to retire the aircraft carrier a quarter of a century early.

The idea is to take the $4 billion in savings and spend it on new weapons systems.

But, members of the House Armed Services Committee had other ideas.

"I think the prevailing opinion of this committee is to refuel the carrier," said Rep. Mac Thornberry (R-Texas).

Navy Secretary Richard Spencer responded that the Truman decision can be reversed.

"We can still come back to address it," he said. "The Joint Chiefs are doing studies. So are we."

Chief of Naval Operations Admiral John Richardson said if Congress does vote to retain the Truman, the Navy would adapt.

"If you were to restore the overhaul of the carrier, then we would just adjust our investments into other parts of the budget," he said.

The Navy leaders were also questioned about a constantly shifting 30-year shipbuilding plan.

"It appears to the outside observer that the Navy doesn't have a shipbuilding plan that can stand for more than one year without significant changes," said Rep. Elaine Luria (D-Virginia, 2nd District). “If the vision changes every year, do we really have a clear vision? Why are there so many changes year over year, and do we really have a long-term vision toward 2050 for the Navy?”

Spencer replied, "The fact of the matter is we are adapting to changes around us."

Spencer had praise for the USS Gerald R. Ford class of carrier. He said the Ford has a 30 percent higher sortie launch rate, requires 25 percent fewer people to operate and is projected to cost 20 percent less for maintenance than the Nimitz class.