Our 13News Now investigation found that the number of broken hydrants in Portsmouth is more than double the amount of out-of-service hydrants in all other Hampton Roads cities combined. 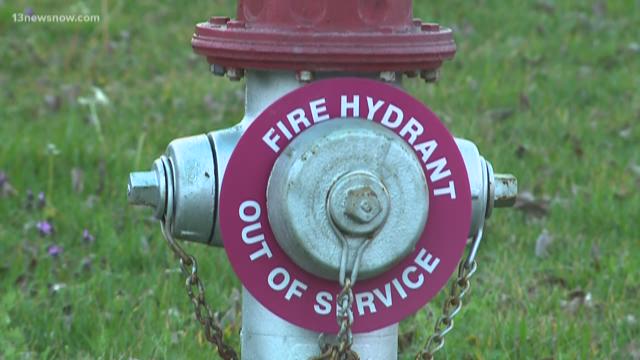 Upon arrival, firefighters found that the nearest fire hydrant was out of service. Hoffler said it's hard to tell if the broken hydrant made a difference in the outcome of this particular fire, but he said in general, "it makes a difference any time you have a delay from the norm."

Neighbors in Portsmouth said fire hydrants near their homes have been broken for years, calling the out-of-service hydrants a "major problem" and a "threat to all of our homes."

Tina Marie Shannon lives across the street from that hydrant that was broken during the Port Norfolk fire. She said it's working now, but said it was only fixed after the fire and media attention.

"Had that fire hydrant been working, I don't think the house there would've burned as long as it did," Shannon said.

Portsmouth residents Doris Cross and Jeff Fielder said the fire hydrants near her home have been broken for at least two years each.

"I've walked by for years and seen that out-of-service sign," Fielder said. "You know, it's not a soda machine."

The City of Portsmouth responded to multiple interview requests with a statement, saying Public Utilities "promptly repairs" simple problems like nozzle or drainage issues. The City said if the hydrant is broken off "at the breakaway, usually a result of being struck by a vehicle, Public Utilities replaces the hydrant as soon as possible."

The statement says if a hydrant needs to be replaced or repaired outside of these issues, Public Utilities then issues a bid for work under Portsmouth's Capital Improvement Program.

"These projects involve a significant amount of detail beyond replacing the hydrant seen above ground including, and not limited to, valving of water during the repair, installation of mechanical restraints, tapping of water mains, traffic control and restoration of pavement, curb and gutters or sidewalks," the statement reads.

The city did not say how long these bids usually take or respond to additional follow-up questions.

Cross said she believes taking years to repair or replace a broken fire hydrant shows the city does not prioritize working fire hydrants as a public safety need.

"The city should take care of its own, and I feel like that fire hydrant is on the top of the list," Cross said

Portsmouth fire trucks carry about 750 gallons of water on each truck, and fire hoses are about 1000 feet long -- allowing firefighters to reach multiple hydrants if one is out of service.

Portsmouth Fire, Rescue and Emergency Services Battalion Chief Justin Arnold said the firefighters always have a "backup for the backup" and members of the department test active fire hydrants annually.

However, the responsibility to fix broken hydrants falls under the purview of Public Utilities, not Portsmouth Fire, Rescue and Emergency Services.

Shannon said the list of 25 currently out-of-service fire hydrants is not safe enough for herself or her other neighbors in Portsmouth.

"What are we going to do, we have a major problem here," she said.