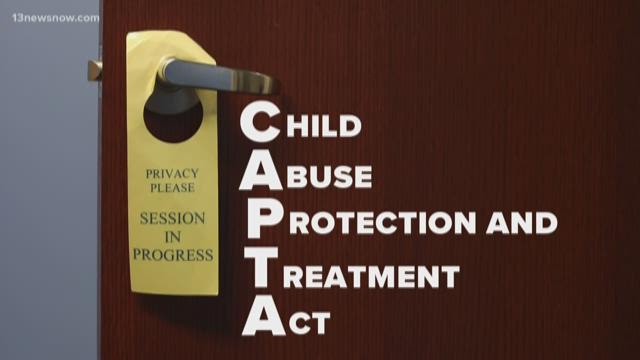 NORFOLK, Va. — The murder of Heaven Watkins, an 11-year-old girl from Norfolk, is prompting national legislation that could change the way caseworkers investigate child abuse cases.

A U.S. Congressional Committee passed legislation Wednesday that would strengthen the existing Child Abuse Prevention and Treatment Act (CAPTA) and create a national system in which states would be required to share its child abuse registries. It would also designate more funds for child abuse prevention and treatment nationwide.

"Even this additional money is not sufficient. In future years, we'll have to look for more funding," Scott said. "But this will go a long way to preventing child abuse, treating child abuse and having a network to make sure that information is there."

A 13 News Now Investigation into the death of Heaven Watkins helped spark this national legislation. Watkins died in Norfolk in May 2018 after being beaten to death.

Her mother, Latoya Smith, pleaded guilty to murder, and her mother's boyfriend Demont Harris is charged and awaiting trial.

Caseworkers in Minnesota had previously removed Heaven from her mother's care under suspicions of abuse, but courts decided she could be reunited with her mother after a year, and the family moved to Virginia.

Three months after another suspected case of child abuse in Norfolk, Heaven died. It's unclear if caseworkers in Virginia knew about the previous case in Minnesota.

Scott said currently there is no easy way to check the child abuse registries in other states, and he believes if the proposed system was in place last year, it could've saved Heaven Watkins.

"I believe Heaven would not have lost her life," Scott said.

Scott said the 'Stronger CAPTA' will break down barriers so children like Heaven Watkins won't slip through the cracks.