The Virginia Arts Festival and MacArthur Center are involved in a lawsuit surrounding the Michelangelo exhibit, which may be operating illegally after an art heist. 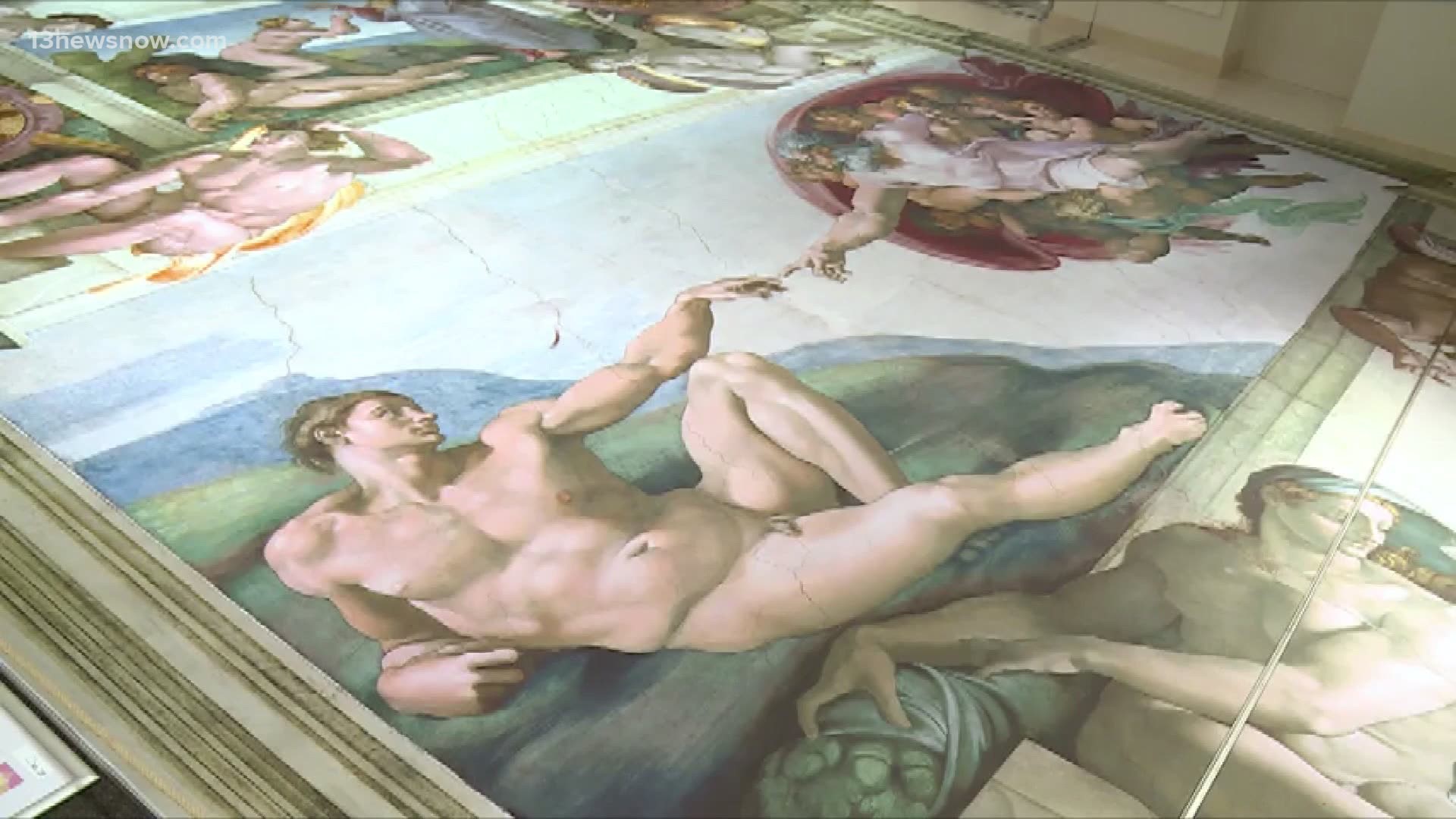 NORFOLK, Va. — UPDATE May 2021: The parties involved in a lawsuit over the Michelangelo exhibit that ran in Norfolk in August 2020 agreed to a settlement in the case.

How did the Virginia Arts Festival and Norfolk's MacArthur Center get wrapped up in litigation over an alleged international art heist, presenting a Michelangelo exhibit that may be operating illegally?

"The Michelangelo: A Different View" exhibit is currently on display through August 30 at the MacArthur Center.

But the creator who licensed the original exhibition of Michelangelo's Sistine Chapel frescoes - and a court order - says it shouldn't be.

The Virginia Arts Festival is currently sponsoring an exhibit that was ordered to be shut down by a Los Angeles County court judgment in 2018.

Documents provided to 13News Now show the Virginia Arts Festival was informed about the legal judgment before running the exhibit, and the non-profit went ahead with it anyway.

Biallas said he wanted to bring the paintings to the world, up close.

In 2015, "Michelangelo's Sistine Chapel: The Exhibition" debuted in Montreal. After its run, Biallas said two contracted employees stole the exhibit and images and moved them to Germany.

“These are stolen goods, not only physically but also intellectually," he said.

Biallas filed a lawsuit in Los Angeles County court. It included security photos, which Biallas said shows his former staff taking the prints, frames and software. The contract attached to the lawsuit shows the exhibit and images belonged to Biallas' company.

In 2018, a Los Angeles County court ordered the former employees, Thomas Ebel and Christina Marotzke, to pay more than $2.5 million in damages. The court order says Ebel and Marotzke must “return all equipment and images” and that they’re prohibited from promoting images and exhibits on the Sistine Chapel.

“It just can’t be that people just take goods and run off because it’s an international venture, go nuts on it," Biallas said. "You just can’t allow that."

The exhibition and lawsuit were tied up in international court, until now. The former employees, a new German company named Exhibition 4 You, agent Glenn Blackman and the Virginia Arts Festival agreed to bring the smaller, modified "Michelangelo: A Different View" exhibit to Norfolk.

“Let me tell you I was just stunned," Biallas said. "I don't know how people can even think about getting away with it."

Biallas' lawyer sent a letter to the Virginia Arts Festival in July, warning them about the judgment, lawsuit and theft of the Michelangelo exhibit.

“The last thing I wanted was for anyone in Virginia or Norfolk to get hurt because they didn’t know the story," Biallas said.

He said the Virginia Arts Festival didn’t respond, but they forwarded the letter to an agent, whose attorney responded.

The Virginia Arts Festival declined to comment multiple times and did not answer why it decided to proceed with the "Michelangelo: A Different View" exhibit after Biallas contacted them.

“I’m sorry they got involved, I tried to alert them early enough," he said.

Now, the Virginia Arts Festival and MacArthur Center are named defendants in a lawsuit seeking an injunction and damages.

The defense has requested to move the lawsuit from Norfolk Circuit Court to federal court. A defense attorney for Exhibition 4 You declined to comment. Blackman did not respond.

Biallas said the defendants voluntarily agreed to hold the exhibit in Norfolk through September 12 to make time for the injunction. He's looking for the return of the images and exhibition, and for the proceeds of the Norfolk run to be paid toward the $2.5 million California judgment.

Norfolk, of all places, the new center for a lawsuit over the photo displays of some of the most famous paintings in the world.

“For me to spend all this money on litigation, economically it’s crazy, but you have to because you cannot allow people to just steal your [intellectual property], it’s not the way this business works," Biallas said.