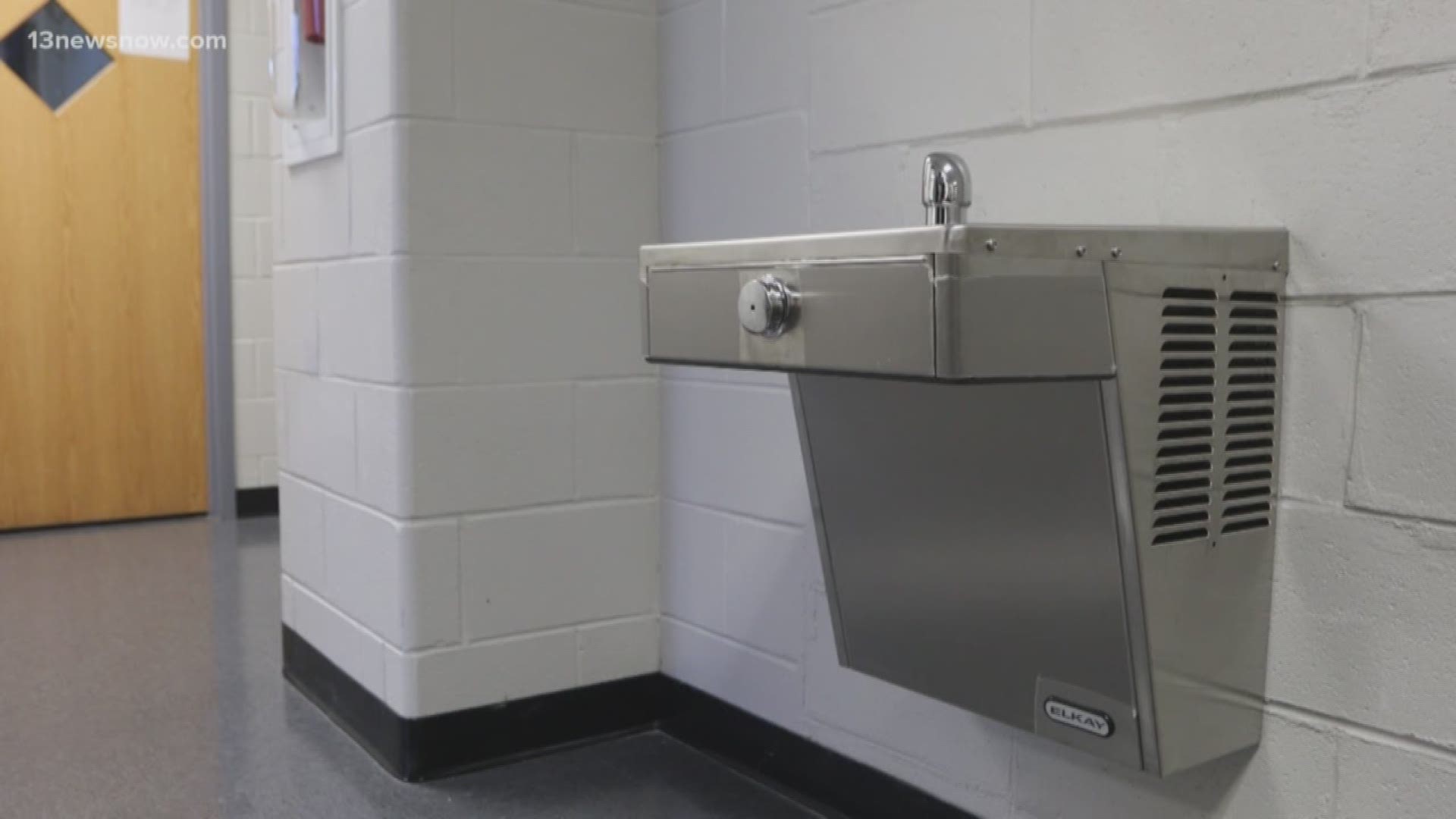 In response to multiple public information requests filed by the 13News Now Investigative Team, a total of 263 water sources at 83 schools failed level tests, and most divisions still haven't tested all of their schools.

"The children shouldn't be drinking that, they need to have filtered water or an alternative source," said Elin Betanzo, water quality expert at Safe Water Engineering.

Both school divisions said all water sources above that level have been fixed or removed.

At the time, public health officials said that health risks were minor.

"Relative to other potential sources of lead, this is very low in terms of risk," Demetria Lindsay, Virginia Beach Department of Public Health director said.

Betanzo said she disagrees, and that any amount of lead could be dangerous.

“Anything over zero parts per billion is a concern especially when we’re talking about school children who are our most vulnerable population to lead exposure," Betanzo said.

The testing, completed in the summer and fall of 2018, found 30 water sources with unacceptable lead levels - some as high as 30 times greater than 15 ppb.

Norfolk Public Schools responded to questions about its water testing with a plan for a comprehensive testing cycle that will test all water sources by June 2020.

Each school division, after sharing its water testing results, said it fixed or removed any water sources testing above 15 ppb. Although, Betanzo said simply flushing the system until water levels are lower than 15 ppb is not good enough.

“Especially when we’re talking about developing brains we don’t want to wait for the next generation to come along to fix the problem," she said. “You can put in those bottle filters and have filtered water for everybody and know they’re getting a safe source of water, instead of this continual sampling and finding lead."

There is no federal requirement for lead levels in school drinking water.

Hampton Roads schools are voluntarily choosing the EPA's 15 ppb actionable level as a maximum acceptable level, despite no mandate to do so.

A 2017 state law requires school divisions to test water sources, prioritize schools built before 1986, and remediate where appropriate, but it doesn't require anything else.

Each school division has committed to additional testing cycles, with most promising more comprehensive testing to be completed by the start of the next school year.

Specific school division information is below:

Out of the documents provided to 13News Now Investigative Reporter Evan Watson, 114 water sources at 14 schools tested above 15 ppb.

In response to follow-up questions, CPS spokeswoman Angie Smith said out of 1,665 water sources tested so far, CPS counts 146 sources that revealed lead levels over 15 ppb, "all of which have already received or have been scheduled for corrective actions as recommended by the EPA."

CPS plans to finish testing all schools built before 1986 by February 2020 and test remaining schools after that.

HCS provided proof of remediation and retesting that showed each of these water sources tested below 15 ppb during follow-up testing periods.

According to an HCS spokeswoman, all schools are projected to be tested by the beginning of the 2020-2021 school year.

NNPS provided testing data to 13News Now, showing 52 water sources at 19 schools tested for lead levels above 15 ppb. The testing was varied throughout 2018 and 2019. All schools built before 1986 have been tested.

In response to a question about retesting results, NNPS spokeswoman Michelle Price correctly said that the 2017 Virginia law does not specify an action level, nor a time limit for testing. The school division had initially set a level of 20 ppb as its maximum acceptable level.

Price said if results were higher than 20 ppb, the first action was to clean aerators and take the water source offline for retests. If in a retest the source still tested above 20 ppb, the fixtures at that location were changed. If it continued to test above 20 ppb, "the sink was removed from service and the lines were capped."

Out of a limited number of 72 water sources tested in September of 2017, two failed lead level tests. NPS has announced it will test all water sources by June 2020.

The division plans to test on an annual basis with the next round of testing happening in the spring and summer of 2020. More details can be found in a previous story.

A summer 2020 testing cycle is planned, as the last tests were conducted in October of 2017. Only 2 water sources tested above 15 ppb during that round of tests.

All schools built before 1986 are scheduled for testing by the end of December, with the remaining schools to be tested by May 2020. More details can be found here.