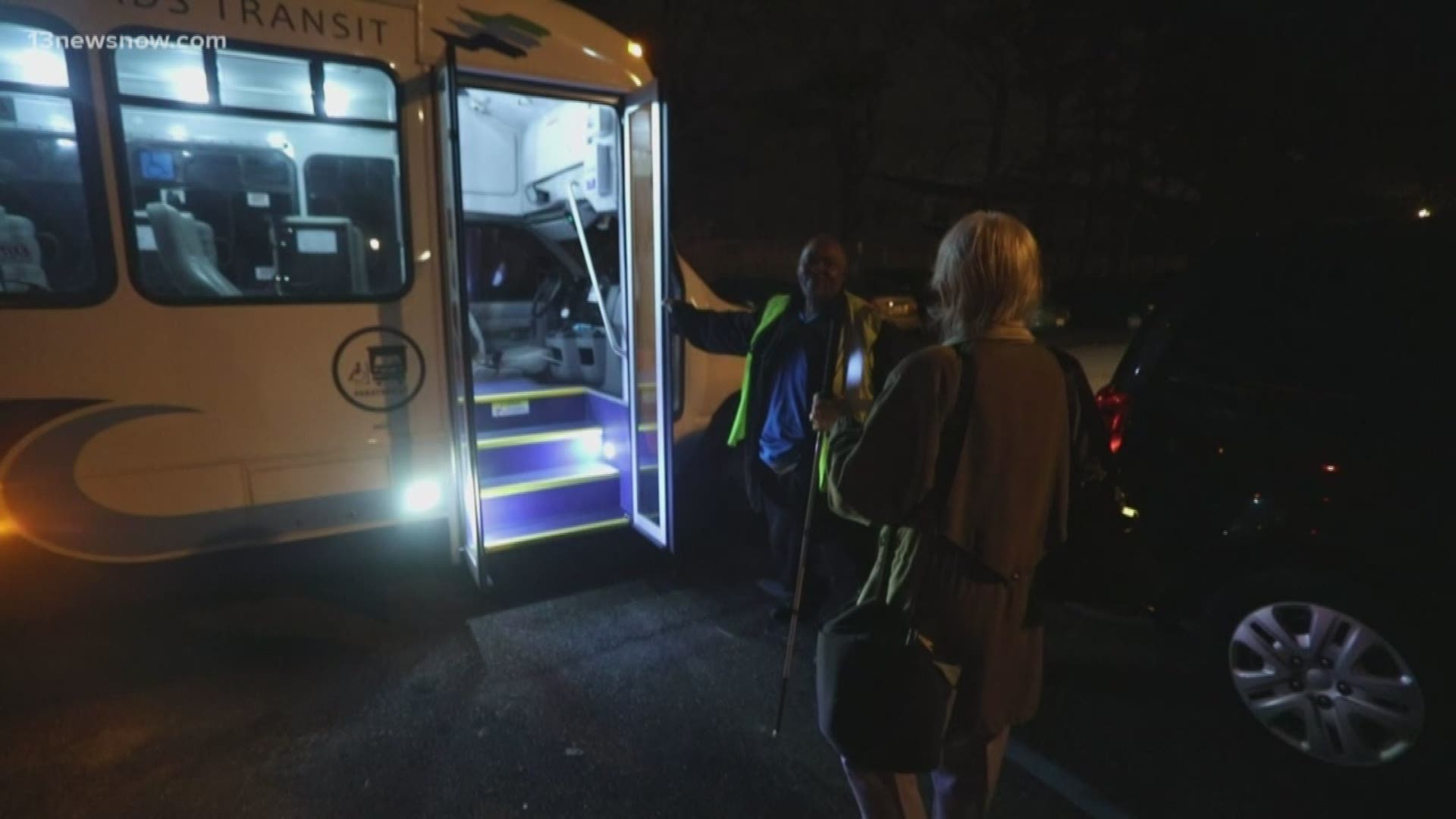 NEWPORT NEWS, Va. — Lynn Lesko wakes up before the sun rises. She checks her phone for a text from her bus driver; being legally blind, she relies on paratransit services to get her to her job.

On this morning, Lesko walks downstairs to see a familiar driver outside of her apartment. She said she feels relieved, because it hasn't been this easy so far this month.

Lesko said she's been late to work on four of the first eight workdays this month under the new management of paratransit service provider Via, all because bus drivers didn't arrive on time.

"The hardest part is getting up in the morning and saying to yourself, 'Am I going to get to work on time today?'" Lesko said.

She said she's lucky her boss is very understanding, but other riders are in challenging spots.

"I'm not in the situation like those who have dialysis or doctor's appointments," Lesko said. "It is critical that they get there."

"Part of our frustration with you is we had such high expectations here with technology that we feel a little letdown," one rider said.

HRT switched paratransit service providers this February after Via was awarded the contract to manage the service after a typical contract bid process.

Via is in charge of paratransit service operations, including drivers, vehicles, client scheduling, and route transportation.

HRT Chief Operating Officer Jim Price said some issues were to be expected during the transition. He mentioned that HRT experienced some problems during the last transition five years ago as well.

But, Price apologized to the paratransit ridership community and promised that every issue would be fixed.

"This is a particularly vulnerable community," Price said. "They need to be reassured that we are aware of those problems and we will actively address them and make them go away."

"People are obviously frustrated with some of the unacceptable service issues they're encountering," said Paul Atkinson, Paratransit Advisory Committee chairman.

At the meeting, Via representatives said the company was initially overwhelmed with a call volume of more than 2,000 calls per day at the start of February. The Via reps said more employees were assigned to answer calls and average wait time was decreased to about 2 minutes.

However, paratransit riders disagreed, saying actual wait times are still much longer, with some riders saying they've been on hold up to 40 minutes.

"That may be what your data says, I'm telling you the reality of the situation," said rider Linda Gurley. "It took over 30 minutes to make my reservations and that's consistent even today."

Price said HRT will work with Via until all issues are addressed.

"We’ll ask questions until we’re satisfied that they understand the nature of the problem and their solution makes sense, he said.

More than 2,000 paratransit riders take about 28,000 rides throughout Hampton Roads each month, according to HRT statistics.

Lesko said she's frustrated but hopeful that reliable scheduling and service will return.

“I urge them to look at these concerns and take them very seriously," Lesko said.