On Tuesday, Commonwealth's Attorney Colin Stolle filed a request for the courts to appoint a special prosecutor to investigate if any election or forgery laws were violated. 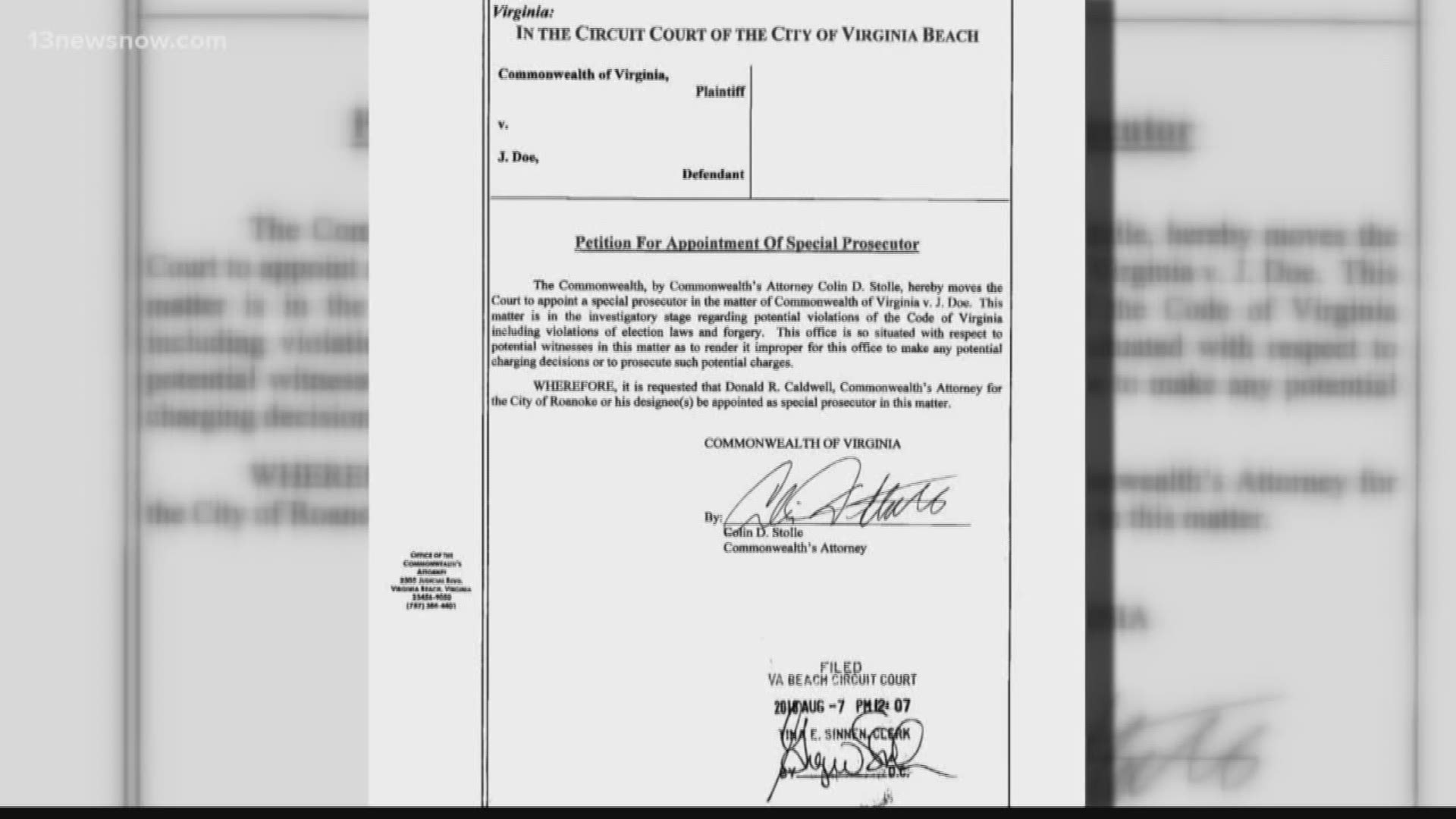 VIRGINIA BEACH, Va. (WVEC) — The Virginia Beach Commonwealth's Attorney has asked for and been granted a special prosecutor to investigate questionable signatures that appeared on a petition to get an independent congressional candidate on November's ballot.

13News Now examined the legitimacy of signatures on the petitions for Shaun Brown in the 2nd District Congressional race Monday.

The signatures in question had been collected by one of Rep. Scott Taylor's campaign staffers. More signatures gathered by Taylor's staff helped Brown to successfully get on November's ballot as an independent candidate.

Political analysts said the move is seen as an effort to split the Democratic vote in Virginia's 2nd District. Taylor is running against Democrat Elaine Luria, while Brown had been the district's democratic candidate in 2016.

We now know Taylor has fired his campaign consultant because of this incident.

“It was a shock,” Bet Cake reacted to seeing the petition.

There is shock, questions and now an investigation into signatures that are raising eyebrows on a "petition of qualified voters" to get Shaun Brown on the ballot.

Bet Cake told us Monday the signature near the name “Richard Cake” on the petition looks nothing like her dead husband's actual signature. Plus, Richard "Stuart” Cake passed away in April. His widow wants to know how then could he possibly have signed the document in June.

“I'm personally hurt and very frustrated that my beloved husband would have his name used that way,” Bet added.

Eileen Eady moved away from Virginia Beach in 2013, but somehow her name, signature and old address appeared on the petition, too.

“I thought that's impossible,” Eady exclaimed. “I can't have signed any petition on June 9th. I was living in Las Vegas and running for school board. So, I most definitely didn't live in Virginia Beach.”

Our investigation showed the signatures, gathered by one of Republican Incumbent Scott Taylor's staffers, were not signed by the actual people they claim to be.

Late Tuesday, he released new details. Taylor sent out a statement saying he "terminated the relationship" with a campaign manager several weeks ago, for separate issues, but "current knowledge underscores that decision."

We now know it has also prompted him to fire his campaign consultant.

"My campaign has a zero-tolerance policy for inappropriate activities," Taylor wrote.

The signature collector has to sign an affidavit swearing he or she witnessed each person actually sign the petition. Falsely signing that document is a felony. The prosecutor out of Roanoke will be the person to examine whether or not that happened, to determine if any charges are necessary and prosecute those potential charges.

We reached out to Donald Caldwell in Roanoke by phone and email to ask how this investigation will proceed. We haven't heard back from him just yet.

Here is the full statement from the Congressman in response to the investigation:

My campaign has a zero-tolerance policy for inappropriate activities. Recently we became aware of the inconsistencies in a voter petition process along with everyone else. Previously, our team terminated the relationship with our campaign manager for separate issues, however, current knowledge underscores that decision and prompted me to sever ties with my campaign consultant. This will not, at all, effect my ability to run our office in the efficient, effective, and impactful way we have been. While we cooperate fully, these irregularities have no bearing on Shaun Brown's right to be on the ballot. National Democrats are engaged in a systematic effort to disenfranchise 2nd District voters by marginalizing a qualified African-American candidate, for the second time, from being on the ballot.