A 13News Now investigation uncovers the latest data on these spam calls. We take the issue to state leaders to find out what they're working on to protect citizens. 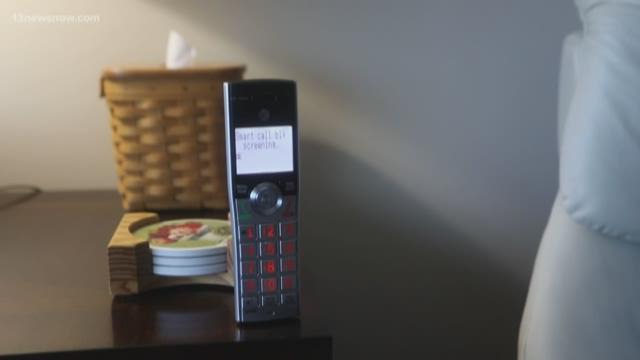 Mark Herring told 13News Now as attorney general, one of his top responsibilities is protecting consumers, which is his motivation for taking on this issue.

In Martha Cain's apartment, there are two personalities she speaks to regularly. Her adorable rescue dog, Scotty, and her "assistant," Alexa. Martha uses Alexa to turn off and on the lights in her living room, among other tasks.

This 75-year-old knows her tech. She turned to technology to deal with robocalls.

“I was tired of the nuisance,” Martha told us. “It's an aggravation to have it ringing all the time and find out it's nobody you want to talk to.”

So Martha bought a phone-screening system for her number. It comes with a database of known robocallers and blocks those calls. Only when you identify yourself, will the system allow your call to go through.

“If I didn't have this phone, I would be sitting in the chair... phone would ring, [and] you gotta lean over, pick up the phone, find out you don't want to answer it, put it back down, get back comfortable, whatever I was doing,” she described.

Martha is worried about her fellow seniors who might fall victim to robocall scams.

“Yes, I am IT savvy, so I avoid those kinds of things, but there are a lot of people that don't,” she said.

The latest data from the app "Robokiller" shows phone numbers in the 757 average about 20 robocalls a month per person. That's just above the national average.

According to the Federal Trade Commission, Virginia ranked seventh last year for the number of complaints made to the Do Not Call Registry.

FTC data shows people in Washington, DC made 17,135 complaints to the Do Not Call Registry last year, which is almost 50 complaints every day.

"Robokiller" also reported phone numbers in the 202 area code averaged about 26 robocalls a month per person. That's almost 40 percent above the national average.

So 13News Now went to Richmond to talk to the Commonwealth's top lawyer and find out exactly what officials are doing about this issue.

“We all get robocalls,” Mark Herring said. “I'm the Attorney General, even I get them.”

We asked Herring why people are still getting these calls if the country has the Do Not Call List and the robocall rule.

“With the technology changes that have been developed, it's gotten easy to get around those rules and those protocols and so these calls are still coming in,” Herring responded.

He joined a group of about 40 state attorneys general. They're trying to find some other solutions to this problem because enforcement alone doesn't cut it.

“These calls often work their way through a maze of local providers, so even if we're able to find out where the source is, where they're originating from, not only are they often out of state, but they're often overseas,” Herring explained.

Now, the nationwide coalition is holding meetings with several of the major telecom companies to discuss what technology is feasible to stop these calls and how those companies can get to these solutions faster.

One of those systems is called "STIR-SHAKEN." It's an acronym, and without getting into the weeds, industry leaders hope it will offer the same kind of relief spam filters and junk notifications do for your email. It's been in the works for a while but hasn't been fully implemented just yet.

“We also know that that technology alone is not enough, that they're going to still be coming in,” Herring added. “So we're working with the telecom companies to identify what other technologies might be out there and it would be a good opportunity for an enterprising telecom company to come up with the solution to fix it.”

At her apartment with Scotty and Alexa, Martha is still skeptical about what's to come.

“There's always somebody that's one step ahead of them,” Martha reacted. “They figure out what's happening, and they start all over.”

In addition to new technology, lawmakers are also looking to enact legislation to stop robocallers. Federal representatives are also working on legislation to give the feds more power in the fight against robocalls.

We also wanted to sit down with officials from the Federal Communications Commission and the Federal Trade Commission to get more details about what those agencies are doing, but the government shutdown canceled our interview.