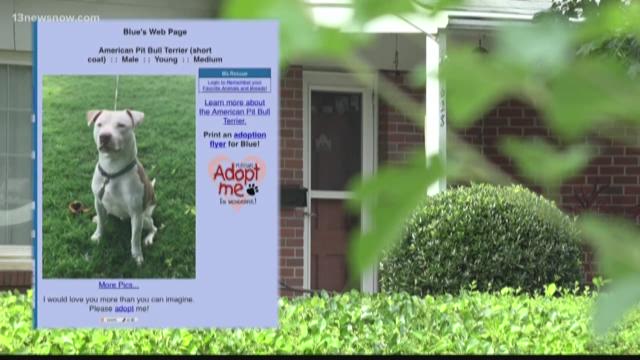 RICHMOND, Va. (WVEC) -- A bill, created after a 90-year-old Virginia Beach woman was mauled to death, is on its way to the Governor’s desk.

Republican Senator Bill DeSteph drafted a bill that would require adoption agencies to ask if an animal has a bite history and disclose its findings to future adopters.

“You should ask whether a dog has a bite history and if it does you should be told it does,” said DeSteph. “So I think truly it’s just a common-sense measure.”

“It’s just horrible,” said Blank. “She’s got to walk through that room. She’s in the house where her mother got killed.”

DeSteph’s bill would make it a class three misdemeanor if an adoption agency fails to disclose an animal’s bite history to a future adopter. The result of the charges, a $500 fine. Blank said he thinks the punishment isn’t enough.

“While I think this is a step in the right direction, I do not think this statute is strong enough and I don’t think it creates enough protection for the citizens of Virginia,” said Blank.

However, Virginia Beach Animal Control Officer Rebecca Franklin said having some sort of legal protection for consumers is better than nothing.

“I think it is definitely a step in the right direction,” said Franklin. “I’m not going to say whether or not it’s hard enough or not.”

If Governor Northam signs the bill into law, it will go into effect July 1.