Drivers will have to detour as the bridge undergoes repairs. 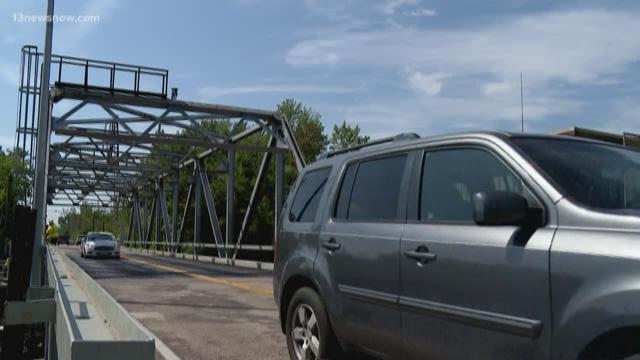 CHESAPEAKE, Va. — It's a project that has loomed over drivers in Chesapeake.

Beginning Saturday, the Centerville Turnpike Bridge will close for six months to undergo repairs. The closure will force roughly 16,000 vehicles that cross it every day to detour.

It's a necessary closure that residents like Stacey Weidetz dread.

“I think it's going to be a traffic nightmare,” said Weidetz. “It’s gonna be rough for six months and it’s gonna make all the feeder roads around here really busy, but hopefully at least it’ll maybe get done early.”

On Friday, crews removed parts of the bridge as they prepared for Saturday’s shut-down.

City leaders said without the repairs, the 64-year-old bridge may not be able to open and close properly.

Business owners sitting beside the bridge are anticipating a drop in sales due to the closure.

Karen Bryan, the owner of Vintage Vibe on Centerville Turnpike Road said she relies on traffic flow from the bridge to bring in many of her customers.

Bryan said she’s worried about the bridge being closed for an extended period.

“I hope we survive it,” said Bryan. “It’s coming up on holiday season, that is a big problem cause everybody’s gonna be out shopping and that's a lot of traffic to lose.”

Bryan said the uncertainty surrounding the closure's impact on business has halted her plans to expand the shop into space next door.

“We definitely don't know what will happen, we just hope that once everybody gets used to the idea that it's closed and that they have to detour, that'll keep bringing the traffic in,” said Bryan.

Public works crews will temporarily suspend other non-emergency road projects in busy parts of the city to relieve traffic during the six-month closure.

The project will improve the bridge and make it safer for years to come.

For information about the closure and detour routes, visit the city's website.