Paul Mohlman noticed an old pipe removed from his floor. He looked through the hole and was shocked to come eye-to-eye with an intruder in the crawl space. 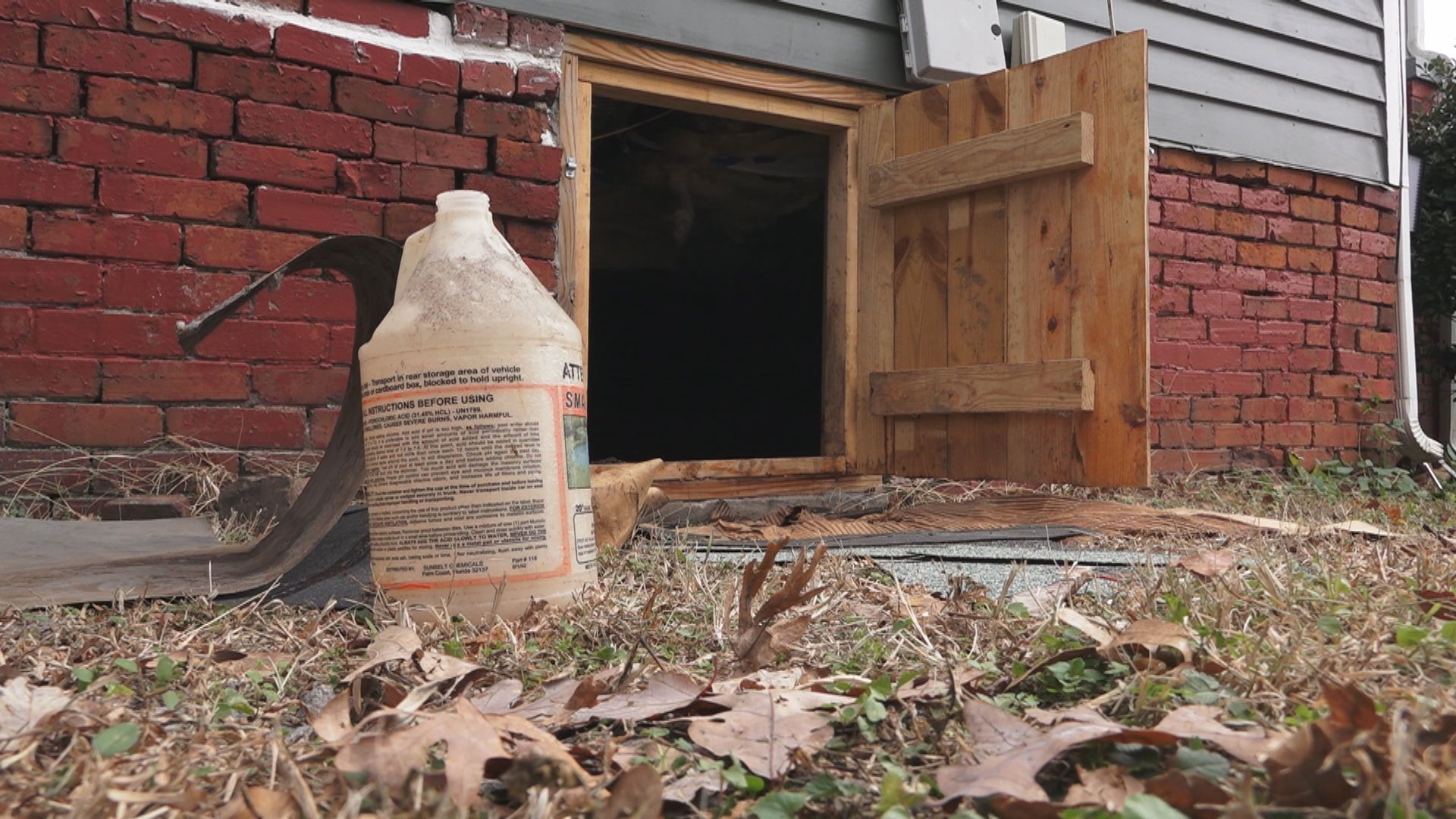 KNOXVILLE, Tenn. — A Knoxville man called 911 Monday after finding quite a surprise under his house:  a couple of half-naked men apparently trying to make drugs.

Paul Mohlman was watching television at 10:00 a.m. Monday when he heard a loud thud in one of the bedrooms.

"I thought something fell.  I walked in and there's an old radiator connection and pipe on the floor. How on earth did it get there? There's a hole in the floor where the radiator pipe used to be, and I can see there's light coming through the hole from the crawl space.  I look in the hole and there is an eyeball staring back at me. A green eyeball," said Mohlman.

Mohlman said when he asked who the man was, the answer was incoherent.

"At first, I thought he might be someone the landlord sent for maintenance. Then I could see through the hole he had no shirt on, no shoes, was really dirty, and clearly a person on some kind of drug," said Mohlman.

Credit: WBIR
Paul Mohlman shows the pipe that was pushed up and out of a hole in the floor where he spotted intruders in his crawl space.

Mohlman called 911 and warned the dispatcher his story would sound odd.

"I said, 'This is going to be the strangest call you've had all day, I guarantee it. There's a half-naked man under my house and I'm not sure what he's doing.' Knoxville Police were here in seven minutes," said Mohlman.

Mohlman warned the intruder he was armed with a rifle and he did not want him beneath the crawl space.

"I did not go around to the side of the house because I did not know if this person was armed. I had my gun for my protection, not because I wanted to confront this guy and shoot somebody," said Mohlman.

KPD searched the crawl space and found a 24-year-old black male, but did not find the white male with green eyes Mohlman saw through the floor.

Credit: WBIR
Hole in the floor where Paul Mohlman came eye-to-eye with a half-dressed intruder in his crawl space.

"The guy they caught did not have any pants on. The other guy did not have a shirt on. There were two bottles of muriatic acid outside the door to the crawl space and they did not come from this house. When I saw the bottle of muriatic acid and realized we were maybe dealing with someone trying to make drugs or something," said Mohlman.

The side-yard also had clothing and the garden hose was turned on.

"He tore down insulation, he messed around with electrical boxes, and my HVAC unit stopped working. I have no idea what their goal was, whether they were trying to steal pipes or get some other kind of chemical. Honestly, I'm not sure they knew what they were trying to do, either," said Mohlman.

Mohlman said he began to question his memory of a green eye when only one person was found beneath the house.  An employee at a nearby bar recorded surveillance footage of the man who was caught with a second person a few hours before the crawl space break-in.

Credit: WBIR
Officers catch an intruder in the crawl space of a North Knoxville home. Photo by the home's resident, Paul Mohlman.

"And sure enough, [on the video] there's the guy who they caught under my house. But there's also this other guy who I immediately realize is the guy I saw in the hole," said Mohlman.

Police returned to double-check beneath the house. The man in the video was not found and some of the clothing from the side-yard was gone.

Mohlman did not press charges against the man who was caught beneath his house. Knoxville Police said the man was behaving erratically and was taken to the hospital for evaluation.

The story is bizarre, but Mohlman shares it for more than entertainment. He wants people to secure areas they may not have previously considered.

Credit: WBIR
Bottle of muriatic acid found in the yard of a North Knoxville man who found intruders in his crawl space.

"There are crawl spaces just like mine at almost every house in this neighborhood and none of them are locked. I bought brand new padlocks to install on the crawl space doors. I learned the hard way. So, hopefully nobody will have to go through what I went through. Looking down through that hole and seeing an eyeball flash back at me - a green eye - I'll never forget it. It's the stuff of horror movies, honestly," laughed Mohlman.

KPD spokesperson Scott Erland said the second person has not been located. Erland said he is not aware of other crawl space break-ins that would make this a recurring or common problem for residents in Knoxville.