There's no word on what caused a fire to break out at the Valley Proteins Plant in Emporia. 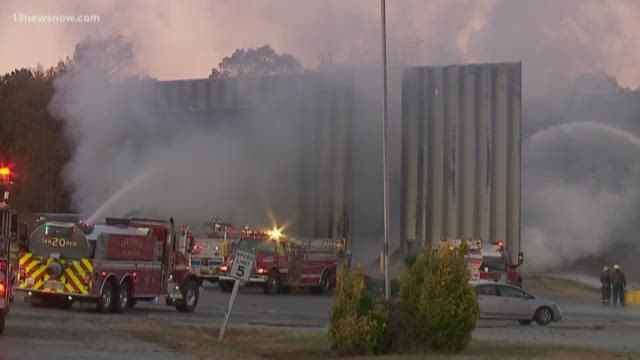 EMPORIA, Va. — Investigators are working to learn what started a fire at a protein plant in Emporia early Monday morning.

According to Dreweryville Volunteer Fire Department Chief Jonathan Whitbey, crews were called to the Valley Proteins Plant at 3:50 a.m.

"Living in a rural community, it’s one of the worst ones we’ve seen in a couple of years," Whitbey said.

It took several hours for firefighters to put out the flames, but they were able to fully contain the fire by 6 a.m. They worked on extinguishing hot spots afterward.

Firefighters from the about 15 surrounding areas including Courtland, Boykins, Severn, Waverly, Wakefield, and Drewryville were at the scene.

As crews worked to contain the flames, they found that some of the plant's equipment and some of their products were damaged. There's no fire hydrant near the facility, so firefighters were forced to shuttle water back and forth.

"Our nearest water source was actually in the City of Emporia, which is about 12 miles away," said Whitbey.  He told 13News Now each tanker carried about 1,500 to 3,000 gallons of water. 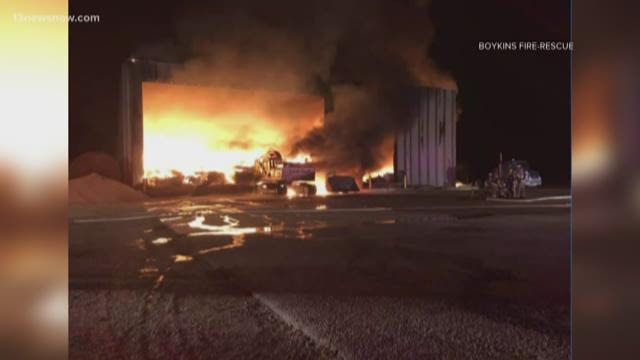 There's no word yet on what caused the fire and no one was injured. Chief Whitbey said more than five million tons of grease and chips are mixed inside the building and hazmat teams were called to the scene to investigate.

"It was coming out of the doors and everything. We had the roof collapse, the walls collapsed, everything of that nature," he said.

Valley Proteins President J.J. Smith estimates it’s just under a million-dollar loss. He said the manufacturing facility closed six years ago and was being used as temporary storage.

Crews planned to tear it down in the spring before the fire happened.