All You Can Eat Week: Jack Brown's 'Fried Oreo Challenge'

As part of All You Can Eat Week on 13News Now Daybreak we checked out famous food challenges in Hampton Roads. 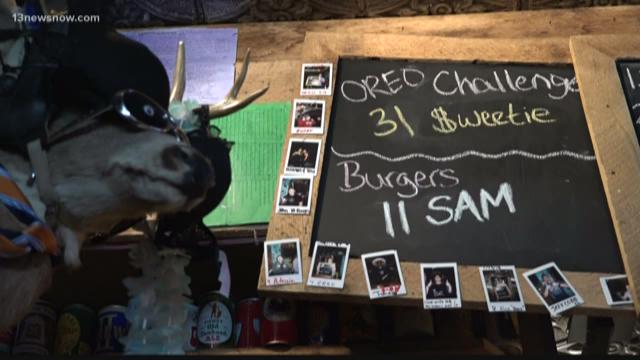 “Burgers and beer is what we do,” said Jamie Tew, one of the managers.

But what most may not know, is that Jack Brown’s has a challenge that’s perfect for any sweet tooth: the Oreo Challenge.

“The Oreo Challenge consists of deep-fried Oreos that have been battered in pancake batter and peanut oil, and dusted in powdered sugar,” Tew said. “Right now the total to beat is 31, so you’ll have to go ahead and eat 32 to beat the record.”

Who in the world would even attempt to break a record like that? Why 13News Now producers Ryan and Sarah thought they would give it a try.

“I’m thinking 32, I’m going for it,” said Ryan, right before he and Sarah received their baskets of 10 cookies.

SEE ALSO: All you can eat pizza challenge at Brothers Pizza

The challenge has no time limit and some rules that prohibit you from leaving the restaurant or going to the bathroom. In other words, you’ve got to keep all those Oreos down for glorious bragging rights, your choice of a Jack Brown’s shirt or hat and your name on the chalkboard inside the bar.

It's a prize that Ryan and Sarah deem worthy of the pain as they got started.

“And we all know how that goes,” he responded, “the hare wins triumphantly and everyone loves him…I never finished that book.”

The sarcastic humor that once dominated the table eventually gave way to the realization that no mere mortal should try to eat so many deep-fried Oreos.

“They start to feel it in their tummies,” Tew chuckled, peeking over the bar. “If they’ve been here for that long and they’re still chewing, I think they’re doing pretty good,” she continued.

“The funny thing is, we’re running a 5k tomorrow,” said Sarah, turning to Ryan. He wiped his mouth and quickly justified, “life is all about balance.”

Shortly, the chewing stopped and both faces twisted into blank stares. The final tally, not quite enough for that coveted shirt or hat…Ryan finished with 18, Sarah with nine... still a valiant effort.

Jack Brown’s Norfolk location is at 131 Granby Street. Their menu and more can be found at www.jackbrownsjoint.com.