Eight others died in the helicopter crash, including Bryant's daughter Gianna. 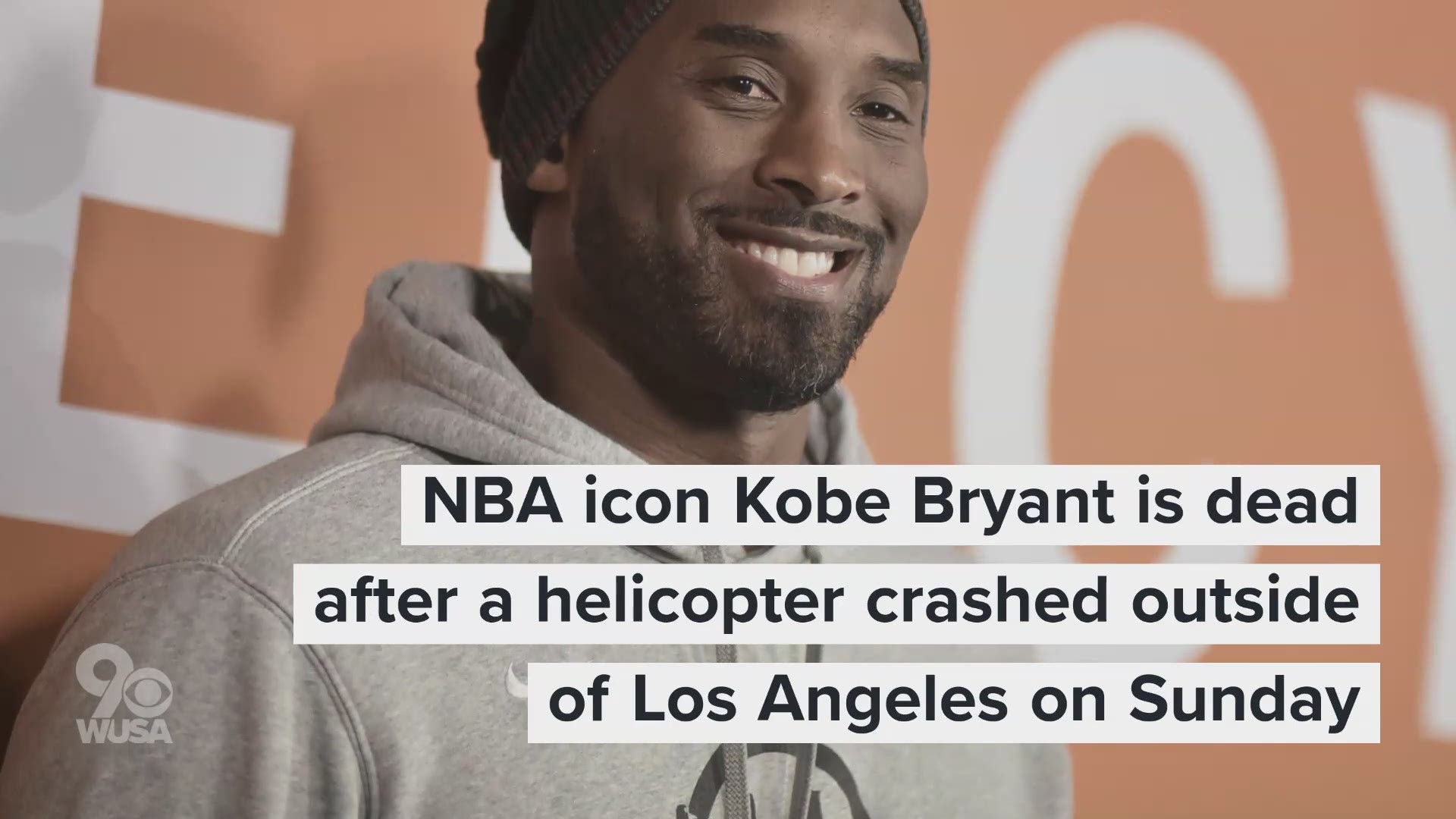 WASHINGTON — NBA star Kobe Bryant tragically died during a helicopter crash in Calabasas, California Sunday afternoon. He was 41 years old, and the accident happened only years since his retirement from the league in 2016 after 20 seasons.

His daughter Gianna also died in the helicopter, along with seven others.

The nation is now mourning the sudden passing of Bryant. From celebrities to professional athletes, thousands are grieving the NBA legend's death. Bryant was a hero to people around the world. A little closer to home, many are remembering his legacy right here in the District.

The National Black United Front is holding a vigil at the African American Civil War Memorial for the NBA star Friday at 5 p.m. at the memorial in D.C.

Credit: AP
FILE - At left, in a Jan. 25, 2013, file photo, Los Angeles Lakers guard Kobe Bryant goes up for a dunk during the first half of an NBA basketball game against the Utah Jazz, in Los Angeles. At right, in a July 12, 1996, file photo, Kobe Bryant, 17, jokes with the media as he holds his Los Angeles Lakers jersey during a news conference in Inglewood, Calif. Two numbers go into the Staples Center rafters when the Los Angeles Lakers retire the jerseys of Kobe Bryant, the five-time NBA champion and top scorer in franchise history. The Lakers will hang No. 8 and No. 24, representing both halves of Bryant's storied 20-year career. (AP Photo/File)

"Join us for a special prayer vigil of remembrance for the life and legend of Kobe Bryant," the release said. "Kobe Bryant has touched so many people in so many ways and it is only right that we take a moment to honor him and his family. We ask that you join the DMV Community in honoring our fallen brother and his family."

Those who want to attend should RSVP. The memorial is asking everyone to bring a white candle.

The memorial called Bryant "more than an athlete," which is true in many regards. Bryant and his family were activists. The Kobe and Vanessa Bryant Foundation contributed more than a million dollars to the National Museum of African American History and Culture.

Bryant is honored in the museum among other legacies. A signed No. 8 Lakers jersey has a home in the sports exhibit along with the one he wore as No. 24 in the 2008 NBA Finals.

His community extended beyond Los Angeles as seen in a 2010 photo with President Barack Obama as they assembled care packages for wounded warriors.

His advocacy and giving foundation has touched lives across the nation. Many are celebrating his life with the hopes they'll do him the justice he did to communities around the world.