Don't be surprised if you see a lot of smart and innovative kids walking around the D.C. area this weekend. The second annual National Invention Convention and Entrepreneurship Expo is kicking off this weekend, meaning 300 kids will be in town to show off their new inventions. 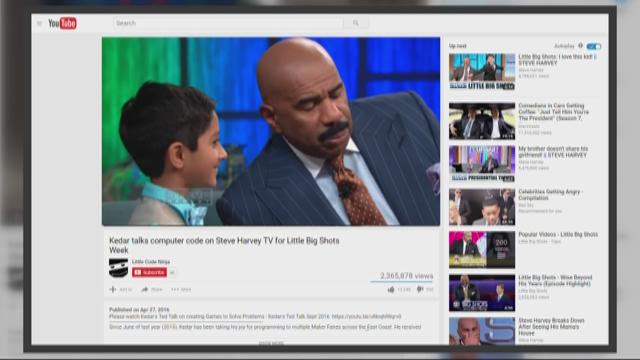 Don't be surprised if you see a lot of smart and innovative kids walking around the D.C. area this weekend. The second annual National Invention Convention and Entrepreneurship Expo is kicking off this weekend, meaning 300 kids will be in town to show off their new inventions.

"This is like the story of Goldilocks," said Kedar Narayan. "But we call it Code-i-locks. Because we're using code."

Narayan was joining us at the U.S. Patent and Trademark Office in Alexandria, the site of the convention. In front of him was his invention, which can be difficult to explain.

"I guess I'm the only one that's stuck on stupid right now," joked Steve Harvey, when Kedar was on the show last year. "I'm feeling real inadequate right now."

Essentially Kedar's invention can be boiled down to the training wheels of coding. Kids can use what looks like a board game to map out an adventure. Using these logic skills, it can better prepare prospective coders to begin "block coding," an online tool to build video games.

"This is kinda like code functions," he said. "Only without actually using electronics."

Also shining in the spotlight this week is a trio of girls from Tennessee. Kameryn Galland, Erin Higgins and Skye Roberts were volunteering with kids with disabilities, when they realized a problem.

"We wanted to make something that could help them have more fun on the swing," said Higgins.

That's why they invented what's called the "easy swing suit," which helps strap kids into the swing, so they don't fall. The girls showed WUSA9 a video of those kids playing in the swing, and couldn't help but get emotional.

At last year's convention, the winner was 14-year-old Lucca Riccio. He thought of his invention when he was visiting his sick grandmother at the hospital. She was wearing an oxygen mask, which made it difficult for her to communicate with loved ones in her final moments.

"It was on the car ride home," he said. "And I was just thinking... why don't they just put a microphone in front of her mask."

Now, that idea has become a reality. Riccio has built a contraption that places a noise-canceling microphone into the gas mask adapter. That way you can hear the patient, even when the oxygen is pumping.

As for the newcomers like Kedar, they believe the event is all about one thing.