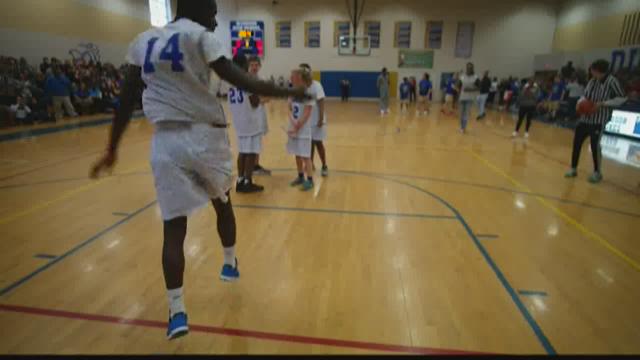 The band was playing, there wasn’t an empty seat in the bleachers and she was getting ready to walk onto the court for a basketball game against Smithfield High School.

It was an opportunity she doesn't normally get.

Like every athlete on the court Thursday morning, the freshman has an intellectual disability.

“They are just amazing,” said Ellsworth, referring to the students who cheered her on. “No one could ask for more.”

“They should have the same opportunities to play in front of their peers.”

There are six different teams from surrounding schools that make up the Tri-Rivers Basketball League.

Each team is made up of students with disabilities who now have a chance to play competitive sports in front of their peers.

“They get that chance,” said Windsor High School Principal Danny Soderholm. “They get to be basketball stars.”

But just like any other basketball game the fans came to see a good show.

With 20 seconds left in the game, Windsor senior Grant Fabits sunk his team’s only three-point shot of the game.

“Acceptance and inclusion is a big part of our culture,” said Soderholm. “And those disabilities don’t get in the way of that.”

Two of the teams in the league include students from the Southeastern Cooperative Educational Program, and there is also a team in the league from private school Plan Bee Academy.