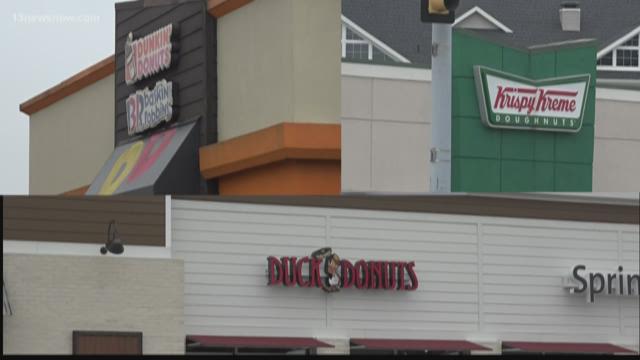 CHESAPEAKE Va. (WVEC) -- There are three donut shops are just minutes away from each other on North Battlefield Boulevard in Chesapeake.

Dunkin Donuts, Krispy Kreme, and the newest one Duck Donuts.

Christopher Torio is the franchise owner of the Chesapeake Duck Donuts. On opening day, the line was out the door.

“With the volume here, I believe this is one of the busiest corridors in all of Hampton Roads,” said Torio.

A consumer report said American’s ate 195 million donuts, in 2017, but customers said it’s stiff competition for their money which makes Battlefield Boulevard, the new battleground for a donut shop war.

“It’s a little war, but it’s no different from Home Depot and Lowe's,” Torio said. “It’s options, and people have more options.”

I reached out to Krispy Kreme and Dunkin’ Donuts, with no luck of getting someone on camera.

So, 13News Now hit the street to talk to people and see who they think is winning the donut war.

“They were amazing so we were super excited when this one opened up,” said Claire Stancy.

Scott Mccain said he’s such a big fan of Krispy Kreme, he even keeps a box of them in his truck.

He thinks most people got to Dunkin for the Coffee.

The latest contender Duck Donuts believes their fresh pressed donuts are best on the block.

In the war of donuts, Duck Donuts said they’ve got what it takes to win.