UTPD K-9s protect all Vols on game day, beyond

While the Vols practice for game days, these K-9s train to make sure security is a win every Saturday. 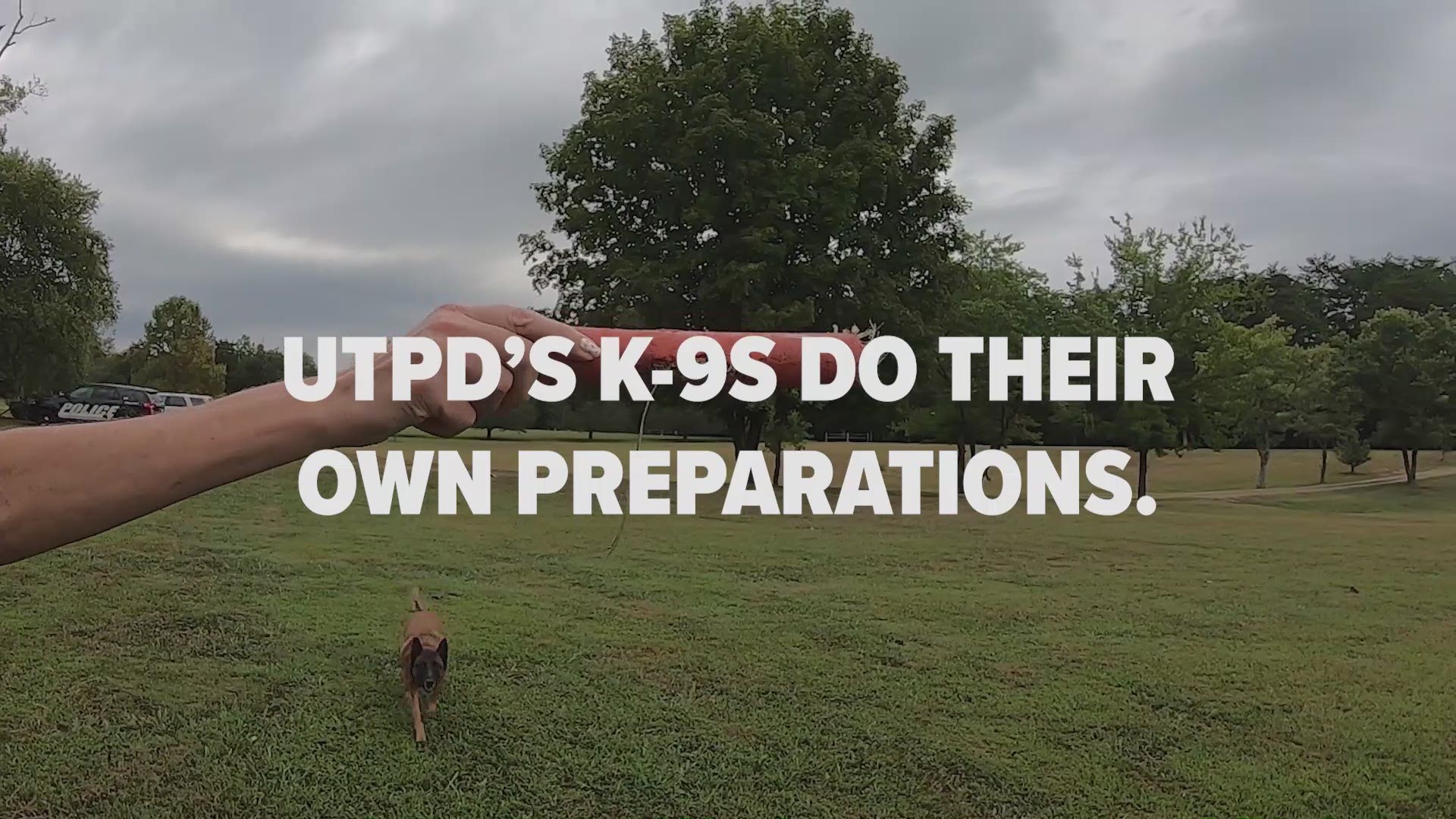 KNOXVILLE, Tenn — While the Vols practice to hit the gridiron and fans get ready to crowd Neyland each Saturday, the University of Tennessee Police Department K-9s are doing some preparation of their own.

UTPD has four K-9s, three are dedicated to explosives detection and the fourth, a German shepherd named Bruno works drug detection and apprehension with his human Officer Jeffrey Quirin.

The explosives detection team is made up of two Belgian Malinoises named Tica and Athena with their owner/handlers Corporal Mary Cameron and Corporal John Platt and a brand new black Labrador named Kale and his human Officer Kaylyn May.

“They are an absolute necessity for the university. They add one more layer of security and safety for not only students but our staff, our faculty, our visitors on campus,” Cameron said.

From basic obedience and agility drills to sniffing out unwanted substances in a variety of locations, these four-legged sniffers train regularly to keep their noses sharp for game day.

Cameron said they are required to do 16 hours of training per month, but usually are able to do more.

Every week the unit meets up to train together.

They start with basic obedience and then move on to detection scenarios, during which the officers will hide different substances anywhere from in bags on the ground, to up in trees, to inside buildings and vehicles.

The K-9s then have to check the area and sniff out the substances sometimes with several hidden in the same area. Once they find the scent’s location, they sit down before being rewarded with their favorite toy.

For several days leading up to games, the K-9 unit also goes through extensive security procedures to make sure Vol fans are safe and can have fun.

They partner with Knox County to do multiple thorough sweeps of Neyland and other areas on campus.

“We are trying to check every possible perimeter, every exterior area we can think of, anywhere someone might potentially try to cause damage,” Cameron said.

On game day, they arrive hours before the kickoff to be an extra layer of safety and security for all Vols, whether they are going to be on the field, in the stands or at a tailgate.

RELATED: I experienced my first UT game day and 'Rocky Top' is now permanently stuck in my head

Tica, Athena, Kale and Bruno, are integral to UTPD’s game day safety plan, but their jobs take them well beyond Neyland Stadium.

“We have a dog available every single day and we can check any building if there’s something going on or if a student feels that something is a little out of the ordinary, we’re going to come by and we’re going to check it,” Cameron said. “We’re going to make sure they’re taken care of. It’s just one more extra layer that we can make sure that everyone goes home safe.”

Between the day-to-day responsibilities and working as security during special events, these officers, both four-legged and two-legged, are fixtures on campus, but Cameron said the connection doesn’t stop at the office.

“I have people on campus ask me, their first thing is not ‘how am I doing?’ but ‘where is your dog?’” Cameron said. “Part of the bond with the dogs is the fact that they are with us 24/7. They go home with us.”

Though the officers make themselves available often, Cameron wants people to remember to always ask before interacting with any dog, whether they are a K-9 or not.

However, if they are in uniform, they are working and should be left alone to ensure all Vols on campus are safe.

RELATED: Meet Kato, the search and rescue K-9 of the Smokies

RELATED: Sevierville police adopted this shelter dog and now we can all rest easier tonight