The videos show a struggle to get Floyd into a squad car, then Chauvin's knee on Floyd's neck for more than nine minutes. 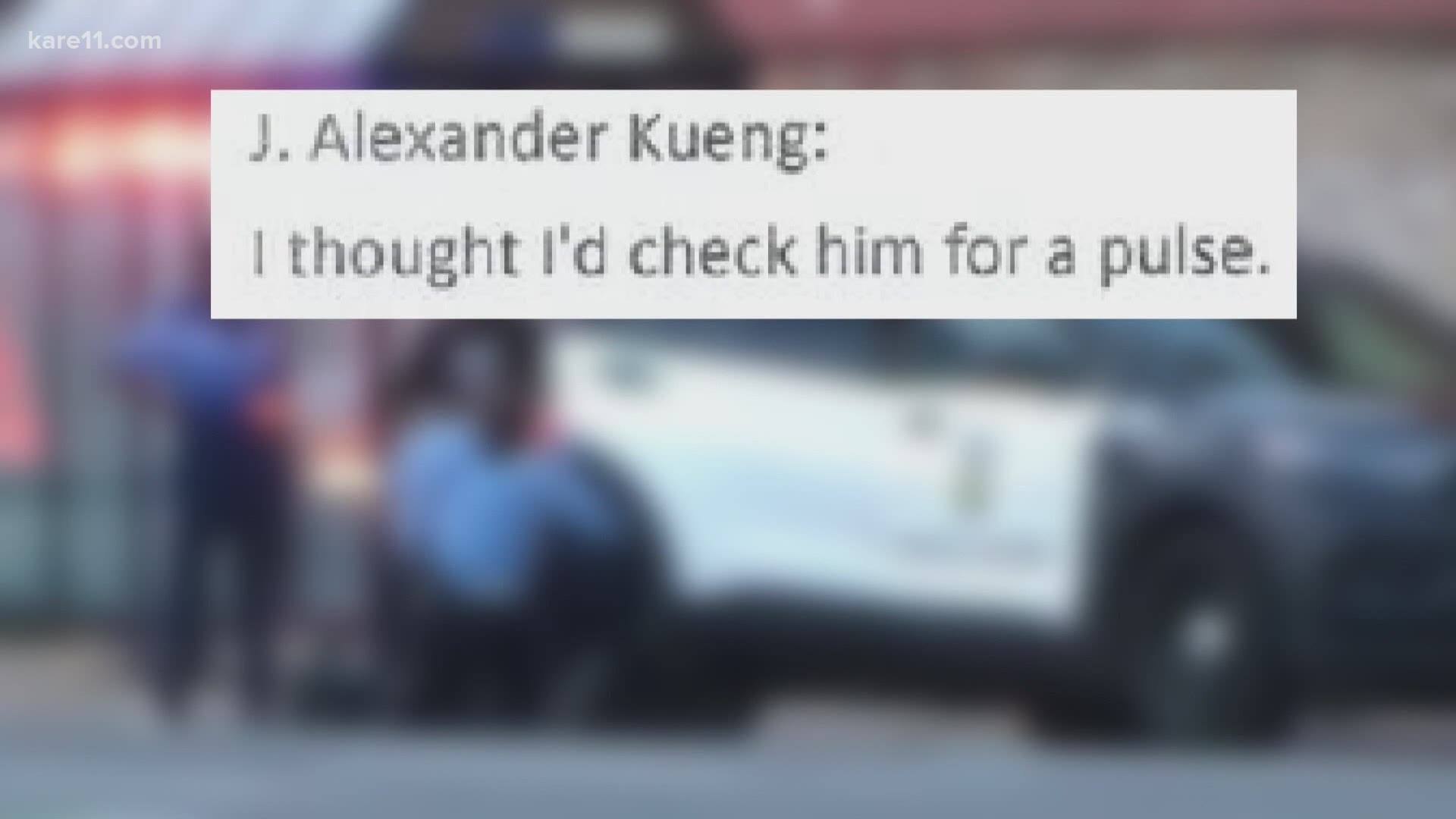 MINNEAPOLIS — Minneapolis police body camera video is offering additional insights into the arrest and death of George Floyd in late May, and shows a longer period of time in which now-former officer Derek Chauvin had his knee on Floyd's neck.

While the body camera video is not available to the public, the court is allowing members of the media to view footage from body cameras worn by officers Kueng and Lane. KARE 11's Lou Raguse was one of the reporters approved to view the videos on Wednesday.

This morning I watched the full body camera videos for former officers Thomas Lane and J Alexander Kueng. I will try to update in this thread what the body cameras show that you are unable to see in the Facebook video and other available surveillance videos

The videos show Lane and Kueng approach George Floyd's car parked near Cup Foods at 38th and Chicago on May 25. Lane is seen pulling out a flashlight and tapping on the window, visibly startling Floyd. Lane can be heard on the video ordering Floyd to show his hands. The body camera video then shows Lane pulling out his gun and pointing it at Floyd for 41 seconds.

Floyd is heard on the video telling the officers, "I got shot the same way Mr. Officer, before," a statement also shown in a transcript of the body camera video released by the court last week.

Body camera footage shows Floyd was handcuffed within two minutes of the officers confronting him in his car. The officers then move Floyd to the side of the building and order him to sit down. 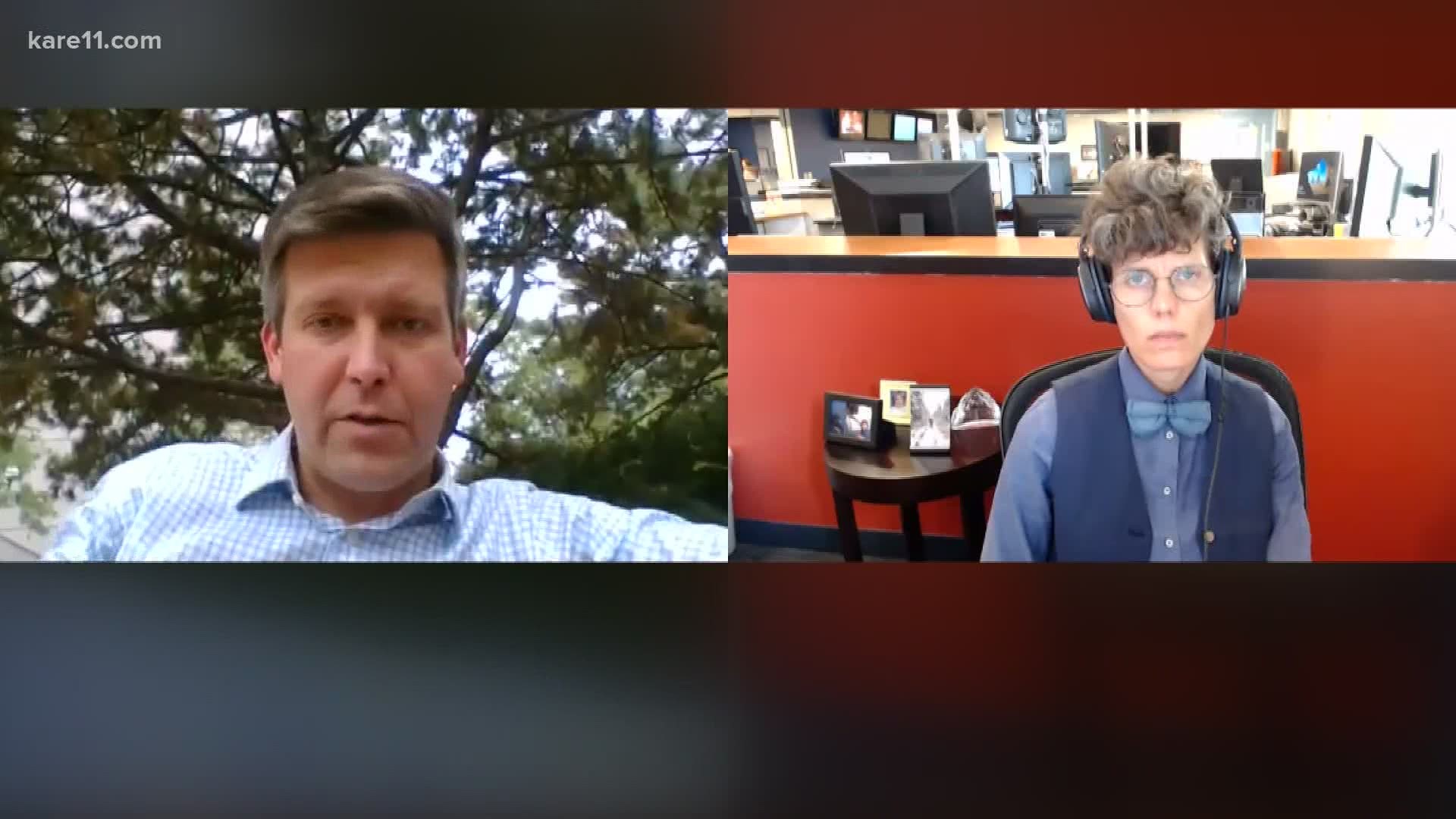 The footage then shows a three-minute struggle as the officers attempt to place Floyd in a squad car. Lane and Kueng attempt to push Floyd into the back of the car from the driver's side before Lane moves to the passenger's side and attempts to pull Floyd into the vehicle. Floyd can be heard on the video saying he's claustrophobic multiple times, and says he recently had COVID.

Officers Chauvin and Thao first appear on the body camera footage during the struggle at the squad car, with Thao helping Kueng on the driver's side, and Chauvin helping Lane pull Floyd from the passenger's side of the squad car. Floyd then falls out of the car on the passenger's side, and is heard saying "thank you" before Chauvin places Floyd in the knee restraint.

The body camera footage shows Chauvin with his knee on Floyd's neck for nine minutes and 27 seconds, nearly 45 seconds longer than the time originally cited in police reports. During this time, Lane and Kueng also appear to be actively holding Floyd down at some point, though in the last minute Kueng can be seen squatting nearby.

Lane can be heard on the video suggesting that they roll Floyd over, while Floyd is still conscious. The video also shows Floyd's movements gradually slow, he stops talking, and then stops moving.

Kueng can be seen checking for a pulse and saying, "I can't find one."

After Floyd is taken away in an ambulance, Kueng can be seen picking up a body camera off the ground near Floyd's shoe and handing it to Chauvin, indicating Chauvin's camera may have fallen off during the earlier squad car struggle.

RELATED: Attorneys for all defendants in George Floyd case object to gag order

On Wednesday, Floyd family attorney Benjamin Crump filed a wrongful death lawsuit against the city of Minneapolis and the four former officers.