Former officer Thomas Lane filed the materials as part of a motion to dismiss his charges. 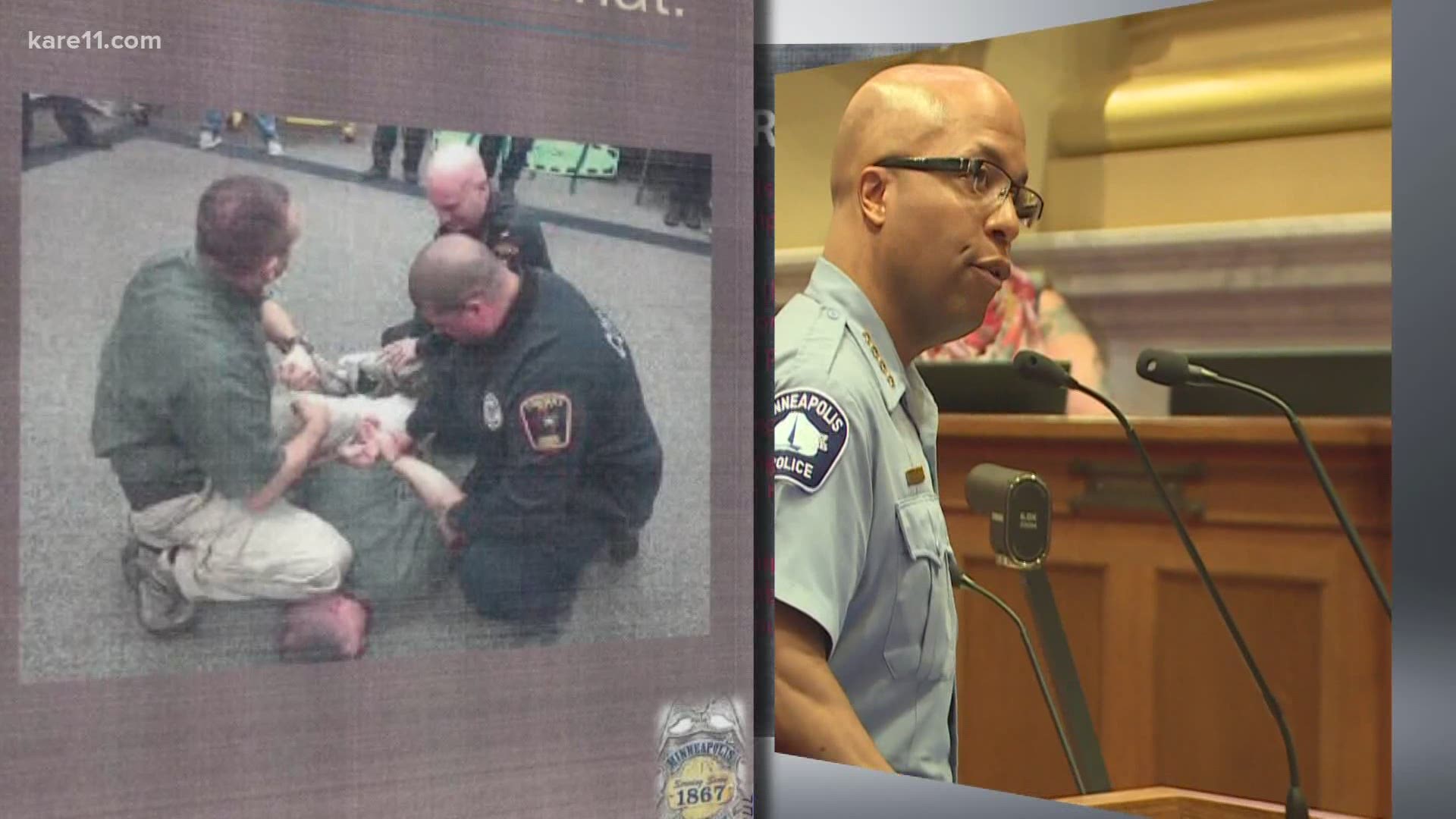 MINNEAPOLIS — In filing a motion to dismiss the charges he faces in the death of George Floyd, former Minneapolis police officer Thomas Lane included 30 pages of MPD training materials, including information on a restraint called the "maximal restraint technique," and a photo of an officer with his knee to a suspect's neck similar to the hold used by former officer Derek Chauvin on Floyd.

The training materials specify: "the maximal restraint technique shall only be used in situations where handcuffed subjects are combative and still pose a threat to themselves, officers or others, or could cause significant damage property if not properly restrained."

The slide that includes the photo states that officers should "Place the subject in the recovery position to alleviate positional asphyxia."

RELATED: Another officer involved in Floyd arrest released on bail

MPD Chief Medaria Arradondo has said in interviews and press conferences following the death of George Floyd that officers are not trained to place their knee on a suspect's neck like Chauvin did to Floyd.

An MPD spokesperson, when asked about the training materials Wednesday, said they have been advised not to comment about the open court proceedings and could not say any more on the topic.

In his motion to dismiss, Lane's attorney Earl Gray argues that Floyd continued to kick and yell as Lane held his legs, after Lane suggested using the maximal restraint technique.

"Officer Lane did not know there was a felony being committed or attempted when Chauvin was kneeling on Floyd," Gray wrote in the court filing. "If in fact a felony was committed or attempted. The training material supports that neck restraint was something taught to officers (Exhibit 7). Lane is a trained police officer who, although new to the job, knew that officers are allowed to use reasonable force when needed. Id.3 Based on Floyd’s actions up to this point, the officers had no idea what he would do next – hurt himself, hurt the officers, flee, or anything else, but he was not cooperating."

Another slide in the MPD training materials attached to the motion includes a photo of the "recovery position," which illustrates a person turned on his side.

Gray also notes that Lane twice asked Chauvin if they should turn Floyd to his side.

"Chauvin, a 20-year veteran and (field training officer) told Lane, no, keep him where he is at until the ambulance arrives. Chauvin assured Lane that Floyd was fine where he was," Gray wrote.

Gray argues that it was reasonable for Lane to follow Chauvin's direction, because it was only Lane's fourth day on the job.

Minnesota Attorney General Keith Ellison's office told KARE 11 that Ellison will oppose the motion to dismiss. His office has until Aug. 10 to do that. If Gray then believes a reply is necessary, that needs to be filed by Aug. 17.