The City of Chesapeake's service contract with TFC Recycling ends soon, and another long-term agreement hasn't been reached. 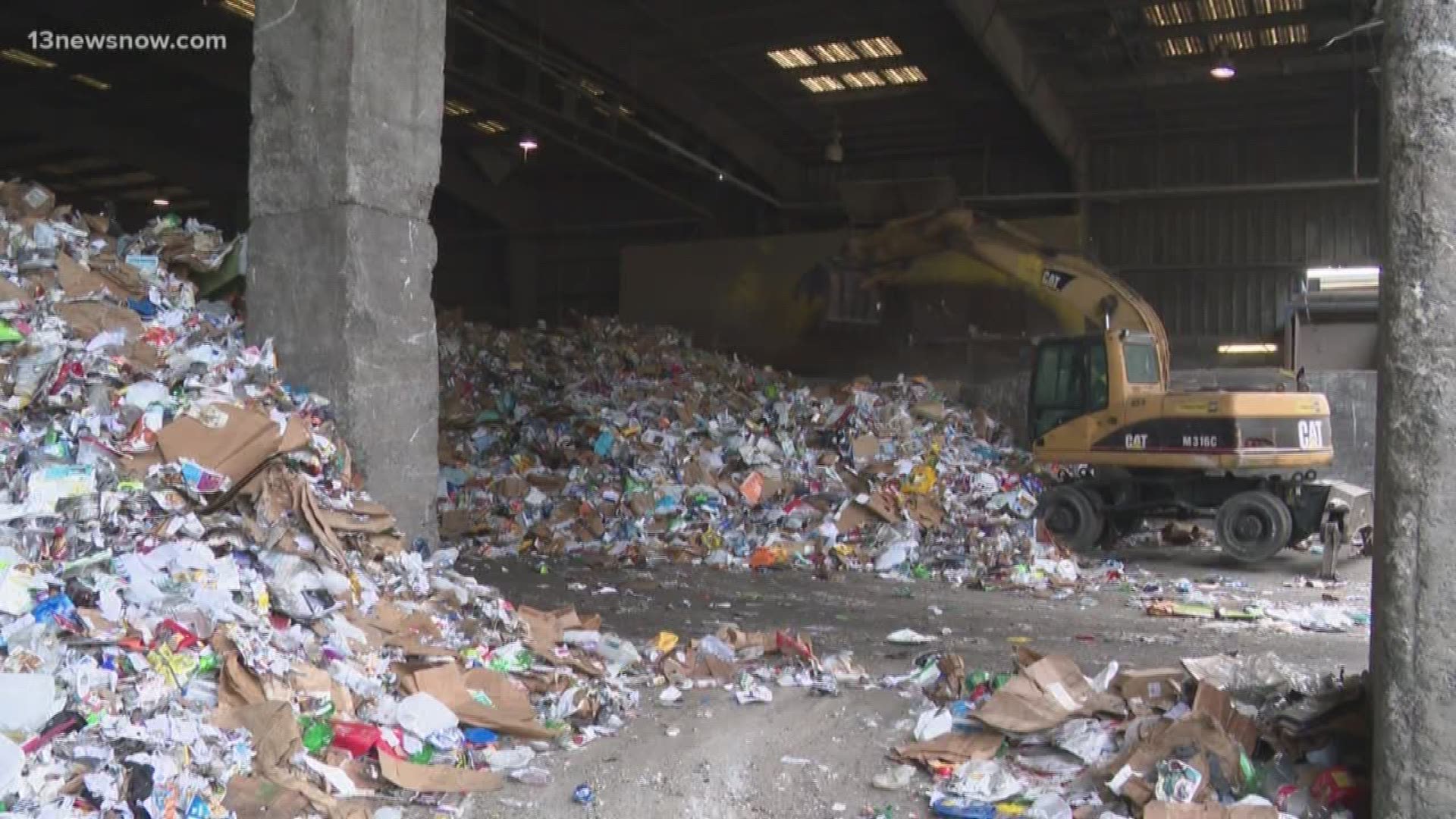 CHESAPEAKE, Va. — How important is recycling to you?

The City of Chesapeake is trying to determine whether it’ll end the service, pay more for it, or begin charging residents a service fee to keep it going.

At this point, the city has not reached a long-term agreement with TFC Recycling to keep the service going.

Theresa Wiggs, a resident of Chesapeake said recycling is a service she enjoys having. She even teaches her grandchildren how to recycle in the home.

“We recycle everything that we can, we wanna take care of our environment,” said Wiggs.

Although the city’s contract with TFC Recycling ends this Friday, recycling service in the city won’t end right away.

The city has negotiated a 3-month extension that’ll run through the end of January 2020.

Michael Benedetto, the President of TFC said a huge chunk of the materials they recycle come from Chesapeake.

Benedetto said 14,500 tons of materials from Chesapeake make it to the facility every year. If the city ends the service, those materials won’t be recycled.

“It would be a crime if we actually canceled recycling. It’s so important to so many people,” said Benedetto. “So many people have this as an ingrained habit and they feel like they’re doing something good for the environment every time they put something in the recycling bin.”

Benedetto said the city has several options: renew another contract at a higher cost, end the recycling service altogether, or begin charging residents a user fee to recycle.

Currently, all other cities in Hampton Roads are already charging residents a recycling service fee.

Benedetto said a new contract would cost the city more because of the industry-wide rising cost of recycling.

“China recently banned certain materials from entering their country. What happened was the supply was still being created as the demand from China dropped off. Because we can’t sell it for as much material as we were, the price is gonna go up,” said Benedetto.

Tammy Givens, a resident of Chesapeake said she hopes the city will continue the service.

13News Now reached out to the City of Chesapeake for a statement, but we have not heard back as of yet.

Benedetto said if the city decides to end this service, it’ll have to create its own recycling program or take the trash to Wheelabrator, a waste-to-energy facility in Portsmouth.

The Department of Public Works has worked diligently to explore the economic and operational demands of these options, and will provide the information to City Council to enable them to make a decision that strikes a balance between responsible usage of taxpayer resources and providing a favorable service that contributes to environmental protection.

It is important for residents to understand the realities and challenges that the curbside recycling program faces, of which declining market values and contamination are significant drivers. Two-thirds of the volume by weight of items collected through the City’s curbside recycling program have no value in the current recycling market, and when coupled with improper contaminants introduced to the recycling stream – examples include plastic bags, take-out containers and cups, batteries, metal hangers, diapers and other non-recyclable garbage – the cost to process the materials collected increases significantly, while much of the non-recyclable materials find their way into landfills or waste-to-energy plants.

We encourage residents who wish to recycle to learn what they can and cannot recycle, and to always only place recyclable items into their blue curbside bins or communal recycling containers and dumpsters. A list of recyclable items and additional information about recycling in Chesapeake can be found at  www.cityofchesapeake.net/recycle."