The City of Virginia Beach is preparing to alter a portion of the shoreline forever. 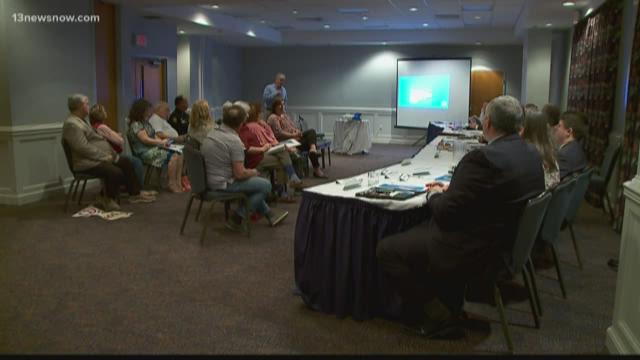 VIRGINIA BEACH, Va. (WVEC) -- The City of Virginia Beach is preparing to alter a portion of the shoreline forever.

The city proposed to change the status of the Lesner Municipal Wharf from temporary to permanent. On Thursday, a handful of residents spoke out against this plan at the Bayfront Advisory Commission meeting.

“I moved here four and a half years ago from Richmond and I moved here to live by the water and I want to preserve that pristine water,” said Melissa Pulling.

Pulling was one of those at the meeting armed with a sign with the word wharf with a big X through it.

“They are taking advantage of a situation, no one knows about the long range, long-term plans that could come down,” said Pulling.

The wharf was approved on a temporary basis back in 2012, as part of the Lesner Bridge construction. Now, the city wants to keep the wharf permanently.

Coastal Engineer Phill Roehrs said it will be an asset for dredging and bridge maintenance projects.

“They bring a very large dredge plant to do that work, it needs a place, this will be an ideal site for that purpose,” said Roehrs.

Williams said she’d like to see an environmental study. The city said it’s unnecessary, and they don’t believe it will have any sort of impact on the environment.

However, residents said environmental impact or not, their little piece of paradise is no longer a beach it’s a construction site.

“It was a beautiful place to go, it’s not beautiful anymore, it’s ugly,” said Williams.

“You are going to make it from a pristine waterway area into a commercial wharf area and I think that’s wrong, it’s not keeping with the neighborhood,” said resident David Williams.

The wharf becoming permanent is far from a done deal, the city is still waiting for the state and federal approval which could take another six months.