The City of Chesapeake will now hold its elections in November, following a new Virginia law. But city council will decide on an even-year or odd-year cycle. 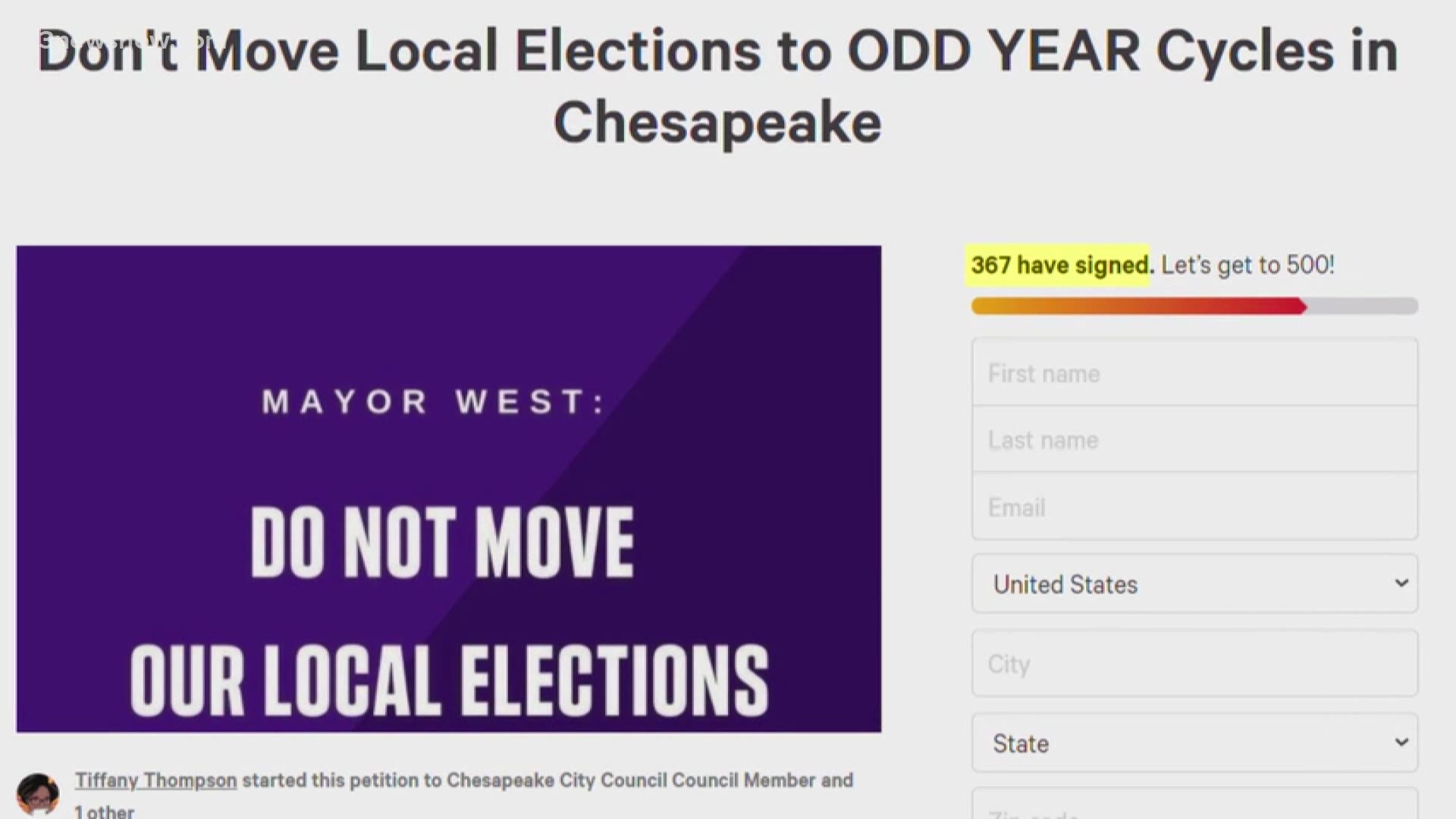 CHESAPEAKE, Va. — Chesapeake Mayor Rick West wants to move city elections to November of odd-numbered years, but some Chesapeake voters say the proposal is a form of voter suppression, as most people vote in even-numbered and Presidential election years.

West's proposal and city ordinance is a response to a new Virginia law, which shifts all city council and school board elections from May to November throughout the Commonwealth.

If the Chesapeake elections are moved to odd years, the terms of 10 city representatives - five city council and five school board members - would be cut six months short, rather than extended six months to match up with the new election cycle.

“We should be encouraging people to vote, not putting things on the ballot during years when there’s no turnout," Thompson said. "When more people vote, we win, as a democracy, we win.”

West said in an odd-year election cycle, city issues would be more aligned with state issues and less influenced by national races.

Chesapeake City Council will hold a public hearing on the proposal Tuesday night, with a vote likely to follow.

"This is not normal, people need to understand that the vast majority of Virginia cities and towns have their elections in even years," said Chesapeake voter Jeanne Hanewich. "It’s very disingenuous and [Mayor West] really needs to have more faith in the public and the voters."

Thompson said the odd-year plan and its impact on the current terms of 10 elected officials unfairly punishes the people who voted for them.

"What we can do is err on the side of the people, which is to extend their terms as opposed to cutting them short," she said.

Thompson said, for her, it's mostly about true representation for the highest number of voters.

“This is a representative democracy, and if we’ve learned anything over the last couple of years it’s that it makes a difference, we all need to be involved," she said. "It should be easy to vote, streamlined, it should not be confusing.”

Thompson created a petition against the city council proposal.

Mayor West did not respond to a request to interview with 13News Now about the odd-year election ordinance.

Chesapeake City Council is accepting public comment on the issue before Tuesday's hearing. Voters can call the city clerk's office or email council@cityofchesapeake.net by 4 p.m. on Tuesday, April 13. Or, they can call 757-520-1250 between 5:45 and 6:30 p.m. Tuesday night to be "placed in a queue to speak."