It's called an M-RAT. It's designed to fit into smaller or crowded places that a bigger ambulance can't reach. 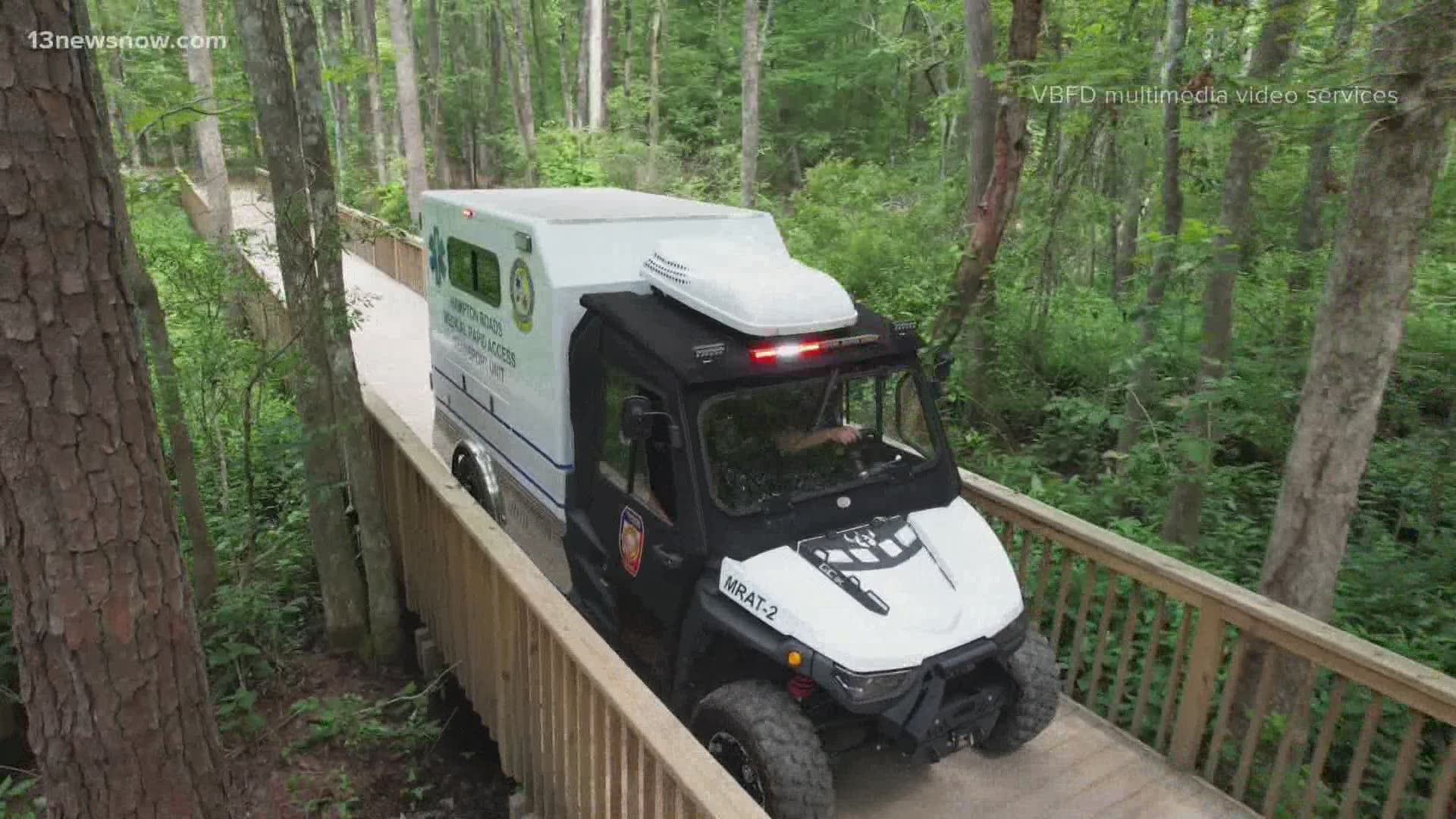 CHESAPEAKE, Va. — First responders in Hampton Roads have a new way to help you out, in case of an emergency.

The Chesapeake Fire Department is one of four departments in the area with an "off-road" medical unit, designed to travel into tight spaces where an ambulance just won't fit.

It's called a Medical Rapid Access Transport Unit – or M-RAT, for short.

"It goes off-road and into those rural areas that you typically can't get a vehicle into," Hackett said. "Back in trails, back in woods."

It can travel into smaller, hard-to-reach areas where an ambulance can't. For example, if you're injured while hiking a narrow trail at Northwest River Park, this is how you'll get out.

Lt. Jason Coup of the Chesapeake Fire Department explained it's just a way for first responders to render aid to patients while they're transporting them out of a small area to a bigger ambulance.

"It doesn't just have to be in this kind of setting in a park. It could be on a large farm complex where somebody might be hurt in the backside of a farm. We're able to get back with this unit," Coup said.

When an ambulance can't fit, there are only a few options if you're injured: first responders can strap you to an ATV – which can be a bit of a rough ride, or someone has to carry you out. This M-RAT solves that problem.

"You can provide care right there and transport without manually carrying someone out of an area," Hackett said.

Coup added, "They'll have IVs, cardiac emergency equipment, so we can perform just like we would normally do in our normal ambulances."

And it's not just for rural trails or farms. It also works great for crowds.

"This M-RAT could have been used at the shooting in Virginia Beach," Hackett said. "The Las Vegas shooting, we had a few years ago. When there's a lot of people in a crowded area, go in there quickly and easier."

Hackett continued, "They can be used for Bay Day's, Harbor Fest, Something in the Water."

Chesapeake plans to put the M-RAT into action at the Fourth of July celebrations, this weekend.

"Working for the Jubilee for as many years as I have in the past, when you get that amount of crowd out there and somebody's injured, it's very hard to get a normal-sized medic," Coup said.

"The unit is about a third the size of a normal medic unit - height, width, and length size. So it allows us now to go through a crowd of only about seven foot or eight-foot-wide, instead of us trying to clear a way of about 14 or 15 foot to safely move the medic through."