Dominique Vaughan organized Saturday’s event, Gloves Up, Guns Down. He said it felt necessary to try to bring something positive to the Holly Cove community. 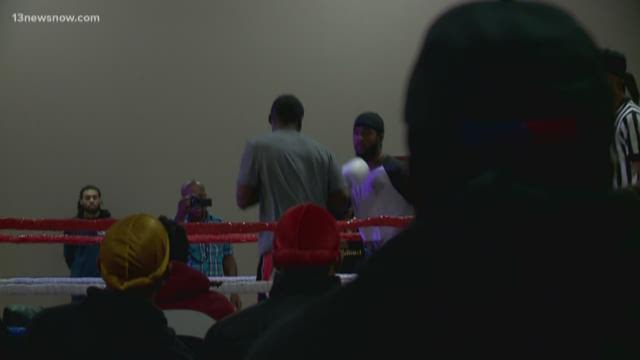 The shooting left 9 people hurt and one man dead after gunfire tore through a block party in the Chesapeake neighborhood.

He said it felt necessary to try to bring something positive to the community after what happened during the block party, an event Vaughan also organized.

“It just shows you how quickly life can change. I want to provide a platform for children, so they can not only box but receive mentorship,” said Vaughan.

“People our age grew up fighting each other, so we didn’t use the gun. It’s the younger generation that’s using the gun. So, we have to provide a platform to allow them to get something off their chest.”

For Vaughan, it’s about engaging the community and sending a clear message: that gun violence isn’t the answer. He wants to provide an outlet for people dealing with life’s hardships.

Boxing provides the kind of guidance and mentorship Vaughan wishes he grew up with. He spent four years behind bars.

When he got out, he was determined to reach out to the youth in hopes of creating change.

Since the shooting, neighbors have been working with the city to come up with solutions for safer streets and to help kids in the neighborhood.

A task force was established and it comprises a wide range of people from the city manager's office, police and fire, the Holly Cove Civic League, the YMCA, and the Boys & Girls Club.