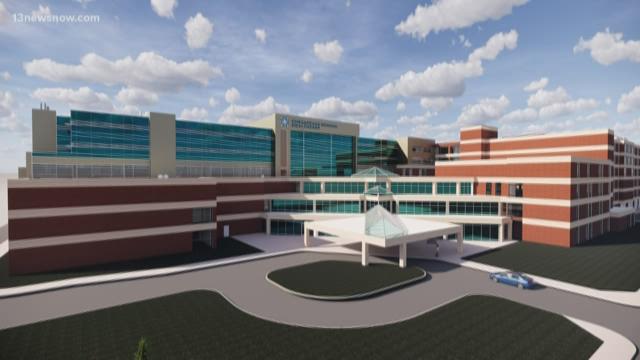 Leaders in the community and at the hospital cheered for the new milestone, during a groundbreaking ceremony Thursday. This project started in July 2019 and the last portion of the project should be completed by July 2022.

The hospital renovation has three parts to it. One is constructing a three story ‘Critical Care Tower,’ and adding to the back of the existing building.

In all, it will add72,000 new square feet to the hospital and expand the cardiac diagnostic space, to build new hybrid operating rooms.

RELATED: Meet the first babies of 2020 born in Hampton Roads

He said, "with this project, we can make greater use of our licensed beds. So, we are licensed for 310 beds, we don't staff 310 beds, this will allow us to have that elasticity."

The second change is expanding the obstetrics space, so new moms will have one and a half times bigger rooms, compared to the current size.

All of the work will double in size to bring cancer care to the community, with additional technology.

City of Chesapeake Mayor, Richard ‘Rick’ West said, “it's not only what they're doing today it's what they are going to be doing tomorrow.”

West said this big project is symbolic of the growth the city is going through. "It's so vital, healthcare is important. The population is getting older. And we need it and we need it where it is,” said West.

Shortly after the groundbreaking, there was a ribbon-cutting, for a separate Chesapeake Healthcare project.

Officials cut the ribbon for a new pharmacy called the Chesapeake RX Pharmacy.

Jackson said the community asked for it because there wasn't a full-service pharmacy in South Norfolk.

It costs $500,000 to renovate the 3,000 square-foot space inside of the Bainbridge Marketplace and it now fills the significant need in the area.