The President and First Lady met with airmen and soldiers during their stop in Hampton Roads. They thanked military members for their service ahead of Memorial Day 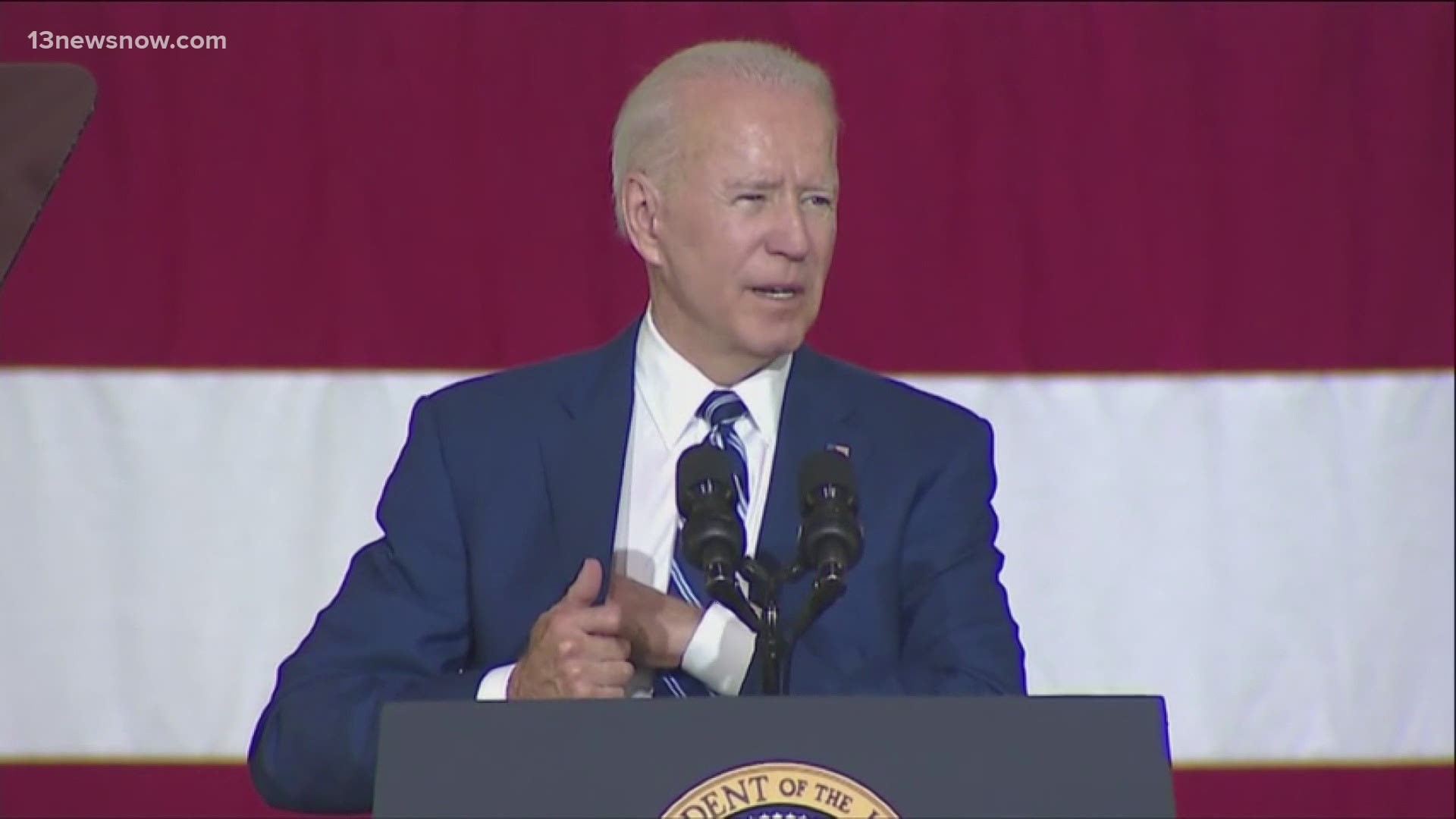 The Bidens landed at Langley Air Force Base, then headed into the 27th Fighter Squadron Hangar.

“Each year Memorial Day offers us a chance to reflect on the enormous sacrifices that generation after generation of Americans have made and the responsibilities we bear, the citizens bear, in return.”

President Biden's speech was subdued, reflective, calm, and appreciative. He often referenced his late son Beau Biden and he told service members they are the "absolute best America has to offer."

“You are the spine of America, the spine," President Biden said. "We owe it to you."

President Biden was most passionate when defending American democracy, saying generations have fought and died to defend the idea that founded our country.

“America is born out of an idea, we hold these truths to be self-evident that all men and women are created equal - endowed by their creator," he said.

He also praised military members and their families for dealing with COVID-19 protocols and guidelines this past year while managing deployments.

“Thank you for your commitment to our country," President Biden said.

This is the second visit President Biden has made to Hampton Roads. Biden and the First Lady made several stops in Hampton Roads earlier this month as part of the White House's Getting America Back on Track Tour.

They stopped in Yorktown and visited a fifth-grade classroom at Yorktown Elementary School. They also visited the Tidewater Community College Portsmouth campus.

“We are privileged to host President Biden and the First Lady to talk to them about what makes the JBLE community unique,” said Col. Clint Ross, JBLE installation commander. “We provide mission-ready expeditionary airmen and soldiers in support of joint and combined operations worldwide. It’s an honor to showcase our people and some of our mission capabilities to the president, first-hand.”

Congresswoman Elaine Luria (D-2nd District) and her husband, Robert Blondin, joined the Bidens on the visit.

In April, Luria invited the president to return to Hampton Roads to look at Naval Station Norfolk and the Norfolk Naval Shipyard.

Gov. Ralph Northam also was present for the presidential visit, along with Congressman Bobby Scott.

Bidens Visit to Joint Base Langley-Eustis

1 / 7
Evan Watson, 13News Now
President Joe Biden and Dr. Jill Biden speak to and meet military members at Langley Air Force Base during their visit to Joint Base Langley-Eustis on May 28, 2021.