Confederate monument covered in a tarp in Newport News

City leaders in several cities across Hampton Roads are implementing new plans to make sure people do not climb or spray paint Confederate monuments. 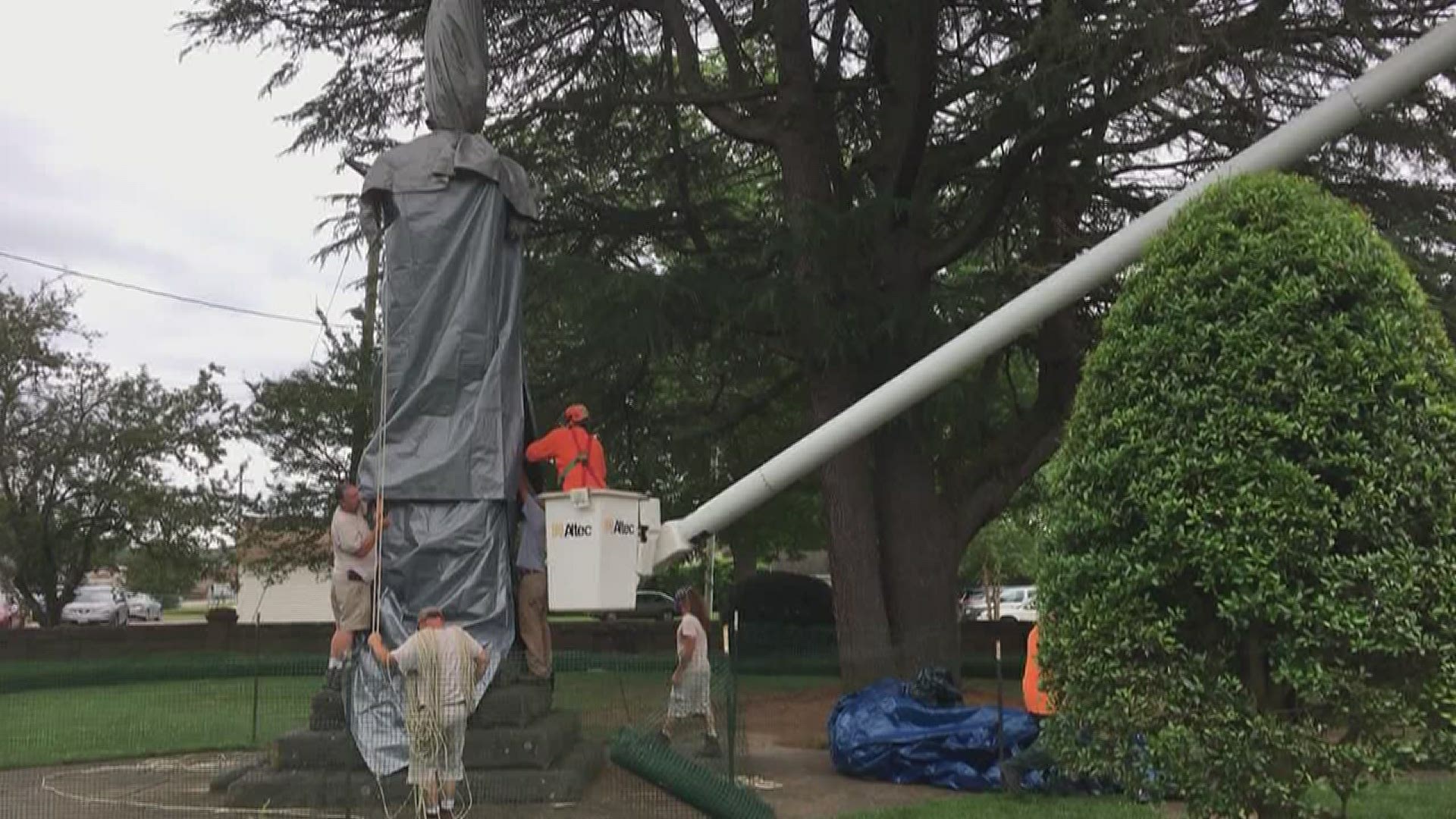 NORFOLK, Va. — Cities across Hampton Roads with Confederate monuments are coming up with plans after protesters in Portsmouth knocked a memorial down and seriously injured a man on Wednesday night.

In Newport News on Thursday, city crews wrapped the city’s monument in a tarp for safety measures. They also added a small fence around the perimeter to make sure people don’t climb on it.

“There is a Confederate monument located in the City of Newport News in front of the old Warwick Courthouse in Denbigh. The monument, while owned by the City, is under a State Easement Agreement through the Department of Historic Resources. The agreement requires the City to obtain permission from the State Board of Historic Resources before making any changes on the site. We are petitioning the Department of Historic Resources to consider the City’s request for the possible removal or relocation of the monument. Once the City receives that determination, the City will follow the amendments to the State Code governing memorials for war veterans that will take effect July 1, 2020.

“In light of recent demonstrations that resulted in injuries and in an effort to protect the safety of the public as well as avoid destruction of the monument, the decision was made to temporarily cover the statue until disposition of the monument can be determined by City Council. The decision was made in consultation with the City Manager and the Police Chief in the best interest of the safety and well-being of our citizens.”

Over in Suffolk, a spokeswoman for the city confirms there are no Confederate monuments on city property. She says the statues are located in a private cemetery.

York County officials say their monument is a war memorial that lists names of York County citizens who died during conflict dating back 1676. At this point, leaders say they have no plans to install fencing or add any security to the location.

Norfolk Mayor Kenny Alexander is telling people not to attempt to scale the 80-foot monument in the middle of downtown Norfolk. Norfolk city leaders say police officers are assigned to monitor the monument and they will remove anyone who attempts to climb it, but at this time, there are no plans to put up fencing or other barriers.

Mayor Alexander released a statement to the community:

"While we welcome peaceful demonstrations at the monument at Commercial Place, we want everyone to understand that the size of the monument, it stands at 80 feet, does not lend itself to safe removal without the use of a truck-mounted construction crane," Mayor Alexander said in a statement. "Out of an abundance of caution, anyone who attempts to scale the monument will be removed in the interest of their own safety."

Norfolk City Council has already said it wants to move its 80-foot "Johnny Reb" statue to Elmwood Cemetery, where there are other Confederate memorials. However, the city must wait until a new law goes into effect on July 1, which will allow them to begin the process for removal.

Mayor Alexander's full statement is below:

Across the country, people are demonstrating in remembrance of lives lost to police violence and hate crimes. Thousands have participated in the peaceful protests in the City of Norfolk and we hope that this very important dialogue will continue. But it is extremely important that we all stay safe.

While we welcome peaceful demonstrations at the monument at Commercial Place, we want everyone to understand that the size of the monument, it stands at 80 feet, does not lend itself to safe removal without the use of a truck-mounted construction crane. Out of an abundance of caution, anyone who attempts to scale the monument will be removed in the interest of their own safety.

City Council has been unequivocal in expressing its desire to remove the monument. In August 2017, Norfolk City Council unanimously passed a resolution to remove the monument as soon as permitted by state law. During the 2020 Session of the Virginia General Assembly, legislation was adopted, HB1537, that cleared legal hurdles that prevented us from moving forward. This law is effective July 1. On June 2, after our City Attorney presented steps that we must follow for its removal, City Council voted to schedule the required public hearing on July 7 for discussion of removal. It is our intent to remove the statue by August 7, the earliest possible date allowed by law.