Alan Diamonstein, a lawyer and former Virginia delegate who worked to secure support for the state's schools and colleges, has died. He was 88. 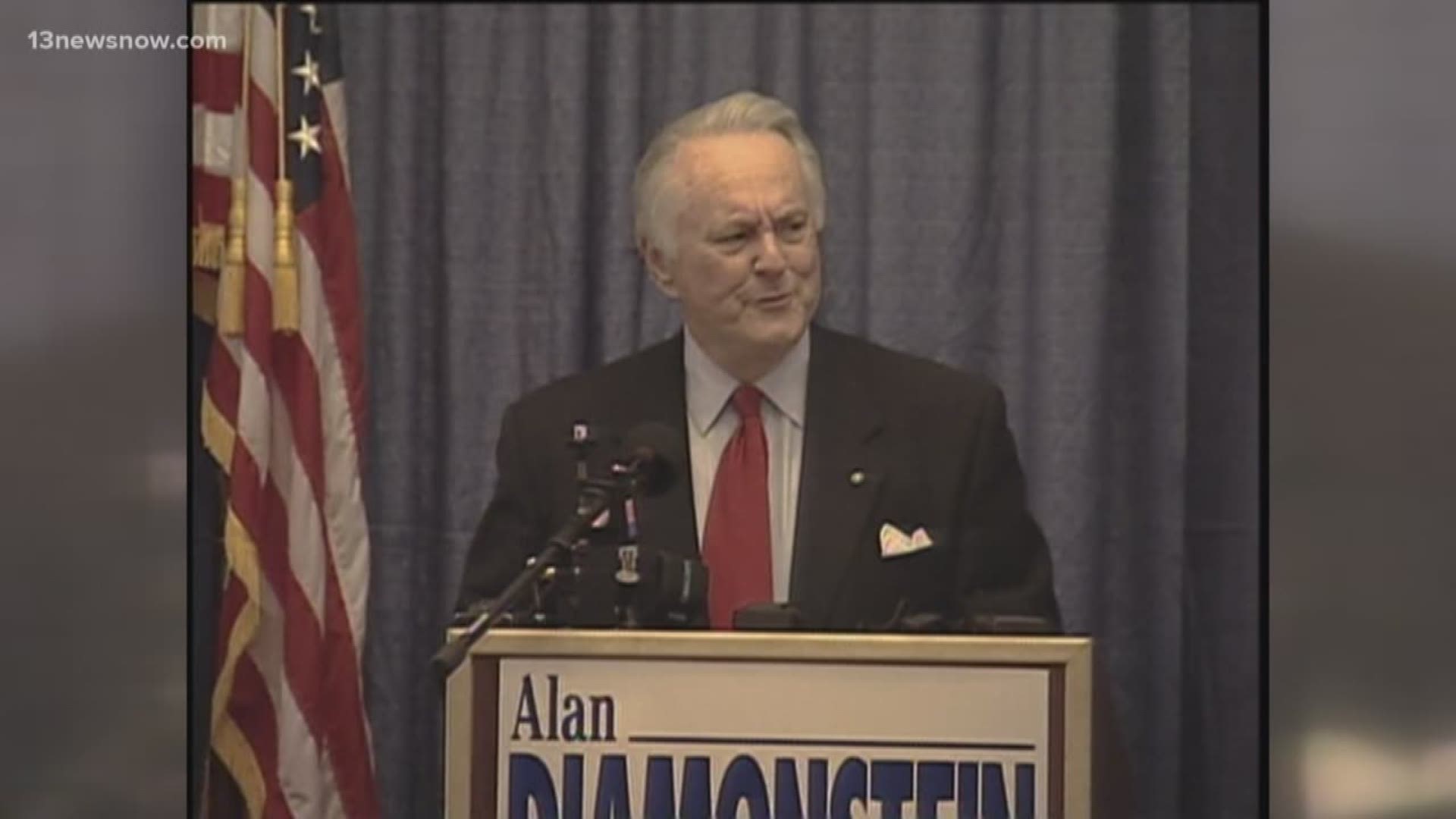 NORFOLK, Virginia — A longtime former delegate has passed away.

Alan Diamonstein died Thursday morning at the age of 88. Diamonstein represented Newport News in the House of Delegates for 30 years as a Democrat.

Diamonstein was elected to the General Assembly in 1967 and served until 2002. While in the House of Delegates, Diamonstein also focused on housing, and on helping people with mental illness and disabilities.

According to the Virginia Port Authority, he also served on the Board of Commissioners for the Port for several years starting in 2014.

Diamonstein helped spearhead the oversight of the port's $750 million expansion on two of their primary container terminals.

The Daily Press described Diamonstein as an advocate for Christopher Newport University, earning him the nickname "Mr. CNU." Many buildings on the campus were built because of his efforts.

A memorial service is scheduled for Sunday at the Alan and Beverly Diamonstein Concert Hall at Ferguson Center on the CNU campus.

“I was deeply saddened to learn of the passing of former Delegate Alan Diamonstein.  In 1977, I was honored to join Alan and Ted Morrison as members of the Newport News delegation in the Virginia House of Delegates.  He helped me to quickly become accustomed to the way business was conducted in Richmond.  In addition to being a seasoned legislator and accomplished lawyer, Alan was a champion for the city of Newport News and a fierce advocate for fair housing.  He was largely responsible for the creation of the Virginia Housing Development Authority, an agency which has helped numerous Virginians attain quality and affordable housing.  He was also a dedicated member of numerous boards and commissions throughout Hampton Roads, including the Port of Virginia and the Mariner’s Museum, and he was a driving force in the expansion of Christopher Newport University.

“I considered Alan to be a gentleman, a dear friend, and mentor.  He graciously served as the chair of my first congressional campaign’s finance committee and served in that capacity for many election cycles afterward. My thoughts are with his wife Beverly, his family and the many people who have benefited from his work.”

“I am deeply saddened to hear of the passing of former Delegate Alan Diamonstein.

“For decades, Alan was a tireless advocate for our Commonwealth and its future. Virginia has one of the best systems of higher education in the nation because of the decades of work Alan dedicated to making it so. He led the Commonwealth’s investment in our colleges and universities—they are stronger today because of his commitment to these institutions and the students they serve. Alan helped create the Virginia Housing Development Authority, and advocated for state support for people with mental illness or disabilities. He worked to bring more women into the political process, at a time when that work was sorely needed. He was a true public servant.

“Alan has always been a friend to Pam and me, and I will miss him dearly. The Commonwealth is a better place for Alan’s service."

“Alan was one of the best Democrats I’ve ever known and had one of the best senses of humor I’ve ever known. For years, I’ve leaned on him for advice more times than I can count, and that advice was, without exception, good. I consider myself fortunate to have known him, and my condolences go out to Beverly and the rest of the Diamonstein family.”

“Alan Diamonstein was a powerful force in Virginia, national politics and his community. He was a major figure in making our Commonwealth a more inclusive, forward-looking and fairer place.

I was proud to call him an adviser and a mentor, but most importantly – my dear friend.

I will miss Alan very much, and will be thinking of Beverly and their children during this difficult time.”