A young artist in Newport News is turning heads with his rap skills, clean lyrics, and positive message. 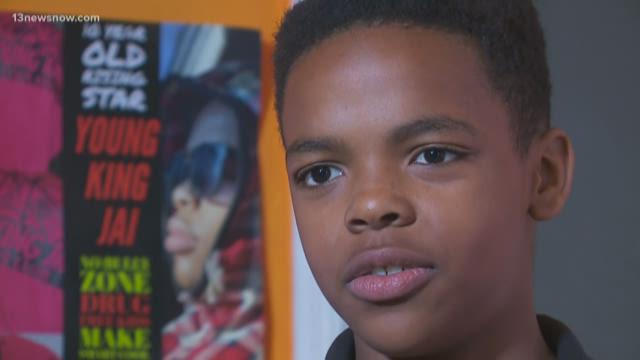 Hearing a kid sing along with their favorite song is not out of the ordinary... until you realize it's their voice on the track.

11-year-old Jairus Smith says he loves the rap music vibe, but not always the verbiage.

"I was pretty much just listening to music, and then all I heard was cursing and stuff," says Jairus. "So, I wanted to make something kinda different."

That's how "Young King Jai" came to be.

"I told my dad I wanted to rap," he says. "And then, we recorded my very, very first song which was 'Drip Got Splash'... it's pretty much, like, just about my swag and drip."

Since then, he's already dropped three albums, and they've been getting attention, not just because of his age, but his lyrics.

"I made it drug-free, positive, clean, lit music for all kids," Jairus says.

He recorded the song "No Bully Zone" and then started a school tour of the same name, performing for kids and encouraging them to make the grad, steer clear of drugs, and put an end to bullying.

The word "young" may be in his artist name, but two of Jairus' siblings are younger, and he knows they're listening to his music, too.

"I hope [my younger brothers] get... inspiration, and I want them to follow their dreams and be successful."