Authorities say 3-month-old Jiraiya Cherry was found safe in Chesterfield. A person is in custody. 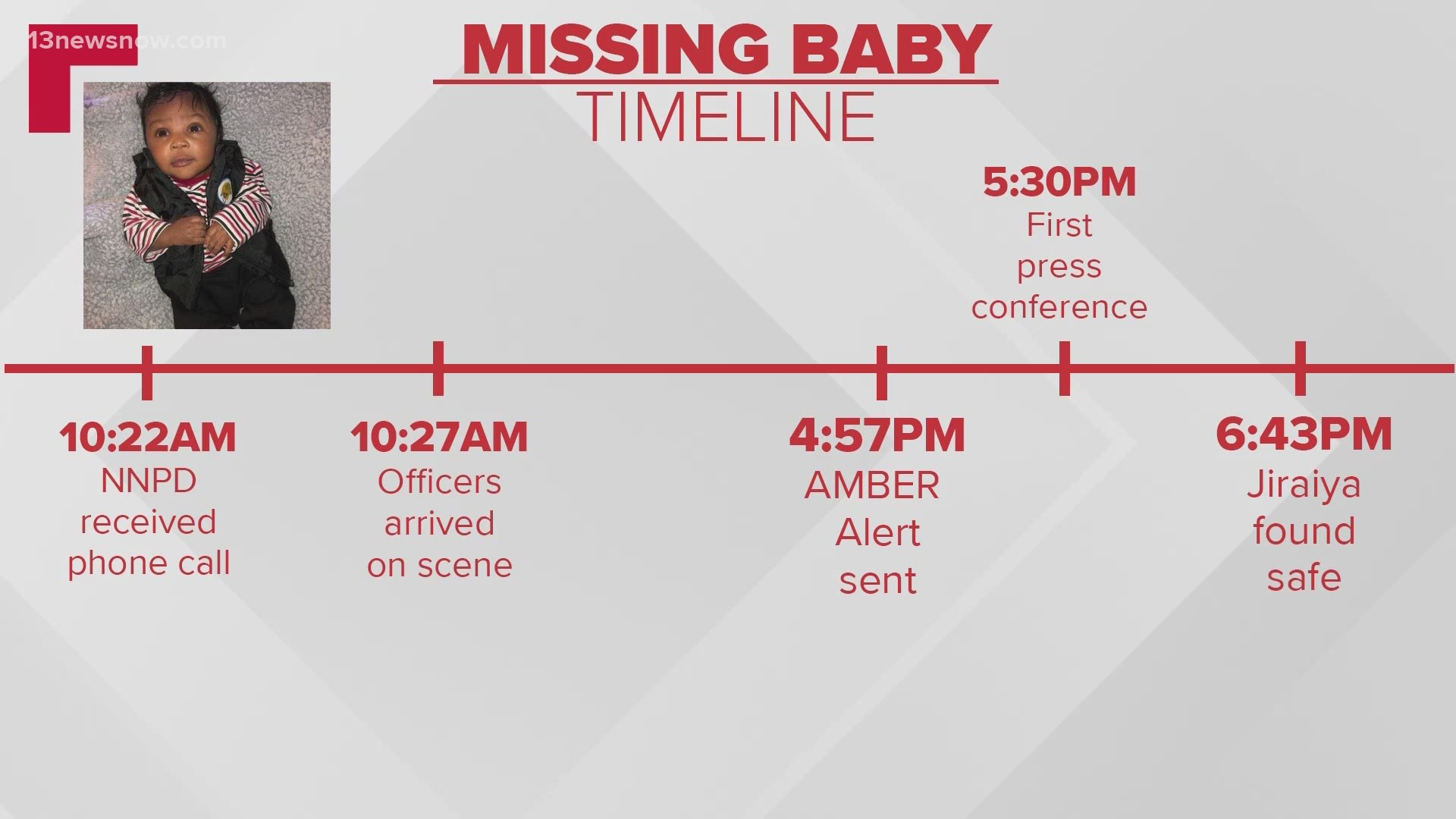 NEWPORT NEWS, Va. — A 3-month-old boy abducted in Newport News has been found and is safe.

In a news conference update shortly after 7 p.m., Chief Drew thanked the media and the public for their help in finding Jiraiya safely.  He gave no details on the person in custody or how the child was found, but called Jiraiya's safe return a "huge success."

Drew said Jiraiya was found at 6:43 p.m. and is currently being checked out by Chesterfield paramedics.

It's a happy ending for baby Jiraiya and his family, but authorities faced questions on why it took over six hours from Jiraiya's disappearance in Newport News before an AMBER Alert was issued.

Chief Drew said issuing an alert is a tedious process and police need to make sure they have accurate information before releasing it to the community.

“We pulled every detective we have in this city to focus on this case,” Chief Drew said during a press conference.

“At 10:27 the officer responded to the scene and began an immediate investigation,” Drew said.

However, the AMBER Alert was not sent out until 4:57 p.m.

“I wish in a perfect world at 10:22, we got a call and we could put it out right away, but that is just not the case,” Chief Drew said.

State Police oversee issuing the alerts, but they need five key things from the investigating police department before that can happen:

Chief Drew said they also need to be careful not to ruin any leads. He said Jiraiya’s safety was top priority and they sent criteria for an AMBER Alert to state police at 2:11 p.m., but it was sent back for verification.

“Some of those things that we needed to verify before we went to that information with state police about the AMBER Alert, that we just could not get until we had some key points of those interviews done,” Chief Drew said. “That is why there was a delay there.”

Newport News Police did send a media release about a “reported” abduction about 30 minutes before the alert went out. It had information and a photo of Jiraiya.

“The information has to be accurate, and I want to share with the community, and our residents here at Newport News, that Jiraiya is safe,” Drew said.

Chief Drew said the baby was found at 6:43 p.m. in Chesterfield.

“I think that the family is all breathing a sigh of relief,” Drew said. “I know I talked to three personally that all broke down in tears.”

Police said the person who took Jiraiya is in custody, but authorities have not yet publicly identified that individual. They're still piecing together exactly what happened.

He says the baby has been checked out by medics. #13Newsnow pic.twitter.com/VJWXoQgvCT

Newport News police said they received a call from the 13300 block of Preakness Drive that Jiraiya had been abducted by an unknown babysitter. The last time anyone there saw Jiraiya was around 9 a.m.

Investigators still were looking into the circumstances surrounding and leading up to Jiraiya's disappearance.

Officers said Jiraiya is Black with a light complexion and dimples. He's approximately 10 pounds and has brown hair. He was wearing a red and white striped onesie with blue pants before he disappeared.

This is where police say the child was last seen. This apartment complex in 13300 block of Preakness Drive in #NewportNews. Child was last around 10am.

We’ve been on scene since around 3pm. Police still here. #13newsnow pic.twitter.com/Z7Zi8B4FVt

The woman believed to have taken him is about 24 years old, approximately 5'5" to 5'6" tall, with black dreadlocks down to the middle of her back. She has a southern accent. She was wearing a black face mask with a black jacket. She may be driving a four-door silver car with Virginia plates.

Newport News Police Chief Steve Drew held a press conference later in the day on the abduction, stating that the police department is conducting a thorough search for the baby.

"We're not going home. We are going to find Jiraiya. This is the top priority of the Newport News Police Department," Drew said.

When asked why an AMBER Alert wasn't sent out Thursday morning once authorities learned that the child had gone missing, Drew explained the process for the alert.

There are five criteria that need to be met before an AMBER Alert is sent out. Although police had received a report that the baby was kidnapped that morning, they spent much of the day conducting interviews and gathering key information to meet those standards before notifying Virginia State Police.

Anyone who knows where Jiraiya is can call Newport News Police Department Emergency Communications at 757–247–2500 or Crime Line at 1-888-LOCK-U-UP.