NEWPORT NEWS, Va. (WVEC) -- - Embracing a stronger defense, President Donald Trump met with sailors and shipbuilders on the aircraft carrier Gerald R. Ford in Newport News, as he promoted his plans for a major military buildup. 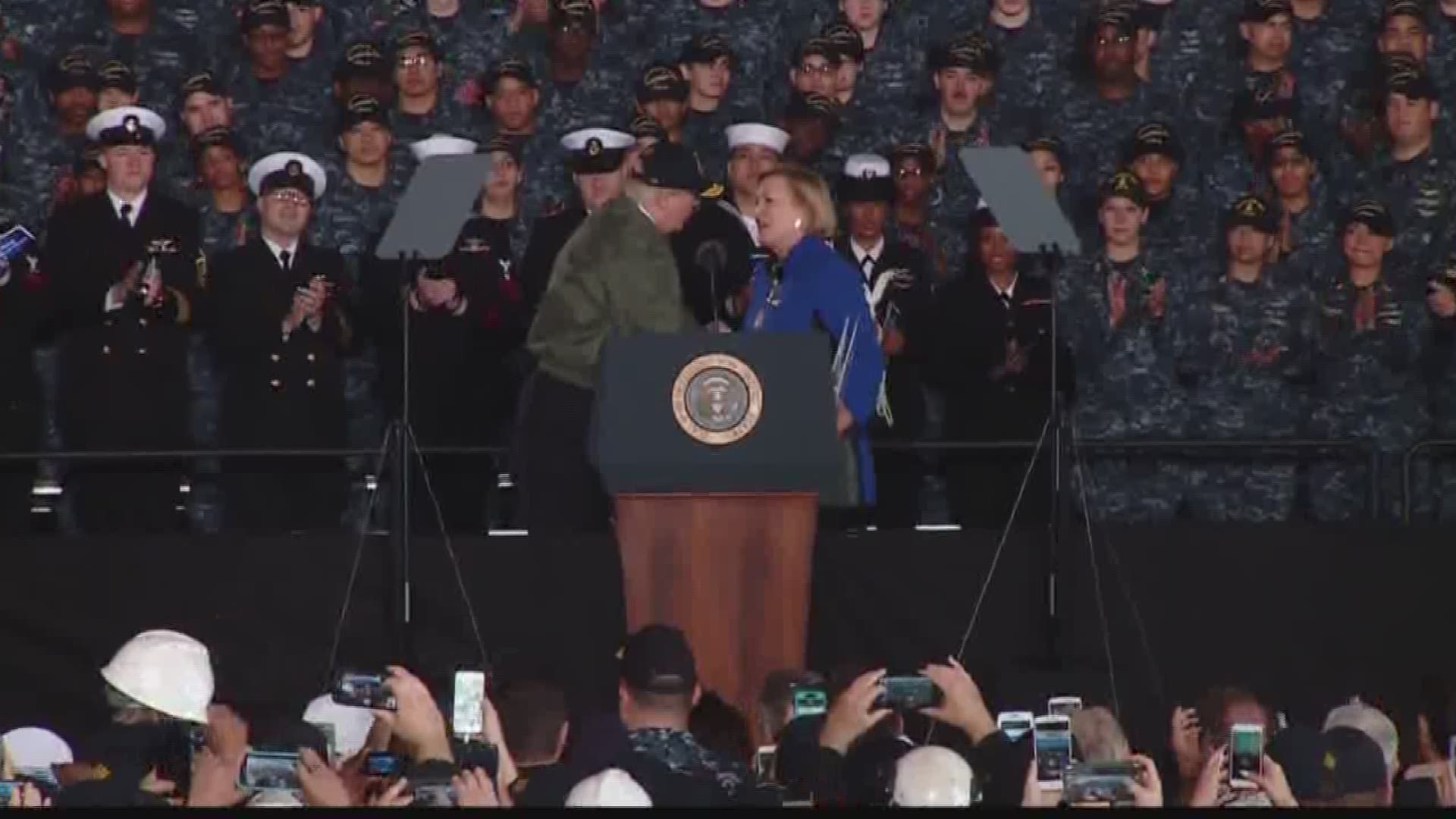 NEWPORT NEWS, Va. (WVEC) -- - Embracing a stronger defense, President Donald Trump met with sailors and shipbuilders on the aircraft carrier Gerald R. Ford in Newport News, as he promoted his plans for a major military buildup.

Trump traveled Thursday to Hampton Roads to deliver a speech aboard the Gerald R. Ford, a $12.9 billion warship that is expected to be commissioned this year after cost overruns and delays. Wearing a red USA cap, Trump saluted sailors as he arrived on the carrier.

Before his remarks, Trump was asked about the revelation that Attorney General Jeff Sessions twice talked with Moscow's U.S. envoy during the campaign, contact that seems to contradict Sessions' sworn statements to Congress during his confirmation hearings.

Trump also said he "wasn't aware" that Sessions had spoken to Russia and said that he "probably did" speak truthfully to the Senate.

During his trip to Newport News, Trump was joined aboard Air Force One by Defense Secretary Jim Mattis.

The visit was the President's first to Hampton Roads since his pre-election campaign stops.

A draft budget plan released earlier this week by the White House would add $54 billion to the Pentagon's projected budget, a 10 percent increase.

"To keep America safe, we must provide the men and women of the United States military with the tools they need to prevent war - if they must - they have to fight and they only have to win," Trump said in his address to Congress on Tuesday night.

Trump, in his 2016 campaign, repeatedly pledged to rebuild what he called the nation's "depleted" military and told supporters at Regent University in Virginia Beach in October that the region's naval installations would be "right at the center of the action with the building of new ships."

He often argued that the U.S. military was too small to accomplish its missions and pledged to put the Navy on track to increase its active-duty fleet to 350 ships, compared to the current Navy plan of growing from 272 ships to 308 sometime after 2020.

The PCU Gerald R. Ford CVN 78, located at Newport News Shipbuilding, will be the first of the Navy's next generation of aircraft carriers and is expected to accommodate some 2,600 sailors.

Trump's speech to a joint session of Congress, his first as president, included his past calls for repealing the "defense sequester," or across-the-board budget cuts instituted by Congress. He will need the repeal to achieve the kinds of increased defense spending that he is seeking.

Dozens of protestors lined up outside Newport News Shipbuilding, like Mary Holtz.

She's with Virginia Peninsula Now, an organization committed to countering sexism, racism and promoting the interest of women on the peninsula.

She quickly organized the protest after finding out about the President's visit.

“We're not going to stand for the destruction of our of our democracy and the hate or exclusion of anyone,” Holtz says. “I have a problem with the hateful rhetoric and the policies so far so I figured I wasn't the only one who would feel this way.”

While there were dozens outside against Trump, there were some who were there in support of the president.

“We just came to get a glimpse of the Donald,” Theresa McPherson says. “With him being here I think it shows his support for this area. This area has had layoffs and I'm sure people who have the skill sets are glad he's here.”

“This issue needs to be investigated,” McCollum says. “We won't sweep it under the rug, we need to shine a light on this situation so it doesn't happen again.”