Showers and storms leave behind damage in Newport News

Tuesday night's storm left behind some damage in Newport News. Lightning hit a tree, causing part of it to break off and fall on top of a home and shed. 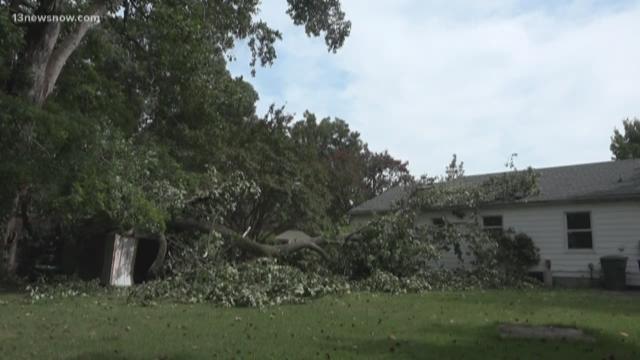 People in one Newport News neighborhood are breathing a sigh of relief.

Lightning hit a tree Tuesday night, causing part of it to break off and fall on top of a home and shed on Quince Circle, near Denbigh High School. David McReynolds and his wife own the property.

“I knew this tree, and I knew it was big, so I was concerned it damaged the house,” McReynolds said.

McReynolds said one of the neighbors sent him pictures of the damage. He and his wife and their grandkids rushed over Wednesday morning to check it out.

“I told the kids nobody got hurt and everything can be fixed,” McReynolds said. “They're just excited to see the branch down.”

There's no serious damage. The tree didn't go through the home, and limbs only damaged the gutter. There's also some damage to the fence.

“I am very fortunate that the house didn't get damaged, luckily it was vacant, which was a good thing,” McReynolds said.

One neighbor said this is not the first time a tree fell in this neighborhood.

“I thank the good Lord, my roommate usually parks on this side and happened to move their car before this happened,” Jason Morgan said.

McReynolds is thankful because he knows this could have been much worse.

“I think everything that was damaged can be fixed, hopefully,” McReynolds said.