Atlanta's City Council has decided to pass the Gulch Deal, which means Norfolk Southern could be leaving Norfolk.

ATLANTA (WVEC) — Atlanta's City Council has decided to pass the Gulch Deal, which means Norfolk Southern could be leaving Norfolk.

Mayor @KeishaBottoms thanks council members for approving #TheGulch deal. “History will be kind to us. We’ve done what Atlanta does best. Make sure that business and our communities are working hand in hand to make Atlanta better for this city.” @13NewsNow pic.twitter.com/S9xXrznZwP

Norfolk Southern could decide as early as Tuesday if it will uproot its corporate headquarters and move to Atlanta.

This is how the Atlanta City Council voted 8-6 in favor of Greenlighting the Gulch. Now we await word from #NorfolkSouthern @13NewsNow pic.twitter.com/XeuMYpsOh4

Speculation has been swirling for months about the Fortune 500 company’s future in Norfolk. The decision to leave hinged on a crucial vote scheduled Monday by the Atlanta City Council, which was passed.

Norfolk Southern CEO James Squires told the Atlanta Business Chronicle that moving to Atlanta is contingent on council members voting Monday in favor of developing 40 acres in the heart of downtown Atlanta known as "The Gulch."

Norfolk Southern has owned some of that land for decades. In order for the railroad company to finance moving its corporate HQ to Atlanta, Squires suggested it would first need to sell its land in The Gulch.

“We do own property in Atlanta which we have been seeking to sell for some time now. And that would be one aspect of headquarters relocation that would need to be resolved before we do it,” Squires said in the company's third-quarter earnings call in October.

The CIM group, a California developer, has proposed a multi-billion dollar development for The Gulch that would include commercial and residential space. If approved by city council, Atlanta would provide up to $1.75 billion in public financing to help with the development of the project.

And that's where controversy sets in.

Some residents have scoffed at the amount of money at stake. Opponents have a website titled "Red Light the Gulch," whereas supporters have labeled their side as "Green Light the Gulch." Both sides are expected to show up to the council meeting Monday wearing either red or green. 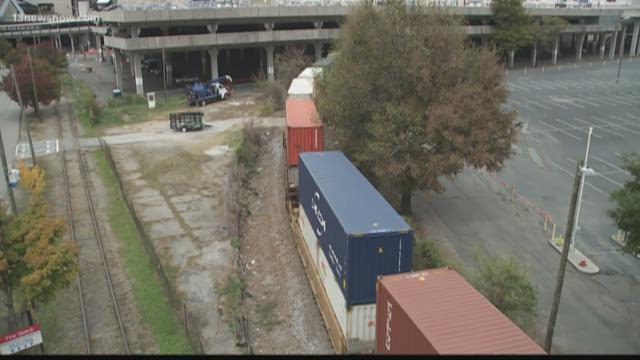 Squires confirmed to investors last month that the move was not a done deal.

“A number of aspects of the relocation still have to come together for it to become a reality for us,” Squires said.

Norfolk Southern is in the process of relocating its dispatchers to Atlanta. An online fact sheet says the railroad company has 4,710 employees in Georgia and 4,015 in Virginia.

In fact, the company is holding an “Investor Day” on February 11 in Atlanta.

“The impetus for headquarters relocation is alignment and teamwork. It's our belief that we will function more effectively as a team, we will be more aligned if we are in one place," Squires said in the earnings call.

A Norfolk Southern spokesperson told 13News Now they would have a comment after Monday's vote.

SRO at this Atlanta City Council meeting. There are 92 people signed up to speak. Buckle up, folks, we could be burning the midnight oil @13NewsNow pic.twitter.com/2R1c736i0s

WHAT'S AT STAKE FOR NORFOLK?

Atlanta has much to gain by adding its 16th Fortune 500 company, but does Norfolk have more to lose?

"This move is indicative of a much larger trend that we’re seeing. Atlanta has really become a mecca for Fortune 500 companies," Boyd said.

Boyd cited a "terrific" state business climate in Georgia, an abundance of workers in Atlanta with an IT skillset, and Hartsfield-Jackson International Airport with more non-stop flights to global markets than any other airport in North America.

"The reality now is there will be a number of highly-skilled professionals laid off by Norfolk Southern that aren’t going to be transferred to Atlanta that are now in the job market," Boyd said.

Norfolk Southern employs thousands of people in the Commonwealth and spends more than $200 million in purchases, payments, and taxes each year.

There are far-reaching economic impacts. The NS Foundation, for example, contributed $20 million to Virginia communities over the last five years.

Boyd said losing the major corporation would open up the opportunity for other companies that wish to expand or relocate to a city he calls "low-cost, pro-business."

“This is an opportunity for Mayor [Kenny] Alexander to really become the Salesman in Chief for Norfolk and to really make the case now for Norfolk being open for business. And to follow the example of other successful, job-creating urban mayors," Boyd said.

It's not clear what Norfolk Southern would do if the Atlanta City Council votes against The Gulch deal Monday. But Boyd believes the railroad company has already made its decision.

13News Now reached out to Mayor Alexander's office Friday but did not receive a comment for this story.