Norfolk city leaders celebrated the groundbreaking of what will soon be the second tallest building in Norfolk. 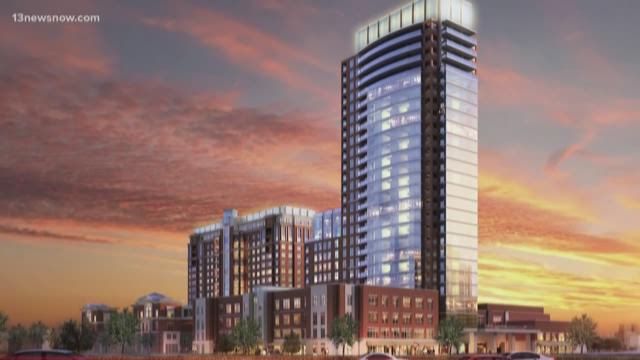 NORFOLK, Va. — Norfolk city leaders celebrated the groundbreaking of what will soon be the second tallest building in Norfolk.

The Harbor’s Edge $200 million River Tower expansion will stand at 24 stories, with views of Downtown Norfolk and the Elizabeth River.

Harbor’s Edge CEO Neil Volder said the location of the River Walk property is what makes the upscale retirement community so appealing.

“This area is the last 25 acres on the waterfront in downtown Norfolk,” said Volder.

The tower is located in the heart of Fort Norfolk, an area that is seeing an uptick in real estate development.

“Between downtown and Ghent, some of the highest valued real estate, it sits right there on the light rail line adjacent to the hospital so it’s a prime opportunity for development,” said Jared Chalk, Interim Economic Development Director with the City of Norfolk.

The Roebuck apartments just opened, and the Breeden Company plans on building a multi-family apartment complex.

However, the area is facing rising sea levels. Chalk said any construction in the area must take that sea level rise into account.

“Whether its elevated platforms, whether there’s some flood walls put up, it’ll be a variety of things,” said Chalk.

River Tower’s first apartments will be available in 2021.