In a meeting Tuesday, city council went through more details of what the potential casino will not only look like, but how it will impact the area. 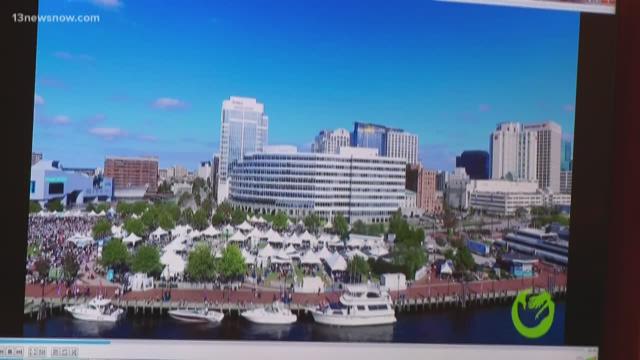 NORFOLK, Va. — The long-awaited details are finally out.

City of Norfolk officials shared the latest updates on a potential riverfront casino with City Council.

"I think this is a game changer. It puts Norfolk at the center of the mid-Atlantic for a tourist destination," said Jared Chalk, Interim Director of Development for the city.

In the meeting, officials said the $700 million Pamunkey Tribe casino will have between 3,500 to 4,500 slots, between 100 to 200 table games, as well as 500 hotel rooms, parking, and between three to five restaurants.

"A preliminary scope is a major resort casino, $700 million. This would be one of the largest development projects in Norfolk's history," said Chalk.

The Tribe's Chief, Robert Gray, said in a video he's excited to partner with the city to make this happen.

One of the major talking points is the economic impact.

Chalk said the tribe plans to purchase the land from the city for $10 million and the city won't be responsible to build any infrastructure.

"The tribe is paying for all of the infrastructure and the utilities," Chalk told council.

As far as what the casino will bring in, City Manager Doug Smith says the high end will bring in more than $800 million with $33 million of that going to the city. This is if the tribe chooses to make it a tribal casino versus a commercial casino.

A tribal casino means the tribe will get a tax break, but pay four percent of the annual revenue to the city.

"The deal requires that under circumstances, that we'd be paid less than $3 million a year," said Smith.

Smith suggested a public hearing on September 24, and for council to take up approval.

However, Councilwoman Andria McClellan challenged that, worried that's way too soon. She said she can only back this if there's money that goes to school and flooding.

More about the potential casino:

RELATED: Norfolk City Council goes all in on resort casino