Some people had to jump from second and third-story windows to escape the blaze. Six condos were completely destroyed. 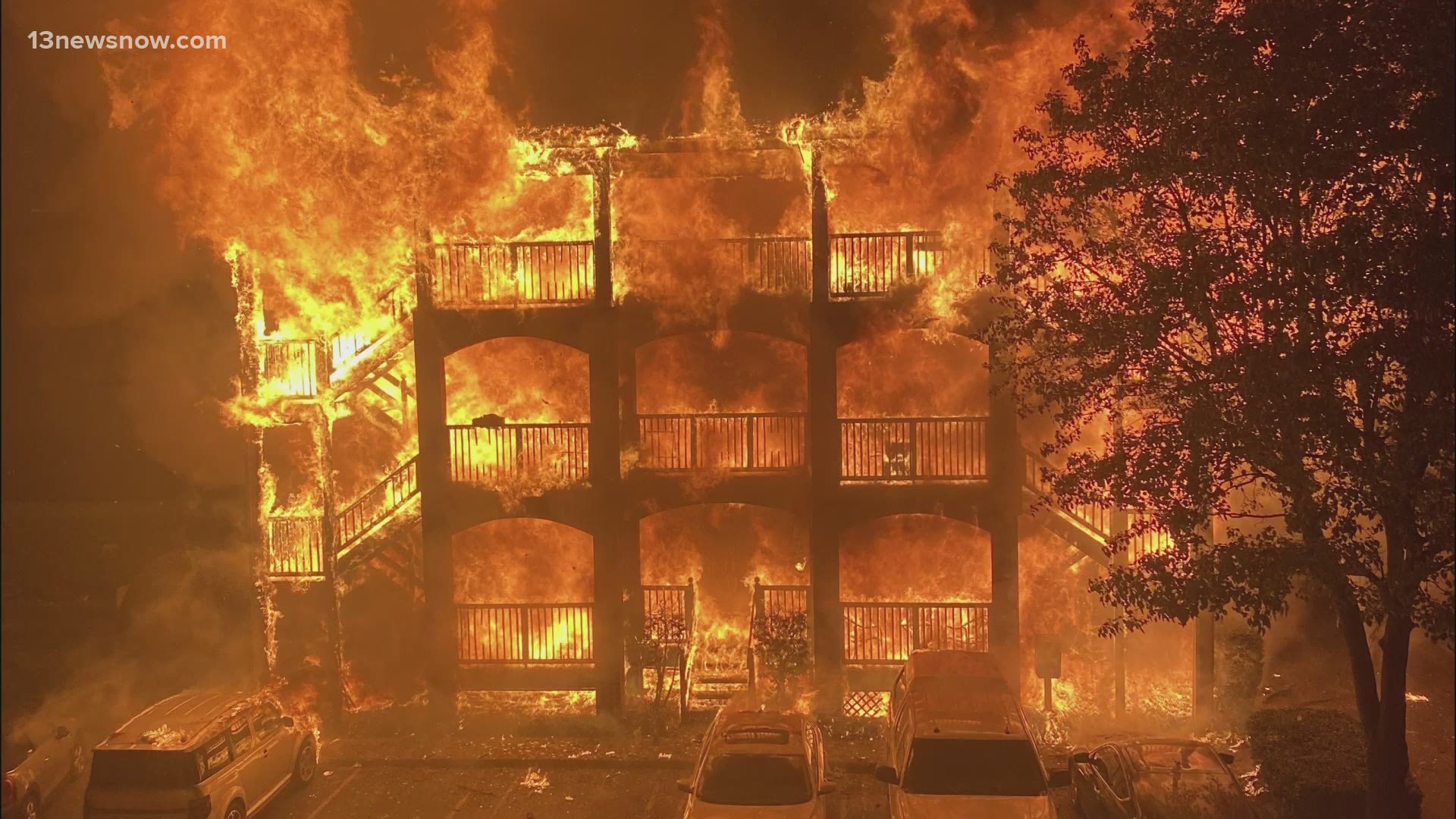 NORFOLK, Va. — Norfolk firefighters spent the early morning hours battling a massive fire at a condo building in the 400 block of Delaware Avenue.

Crews were called to the scene around 3:05 a.m.

An eyewitness photo shows flames engulfing all three stories, including the stairs, of the building.

That's the condition it was in when firefighters got there. Officials said the whole front side of the building was burning.

Some people were hurt when they jumped out of second and third-story windows to escape the fire. Flames were blocking the exits of six individual condos.

Two people had to be sent to the hospital after jumping out of their windows to escape the flames. Firefighters didn't detail the severity of their injuries.

Three other people were being checked for injuries at the scene, and are expected to be okay.

By 11 a.m., Assistant Fire Chief Gary Windley confirmed that all residents had been accounted for.

At that time, teams were still working on the collapsed structure, stamping out hot spots.

One neighbor, Benjamin Jiles, told 13News Now he woke up in the middle of the night to the roaring flames right across his window. He said when he looked outside, he saw two people jump out their windows from the second and third floors.

"I heard some voices in distress," Jiles explained. "Then I came outside and saw two people jump from the building. One had a ladder and they jumped. Then I went back to mine and I knocked on my neighbor's door telling them, 'get up, get up you need to get out.'"

Jiles said his car caught fire and his apartment has significant water damage, but is happy everyone is okay.

"At first, I said God is good because we all survived out of this - and I'm right at the point of getting ready to retire," Jiles said. "What an experience to have right at this point."

Windley said eight displaced residents would be helped by the Red Cross.

A spokesperson for the fire department said six units were completely destroyed in the fire. A fire wall in the building protected six other condos from the flames and potentially saved lives.

Some nearby buildings suffered heat damage and several cars in the parking lot caught fire. The condos are in the Colonial Place neighborhood near the Riverview neighborhood, right off the Lafayette River.

Expect delays around Delaware Avenue and Llewellyn Avenue while crews remain on scene.

Fire officials said they were confident everyone who lives there is accounted for, and teams will be going back in once it's safe to survey the damage.

The Fire Marshal's office is still working to determine the cause of the fire.