An SUV parked on Newport Avenue had a racial slur written across one of its windows. 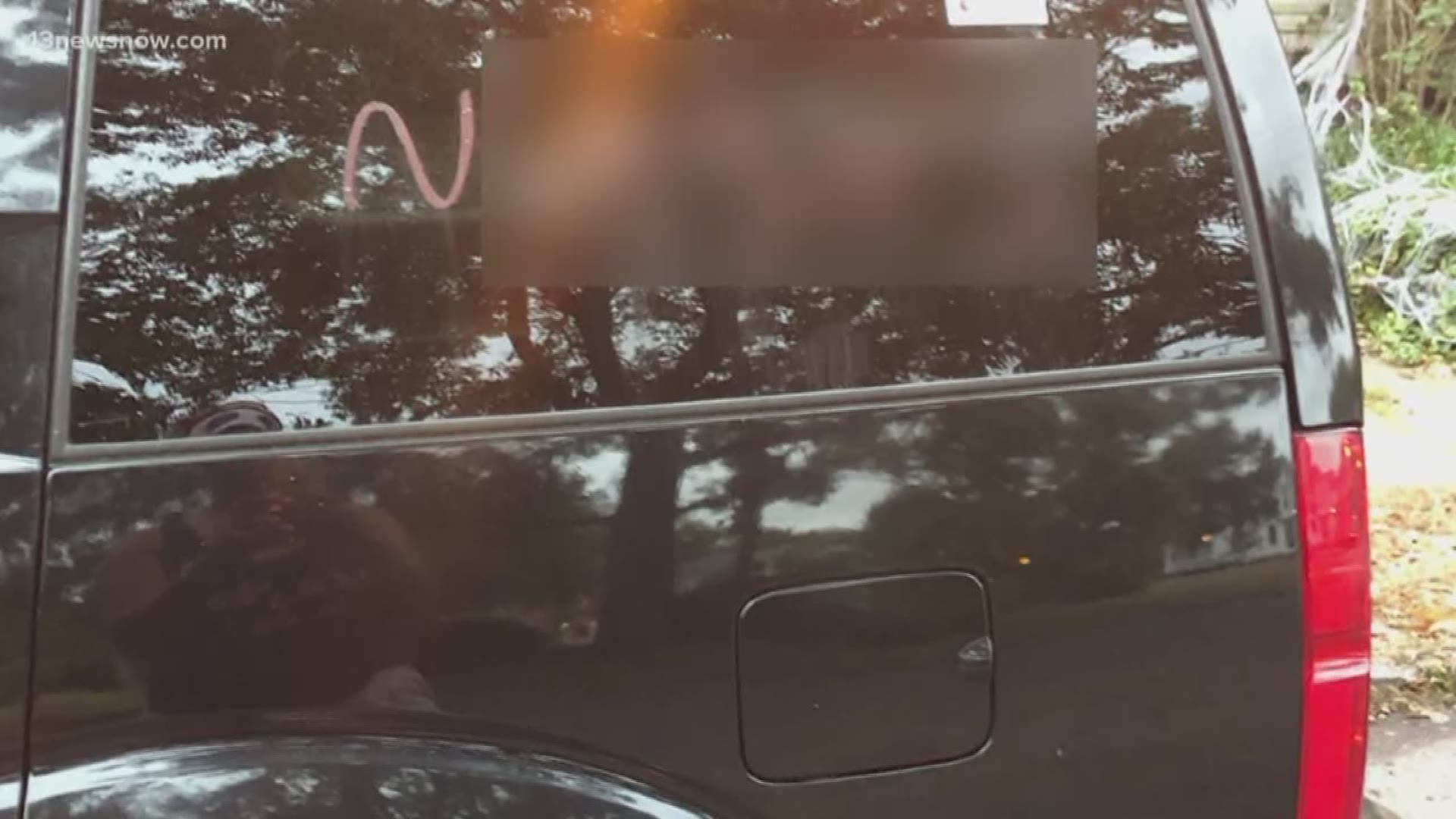 NORFOLK, Va. — The Norfolk Police Department is investigating a hate crime in the Colonial Place community.

On Wednesday around 8 a.m., Norfolk's Emergency Communication dispatch received a call for vandalism on Newport Avenue.

When police officers arrived on the scene, they found a parked SUV with a racial slur, a plural version of the 'n-word,' written across one of its windows.

An investigation was launched immediately by the Criminal Intelligence Unit, police said.

13News Now spoke with the owners of the vehicle, Dee and Matt Hall, an interracial couple who got married a few months ago.

"I was just really surprised. I was flabbergasted," Dee said, explaining that she was alerted to the slur by her kids as they left for school that morning.

"Well, of course, I was shocked, and then quickly attached to the shock was anger," Matt said.

The couple called NPD and eventually removed the word from what Dee refers to as her 'mom-mobile.' The family thinks it was written in lipstick.

"I've lived here for a decade. Nothing like this has ever happened," Matt said.

The Halls said they feel a bit uncomfortable in their own neighborhood now, but also well supported.

"I've never felt the need for security cameras until this," Matt said.

"It gives you the chills. I mean, this person was clearly watching my movements," Dee added.

After sharing the incident online, many in the Colonial Place community and beyond reached out to the couple expressing their outrage and sadness.

As 13News Now spoke with the couple Thursday, one neighbor stopped her car to express support to the Halls.

The local civic league released a statement saying this incident does not reflect the community and that hate is not welcome there.

"Whatever you were trying to do, it didn't work. This is my neighborhood. I'm not going anywhere," Dee said when asked what she would say to the person who did this.

Police have not released any other details surrounding this investigation.

Detectives ask anyone with information to call the Norfolk Crime Line at 1-888-LOCK-U-UP.

The City of Norfolk has reported 17 hate crime incidents since January 2010.

“I want the citizens of Norfolk to know that there is no such thing as a minor hate crime. Whether it’s in the form of a verbal threat, physical assault, or vandalism any kind of hate disrupts the very fabric of a safe and healthy neighborhood” said Chief Larry D. Boone. “We have come so far and worked too hard to allow any one person to destroy what many have fought for in the history of Norfolk. I assure you, my officers are actively investigating this crime and will not stop until we arrest the person responsible.”