Officer Seth Amos was hit with a life-threatening, mystery illness in September. He died October 19. 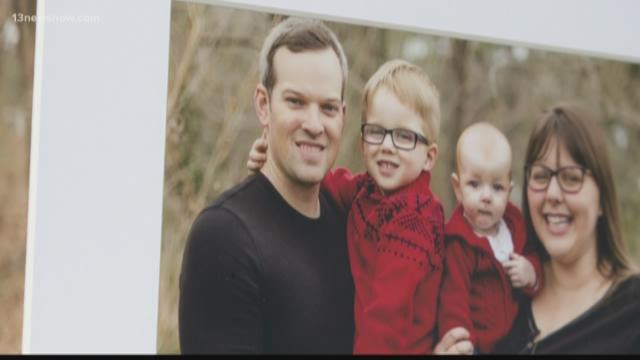 The Norfolk Police Department said one of its officers died on October 19 after fighting an unknown illness that affected his breathing. The department told people about Officer Seth Amos' death on Twitter Saturday:

Yesterday, Seth Amos was called home to be with his Lord and Savior Jesus Christ. Our love and prayers are with the Amos Family as they mourn and celebrate the time that God gave us with Seth. #sethstrong #AmosStrong https://t.co/KxOrn5r12U

Amos went to the emergency room five times in 10 days. He was admitted to the hospital on September 4 when he was unable to breathe.

"It started the first of September with really kind of an abscess underneath his gun belt, and from there it quickly evolved into then he's also having trouble breathing. He eventually got septic shock which is an infection that got in his bloodstream and eventually attacked his entire body,” said Chris.

The family is still waiting to hear what caused this to happen, but right now their focus is on staying Seth Strong and remembering him. Chris remembers checking up when his son first hit the streets as a police officer.

"I was the one up-all-night listening on the radio tuned into the channel they were working on and tracked them all night,” said Chris.

Seth's mom, Ann Marie said she always knew he would be a great officer after the family was in an accident when Seth was little.

"I said, 'everybody hold on,' and Jessie grabbed one side of the car, the seatbelts, and Hannah held the other, and Seth went just like this to hold him in. To the last day, looking out for others,” said Ann Marie.

Marie said Seth was an even better husband, marrying his high school sweetheart.

“They just had a true pure Godly love for each other they were committed. She just feels like she died with him,” said Ann Marie.

Together, the couple shares a 5-year-old and 15-month-old who Ann Marie said will always miss their father.

"He just kept waiting for Dad to come home to play with him again. He's just not going to do that, and it's just heart wrenching to know that,” said Ann Marie.

However, the family wants everyone to know they're thankful for the support and prayers along the way.