As more St. Paul's residents prepare to move out, some still don't have a place to go; Norfolk city leaders are making them a promise

On Friday, the Norfolk Redevelopment and Housing Authority held a press conference to give residents more information about their Right to Return policy. 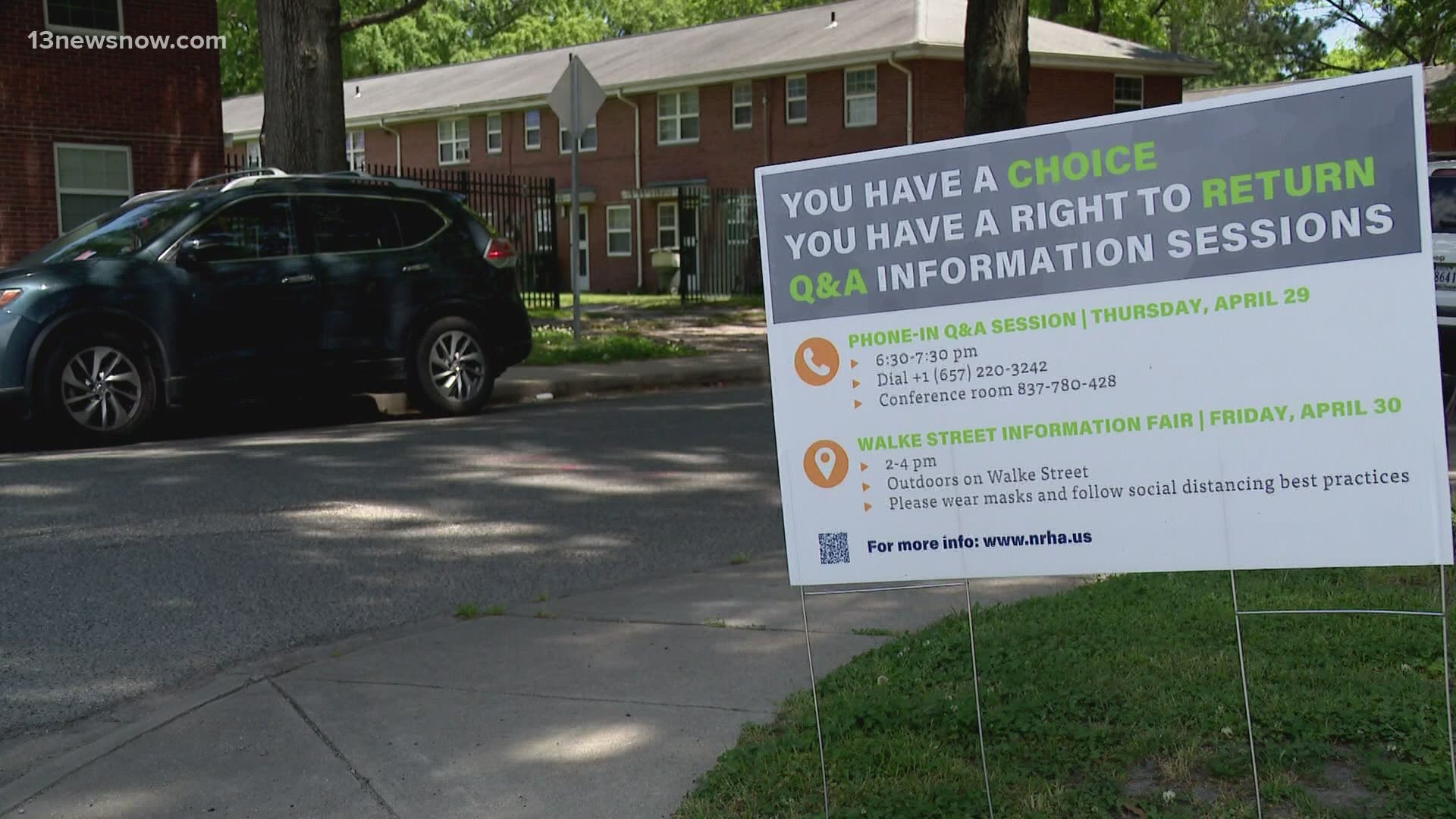 NORFOLK, Va. — As Norfolk city leaders push forward with their plans to redevelop the St. Paul’s neighborhood, they’re making a promise: everyone who moves out will have the right to return when the new units are built.

The city is redeveloping the barrack-style housing projects to make way for mixed-income communities.

In the Tidewater Gardens section of St. Paul’s, demolitions are underway and more families will have to move out this summer.

The city is giving residents the option to relocate to another community owned by the Norfolk Redevelopment and Housing Authority, or a voucher to move into private housing of their choice.

Robin Powell has lived in Tidewater Gardens for 18 years and said he has to move out this July. He has a housing voucher but is still in the process of finding a place to go.

“It’s more than tough,” said Powell. “Most places I’ve been checking have already been rented out. Some won’t accept the voucher.”

The clock is ticking for Powell and 293 other families in Tidewater Gardens who still have to move out.

Under a city ordinance, Norfolk city leaders and the NRHA have pledged that every resident who relocates will be able to move back when the new units are built. It’s the city’s Right to Return Policy. In order to return, residents will have to meet certain criteria, such as being compliant with their lease at the time of relocation and not owing any money to the NRHA.

Esther Hobbs, a resident of Tidewater Gardens, will have to move out this summer. She said she plans to return to the place where she raised her daughter once the area is redeveloped.

“Me and my daughter both. We’re gonna come back,” said Hobbs. "We're gonna relocate somewhere, I'm not sure, but we're on the right track."

Not everyone feels the same.

“Are we really gonna get what we're promised? Because, it’s hard for me to see it,” said Powell.

On Friday, the Norfolk Redevelopment and Housing Authority held an information session to discuss the Right to Return Policy with residents and answer questions.

13News Now asked Susan Perry, Director of St. Paul’s Redevelopment Project, what her response is to residents who question whether they’ll be able to come back.

“That’s why we're doing events like today. We want residents to know that by council ordinance, we are guaranteeing residents right to come back,” said Perry.

Under the city’s current plans, 710 of the new units in the St. Paul’s quadrant will be subsidized and low-income housing. City leaders say residents who had to relocate will be given priority to move in before the new housing opens up to everyone else.

Perry said part of the Right to Return plan includes assisting residents every step of the way. The city will cover any lease termination fees and moving costs for residents who decide to move back to the new communities.

The federal government gave the city a $30 million grant for the entire redevelopment project.

“What’s on my mind every single day is really, where are we going?” said Powell.